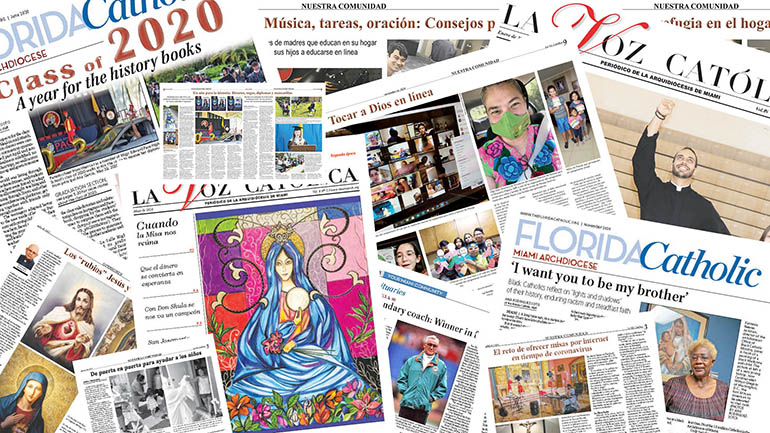 Images of some of the stories, published in 2020 in the Florida Catholic and La Voz Católica, that were honored by the Catholic Media Association in 2021.

MIAMI | The archdiocesan newspapers, the Florida Catholic and La Voz Católica, won a total of 19 awards at the Catholic Media Association’s annual conference, held virtually again this year. The awards recognize work done during the 2020 calendar year and were announced at the conclusion of the June 8-10, 2021 event.

The awards went not just to the newspapers’ staff — editor Ana Rodriguez-Soto and La Voz reporter Rocío Granados — but to most of the freelancers who report and photograph the news for south Florida’s Catholics.

“I maintain that I have the most talented, dedicated group of freelancers anywhere,” said Rodriguez-Soto, adding that “without them my work would be impossible.” 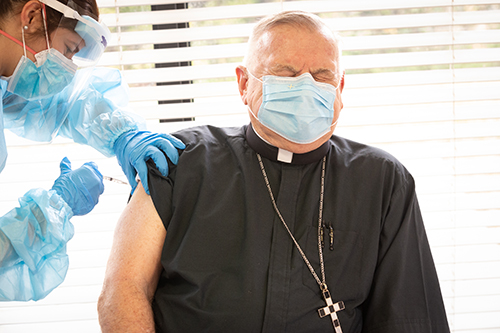 Freelancer Tom Tracy won an honorable mention in photography for a series of photographs depicting Archbishop Thomas Wenski receiving a dose of the COVID-19 vaccine when Florida state public health officials rolled it out Dec. 16, 2020 at St. John’s Nursing Center in Fort Lauderdale.

Given that the work was published in 2020, a lot of the stories dealt with the pandemic, including freelance photographer Tom Tracy’s series of shots of Archbishop Thomas Wenski getting the coronavirus vaccine in mid-December. The pictures won an honorable mention in the category of Best Online Photo Content Not Published in Print, since they ran on the website in December and in print in January of this year.

Rodriguez-Soto won first place in the category of Best Reporting of Social Justice Issues – Solidarity, for a story she wrote for Black Catholic History Month in November: “I want you to be my brother.”

The judges wrote: “Fine writing and good photos – but especially a message that the Church must live as well as preach: to see Black Catholics as full members of their spiritual community. Black Catholics still see their religious experiences as those of ‘lights and shadows’ – joy and disappointment.”

The newspaper won second place in Multimedia Package – Seasonal Issue for its coverage of the palm burning at St. Matthew Church in Hallandale, “From palms to ashes.” This was a joint effort — photos, video and story — by Rodriguez-Soto, Granados and Maria Alejandra Rivas, digital media coordinator for the archdiocese’s Office of Communications. “Interesting new multimedia story investigating historical and religious important events,” wrote the judges.

A print-only, Spanish version of the same story, that ran in the March edition of La Voz, also won second place for Rodriguez-Soto in Best Essay Reflecting on Faith Formation. “Very well written,” wrote the judges. “It is helpful in the way that she takes these two key events in our liturgical year and connects them to the life of the faithful. Which is what liturgy is all about.”

Another second place, for Best Online Content Not Published in Print — News, went to stories written by freelancers Tracy and Marlene Quaroni on a variety of topics: a PACT (People Acting for Community Together) effort to give civil citations rather than arrest first-time teen offenders; the difficulty of staying home when people need a job to pay the rent; a visit by HUD’s Ben Carson to a Catholic Charities senior center; the burden the pandemic imposed on the blind; and the weirdness of going back to school amid facemasks and plexiglass partitions.

“A range of interesting and important feature stories makes for a lively online publication that should bring Catholic readers back week after week,” wrote the judges. “Important stories for the entire community as well, such as what it means for a teen to have an arrest on his or her record and what is being done in the community to avoid that. Good photos, good quotes and all the other elements of good writing.”

Freelancer Cristina Cabrera Jarro won second place in Spanish for Best Reporting on a Special Age Group for her La Voz feature, “Una Adolescente, Un Robot, Una Misión: Mantener Conectados A Los Ancianos Aislados” (A teen, a robot, a mission: Keep isolated elderly connected), which ran in November. The story focuses on St. Brendan High School student Julianne Rodriguez, who built a robot to keep the elderly in nursing homes connected with their loved ones during the pandemic. The story also won an honorable mention in English for Best Reporting on a Special Age-Group - Children and Teens Younger than 18.

The judges wrote: “Cabrera Jarro has written an excellent piece making the faith (come) alive of this young person. It is well written and easy to read. I look forward to reading more from Cristina.”

Cabrera Jarro also won a third place for another La Voz feature, this one published in August: “De Puerta En Puerta Para Ayudar A Los Niños” (Going door-to-door to help children), focused on the efforts of the La Salle Educational Center in Homestead to keep the community, and especially its children, safe from COVID during the summer surge. The judges called it “a very moving story about help that is being offered in the community. She tells the story of the people in a way that is respectful and honest. Her writing is concise including important details but not bogging us down with things that aren't essential.”

Rodriguez-Soto won two third places, one for the Florida Catholic and the other for La Voz, in the category of Best Reporting on Catholic Education for her story, “Class of 2020: A Year for the history books,” a round-up of how the school year ended for seniors. The judges called it “a powerful piece on the class of 2020 that captures both the heartbreak and the hope that has sprung from the pandemic. Excellent, compelling writing that encourages readers to shift their thinking and celebrate the moments of joy and creativity that Catholic schools provided in these tough times.”

La Voz’s Granados won a second place for Best Reporting on Social Justice Issues - Life and Dignity of the Human Person for her story, “Nuevos Métodos Para Llegar A La Población Carcelaria.” The article focused on the archdiocese’s ongoing ministry to the imprisoned during the pandemic and ran in the September edition. The judges described the story as “very well written... interesting and affirming of those involved in the ministry... (It) would help others who aren't involved in the ministry to see it in a different light.”

She won another second place for Best Reporting on Social Justice Issues - Option for the Poor and Vulnerable, for her story, “Tocar A Dios En Línea” (Touching God online) which ran in La Voz’s November edition. It describes how young people from St. Hugh Parish in Coconut Grove and the Pastoral Juvenil Hispana (Hispanic Youth Ministry) teamed up with the U.S. bishops’ regional office and SEPI, the SouthEast Pastoral Institute, to lead a virtual summer camp for teens in Mississippi.

The judges wrote: “This was a really interesting column that really demonstrated the state of the world today. Throughout recent years and especially during the COVID-19 pandemic, utilizing the internet has become an increasingly important part of political engagement, education, socializing, and other key aspects of life. As the article states, however, many people are living in rural areas without reliable internet access which is a major barrier. The article was also inspiring as youth engagement was front and center.”

Orlando-based freelancer Lynn Ramsey won a third place in Best Sports Journalism – Sports News for his story, “Don Shula, 90: Winner in football and faith,” which ran in the May edition. The judges called it a “well-written look-back on a legendary football coach and how his faith carried him on and off the field. Good reporting does a service to the readers. We learn more about Don Shula.”

Freelancer Priscilla Greear won a third place for Best Reporting of Social Justice Issues - Option for the Poor and Vulnerable, for her story on St. John Neumann's Hope, Heart & Home group, “Foster Care Ministry 'Zooms' Ahead Despite Pandemic,” which ran in the November print edition.

“The strength of this feature about how the foster-care ministry has adapted to the COVID-19 pandemic is in the interviews with a foster parent and a volunteer who explain why their mission is so important to them,” the judges wrote. “The story emphasizes the needs of the children and how they are helped by individual relationships, which makes the piece feel direct and personal.”

La Voz also won a third place for Best Cover – Newspaper for its April, May and June front pages, which featured artwork by Noris Capín and photographs by Cabrera Jarro and were designed by Emanuel Publishing’s Manolo Villaverde. The judges praised the “clean construction ... with clearly defined creative elements.”

Palm Beach-based freelancer Linda Reeves won an honorable mention for the Florida Catholic for Best Reporting on Vocations to Priesthood, Religious Life or Diaconate - One Shot for her profile of a Cardinal Gibbons High School teacher, Piarist Father Ricardo Rivera, “Dancing Priest Steps Out In Faith, Wins Hearts,” in the January edition.

Rodriguez-Soto and freelancer Jim Davis also won an honorable mention for Best Coverage – Immigration for a package of stories: “Pandemic puts new citizens in limbo,” which ran in the June edition; and “Lawyer sees her work as calling from God” and “From Rome to America,” both of which ran in the October edition.

The print versions of the stories can be found at miami.thefloridacatholic.org. Click on the calendar and look for the month in 2020 when the article appeared.

Dolores Hanley McDiarmid - 07/22/2021 11:09 AM
Congratulations to all of you on the numerous awards you have received! How excited all of you must be! The Archdiocese of Miami is blessed to have people with numerous talents such as yours that use them for good. May God bless you with continued health,motivation, inspiration, and energy to continue serving our Church and community.