Ben Carson, U.S. Secretary of Housing and Urban Development, addresses those gathered for the groundbreaking ceremony for additional housing at Three Round Towers, a low-income housing development for the elderly located in Miami's Allappatah neighborhood. He visited Aug. 13, 2020.

Carson paid a visit to the center Aug. 13, 2020, as part of a groundbreaking ceremony at Allapattah's Three Round Towers elderly housing development, run by Miami-Dade Public Housing. The Malcolm Ross Senior Center, located in the housing complex, has provided hot meals to seniors for years.

"We occupy the community building and provide the congregate meal program to the residents and surrounding community," said Peter Routsis-Arroyo, CEO of Catholic Charities.

Miami-Dade County Mayor Carlos Gimenez, local officials and the project’s developer, Jorge Perez, CEO of The Related Group, spoke on the Malcom Ross center’s stage. They praised the $106 million public-private partnership that has provided funding for two new buildings and renovations to two of the three existing towers on the seven-acre site, built in the 1970s. A third tower has already been renovated.

The new building, Brisas del Este, will house 120 units and a parking garage onsite. The existing A, B and C towers have 391 units.

Aside from affordable housing, healthy food is an important factor in seniors' health. About 130 seniors came to the Malcolm Ross Center daily to eat and socialize before the pandemic, said Iani Carvalho, regional director of Elderly Services for Catholic Charities.

Malcolm Ross also serves as the agency's administrative office for all its congregate meal sites.

“We have 11 meal distribution centers throughout the archdiocese,” Carvalho said. “We distribute almost 5,000 meals per week.”

Due to COVID-19 precautions, those meals are now being dropped off at seniors' doors.

Secretary Carson said that when he was a boy his mother planted a vegetable garden in the backyard of their home in Detroit. He said a community garden at the housing development might be a good activity for seniors to grow fresh food on their own. 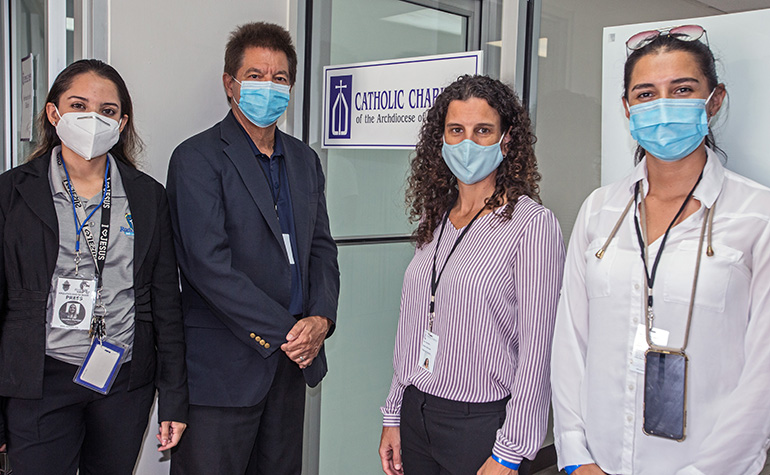