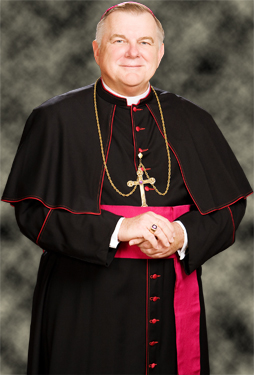 Archbishop Thomas Wenski describes the priesthood as a constant state of sacrifice. Which is not to say that he regrets any of his more than 40 years in ministry.

âItâs the best work you can do,â he said. âYou give yourself to God and Godâs people.â

A lifetime of giving certainly has not diminished Archbishop Wenskiâs sense of humor. He loves to joke (in three languages), rides a motorcycle for relaxation and has been known to puff on a cigar now and then.

Born in Lake Worth, Florida, the blond, blue-eyed son of Polish immigrants, he speaks Spanish like a Cuban, Creole like a Haitian and, ironically, only âlimitedâ Polish. He first thought of becoming a priest as a third grader at Sacred Heart School in Lake Worth and entered St. John Vianney Seminary in Miami at age 13.

He learned Spanish from classmates there and at St. Vincent de Paul Regional Seminary in Boynton Beach, as well as by listening to Cuban radio stations and hanging out in Hialeah and Little Havana.

Ordained in 1976 by Miamiâs first bishop, the late Archbishop Coleman F. Carroll, Archbishop Wenski thought he would be working with Hispanics all his life. Then he arrived at Corpus Christi Parish in Miamiâs Wynwood section and found a group of 40-50 Haitians who gathered regularly for Mass and prayer.

âThey filled that church with song,â he recalled.

His conviction that every group needs to be ministered to in its own language compelled him to back his words with actions. So he took a course in Creole, and when Archbishop Emeritus Edward A. McCarthy found out, Archbishop Wenskiâs fate was sealed. After spending a summer in Haiti learning Creole, he spent the next 18 years working with Miamiâs growing Haitian community, a role which made him concurrent pastor of three missions: one in Miami, one in Fort Lauderdale, another in Pompano â all of which he founded.

He often traveled as far away as Winter Haven, Fort Pierce and Immokalee to celebrate Mass with Haitian communities, a commute which spurred him to earn a pilotâs license. His ministry also included frequent visits to the Krome Avenue Detention Center, where newly-arrived refugees often languished for months.

Archbishop Wenski quickly became known as an outspoken advocate for Haitians not only within the Church but in the community. The Pierre Toussaint Haitian Catholic Center, which adjoins Notre Dame dâHaiti Mission in Miami, provides day-care, English classes, legal advice and job referrals to Haitian immigrants.

As if his duties as a circuit-riding pastor were not enough, he learned desktop publishing and single-handedly put out the nationâs first Creole-language newspaper, Lavwa Katolik (The Catholic Voice). In 1993, he also earned a masterâs degree in sociology from Fordham University.

The archbishop traces his strong convictions on social justice issues to his upbringing as the child of Polish immigrants and the word made famous by a Polish pope: Solidarity.

âI come from very simple stock,â he said, joking that Lake Worth is a far cry from West Palm Beach, let alone Palm Beach. His father worked with his hands, âhe had callouses and sunburnâ and he drank beer, not cocktails.

While the Catholic Church in the United States started out as a Church of immigrants, more and more Catholics are now middle-class suburbanites, Archbishop Wenski said. âIt was easy for that newly middle-class Church not to see the newcomer who was poor. Since the Gospel is for all men and women, we have to make it present to all.â

In 1996, that meant even Cubans on the island. Despite loud objections from some in the exile community, he spearheaded a relief operation that delivered more than 150,000 pounds of food to Caritas Cuba for distribution to people left homeless by Hurricane Lily. It was the first time that Miamiâs Cubans had undertaken such a humanitarian relief effort for their compatriots.

Becoming auxiliary bishop of Miami in 1997, and subsequently being named head of the U.S. bishopsâ Committee on Migration, allowed Archbishop Wenski to broaden his advocacy. In 2003, the committee and its Mexican counterpart published âStrangers No Longer: Together on the Journey of Hope,â a first-ever joint pastoral statement urging better treatment of Mexican immigrants in the U.S. Archbishop Wenski also has traveled as far away as Korea and the Congo to study the plight of refugees. And he has been heavily involved in PROCHE, the international Partnership for Church Reconstruction in Haiti in response to the January 2010 Port-au-Prince earthquake.

After being named coadjutor bishop of Orlando in 2003, and taking over as bishop in 2004, Miamiâs ânative sonâ returned to South Florida in 2010 as the archdioceseâs fourth archbishop. He quickly moved to reopen some parishes that had been closed due to the 2009 financial crisis, and launched a second archdiocesan synod in 2012. It concluded in October 2013 with a Strategic Pastoral Plan which began to be implemented in 2014.

He continues to speak out as strongly for immigrants as for the unborn, and urges Catholics to set an example of holiness in a world full of outrage and divisiveness.

As his episcopal motto, taken from St. Paulâs letter to the Corinthians, states, Archbishop Wenski has âbecome all things to all in order to save at least some.â

âThat is what Iâve tried to do,â he said. âTo save souls for Christ, and hopefully in doing so, to save my own soul.â

Omnia Omnibus (1 Corinthians 9:22): âI have become all things to all in order to save at least someâ