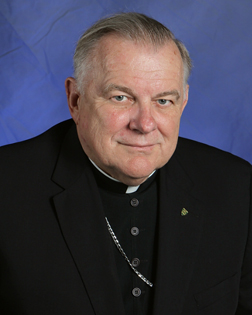 Born Oct. 18, 1950, in West Palm Beach, Archbishop Wenski is the son of first- and second-generation Polish immigrants. He attended Sacred Heart School in Lake Worth and in ninth grade entered what was then the high school seminary of St. John Vianney. He continued his studies at St. Vincent de Paul Regional Seminary in Boynton Beach and was ordained for the Archdiocese of Miami on May 15, 1976. He was named auxiliary bishop of Miami in 1997; coadjutor Bishop of Orlando in 2003; and will assume his duties as Archbishop of Miami and Metropolitan of the Province of Florida on June 1, 2010.

Born in a storm:

âHis birth took place âduring the middle of Hurricane King. When I was growing up in Lake Worth my mother would talk about how difficult it was to get to St. Maryâs Hospital in West Palm because of the rain, wind and downed power lines.ââ

Sometime during the third grade âI began telling people that I wanted to be a priest.â

âI am not sure, but one memory I have is when I was in the second grade my parents took me to the wake of our pastor, the priest who baptized me, Msgr. James Cann. (His nephew is Father Carl Morrison, a Miami priest). ... I still remember vividly seeing him laid out in the casket in church and what impressed me was the fact that he was dressed in his vestments as if he were about to celebrate Mass. âA priest foreverâ¦ââ

âItâs hard to say â since Iâve always had a hard time imagining me doing anything else. Nothing else ever held the allure or the excitement that priesthood offered me.â

âPerhaps the one I did the longest. I spent 18 years as a parish priest among the Haitian communities of south Florida. âFavoriteâ doesnât mean it was necessarily the easiest but it afforded me the opportunity to work among the poor and disenfranchised and to be in a sense âa missionary priestâ in my own backyard.â

âNothing else ever held the allure or the excitement that priesthood offered me.â

âWhen John the Baptist introduced his disciples to Jesus he said, âHe must increase and I must decrease.â I think thatâs always been for us the challenge - to get out of the Lordâs way so that our failings, our idiosyncrasies, our own ego does not distract our people from encountering Jesus in and through our ministry.â

âThe ideal Christian, priest and bishop I have encountered has been John Paul II. He was a man happy in his own skin, proud of his ethnic and cultural identity as a son of the Polish nation, and totally given over to Christ.â

âA lot of times, since I am so busy on my days âon,â I just like to chill and do nothing; but, if I have the time and the weather is good, a motorcycle ride helps clear the âcobwebsâ from the mind. Itâs exhilarating and, believe it or not, relaxing.â 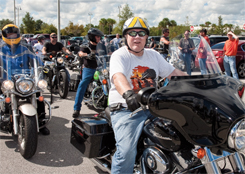 Bishop Wenski, shown here leading the "Bike with the Bishop" fundraising run in Orlando in 2009, says âa motorcycle ride helps clear the âcobwebsâ from the mind.â

âWhen I get the time to watch TV, I like âHouse."

"What Your Money Means - And How to Use It Wellâ by Frank J. Hanna. âNot that I have any money to speak of, but Hanna writes from the conviction of his Catholic faith about how he and other persons of influence and affluence can avoid the dangers of wealth and in fact use it as a school of virtue."

âOn the CD player in my car, I have a disk of Polish folk songs, one of Haitian âKompa,â one of Cuban salsa and one of Gregorian chant.â

âTo pass on the priesthood of Jesus Christ through the laying on of my hands when I ordain someone a priest.â

âThat despite my shortcomings and human weakness I was ordained a priest 34 years ago.â

âProbably that person who wrote the last angry letter to me - today, many people are angry and frustrated and itâs amazing how vehemently and often uncharitably people will disagree with something I say in my capacity as a bishop and teacher of the faith.â