A teen, a robot, a mission: Keep isolated elderly connected 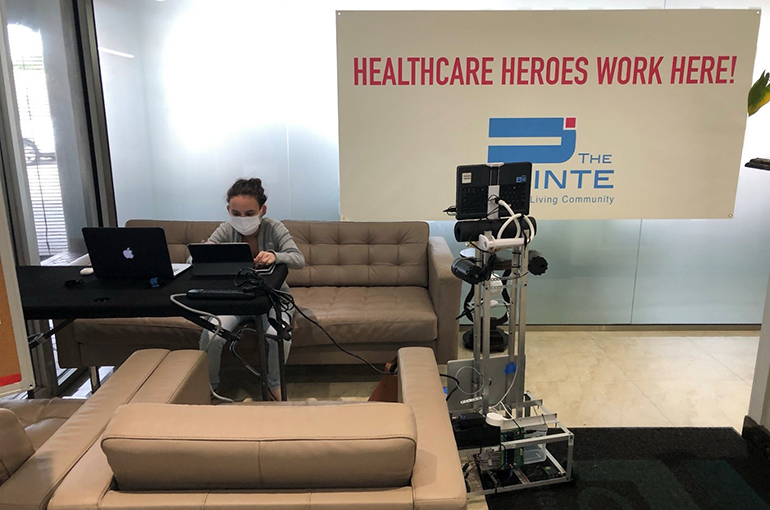 Working in the lobby of The Pointe Assisted Living Community, Julianne Rodriguez prepares the telepresence robot for action. The high schooler designed the robot as a means of connecting the elderly, kept in isolation as a precaution during the COVID-19 pandemic, to their loved ones via Zoom or Facetime. The initiative also inspired her to launch the service as the non-profit Reunite Foundation.

MIAMI | As a child, Julianne Rodriguez loved playing with Legos.

“Those Lego pieces, they’re just pieces of plastic. And the amazing thing is how you can put them all together and make something so cool, like a spaceship," said the 17-year-old St. Brendan High School senior. "You put them together and they come to life from something in your imagination.” 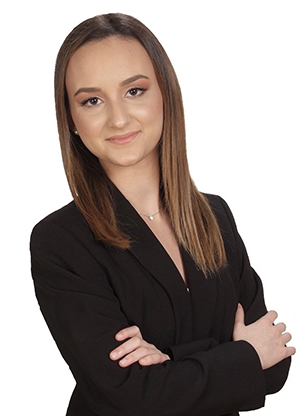 From telepresence robot to non profit: Julianne Rodriguez poses for a professional business photo she will use to accompany communications related to her non-profit Reunite Foundation.

Building with Legos was just a preview. During her time at Blessed Trinity School in Miami Springs, she built her first robot, a simple model that could detect and react to light and color. In the sixth grade, while helping her dad build a fence in their yard, she discovered she could continue designing, creating, and building if she pursued a career in engineering. In the eighth grade, her interests in engineering also steered her in the direction of flight training.

“I loved airplanes and just thought 'How did that thing get up there in the sky?' It was just so fascinating to me,” she said.

“I realized that this was something I had to do for the rest of my life,” added Julianne, who hopes to fuse her passions into a career as an aeronautical engineer.

In the meantime, the chance to put her talents to work solving real-world problems came sooner than expected. In March, during the COVID-19 quarantine, her family brought up a conversation about how the elderly living in senior facilities and hospitals were experiencing isolation, even though it was for their own safety.

“The biggest issue that many of the elderly faced was loneliness. Loneliness has such a detrimental impact on one’s health. And many of the elderly don’t really know how to use technology, might not have access, or have Alzheimer’s or dementia. There was a barrier,” said Julianne.

A technological barrier that she wanted to break to help keep the elderly connected to their loved ones. The thought of a telepresence robot sparked her imagination. Combining her passion for engineering, robotics and programming with the builder’s mindset instilled by her father, she started working on a prototype.

A telepresence robot built and controlled by Julianne Rodriguez waits by the elevator inside The Pointe Assisted Living Community. The robot will make its way to the room of a resident, so that residents can video conference through Zoom or Facetime with their loved ones.

Julianne experimented with several pieces of tech donated by her family. She also invested in VEX Robotics parts and wheels, which would allow the robot to move via remote control. She then built a metal frame to hold up a tablet that functions as a monitor, with a built-in mic, speakers, and a 350-degree camera that allows for side to side viewing. She chose Zoom and Facetime as the teleconference platforms.

“That’s what I love about engineering. It’s using all of the resources that you have to make something incredible,” said Julianne.

Once completed, she pitched the idea of the telepresence robot to several facilities and hospitals. The Pointe Assisted Living Community in Coral Gables allowed her to test things out.

“I was so fortunate to have them be the first because they were so supportive,” said Julianne.

Using her laptop and joystick, Julianne maneuvered the robot from the lobby of the center, never coming into contact with the elderly residents. Staff or personnel guided the telepresence robot to the resident's room, and from there they connected with family or friends.

“Being able to see their loved ones' faces, and being able to blow a kiss to them, they were extremely appreciative of the invention, and the effort that was put into the robot,” said Julianne.

Among the residents who have benefitted from the invention is 76-year-old Vilma Quintana, who was able to see and talk to her daughter, Marité Sixto, after weeks of distancing.

Julianne Rodriguez works on the frame of the telepresence robot she designed. Once assembled, the robot will move via remote control, and have a tablet, built-in mic and external speakers to connect the elderly, kept in isolation as a precaution during the COVID-19 pandemic, to their loved ones via Zoom or Facetime. The initiative also inspired her to launch the service as the non-profit Reunite Foundation.

“Julianne’s an obviously extraordinary young woman, seeing as she engineered an empathetic robot in order to help us reconnect with our loved ones whom we missed dearly due to this horrific pandemic," said Sixto. "As a teacher, I am always impressed with young people like Julianne who go out of their way to try and improve the lives of those in their respective communities.”

Eva Villena, Julianne’s math teacher at St. Brendan, also was amazed by her student’s ability to understand course material and connect it to real world applications.

“There is no doubt that God has blessed Julie with many gifts, one of which is intelligence. She has run with the talents God has given her and used them to better the lives of the elderly during this difficult time," Villena said. "She exemplifies love and compassion in action.”

Witnessing the success of the interactions, Julianne realized her project could make a tremendous impact in the lives of many seniors in nursing homes and assisted living facilities. She decided to invest in a larger-scale vision and established the Reunite Foundation, which filed as a nonprofit corporation in June.

“I have so much faith in the future of this corporation. I think it’s going to help a lot of people. Especially with recruiting volunteers, a lot of people are going to want to speak with these elderly, and I hope to train them so that they can speak with them, and offer a human connection,” said Julianne.

She values the wisdom of the elderly, as well as the stories and memories they are often eager to share with younger generations. After spending time with her grandparents, Julianne often feels the need to remind her friends to call their own grandparents.

“It’s so important because we have to connect with them and communicate with them,” she said.