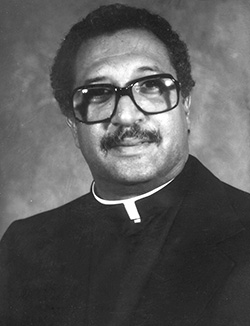 "Remember, I'm the one who loves the opera and not the bongos," he would tell Father Fernando Heria, then pastor of St. Brendan Church in the Westchester section of Miami-Dade County.

The two worked together at the parish for 12 of the 14 years that Father Heria was pastor there. He is now rector of the Shrine of Our Lady of Charity in Miami.

"He was funny in his own way. A man of few words. He was always very concise," recalled Father Heria.

Father Cabrera died Sept. 8, 2020, at the age of 86 due to dementia and other ailments or, as Father Heria put it, "arteriosclerosis, as they would say in Cuban."

He had been a priest for 47 years and had been living at St. Brendan since his retirement from fulltime ministry in July 2008.

"He was very mellow, down to earth. He was excellent with the elementary school kids in confessions. They adored him," Father Heria said.

He noted that Father Cabrera "loved to read" and had probably "the largest collection of books" of any priest he knew.

He also liked to take walks around the St. Brendan property, and although "he was very private," Father Heria said, he loved to go to the neighborhood La Carreta, on Bird Road and 86th Avenue. "Everybody knew him there."

Born Dec. 12, 1933 in Havana, Father Cabrera obtained a degree in arts from the University of Havana, then studied at seminaries in Puerto Rico and the Dominican Republic before obtaining a degree in philosophy from the Pontifical Seminary in Santiago de Chile. He studied theology in both Chile and at the major seminary in Caracas, Venezuela, and was ordained March 24, 1973 for the Archdiocese of San Juan, Puerto Rico. After ordination, he served three years as pastor of a parish in Toa Alta, Puerto Rico.

"Puerto Rico was his first love," Father Heria said. "There are young people there who love him, who adore him like a grandfather."

Still, after serving at St. Cecilia Parish in Hialeah during the summer of 1976, Father Cabrera moved to the Archdiocese of Miami in January 1978. He was named parochial vicar at Our Lady of Guadalupe Church in Immokalee and served there for four months before moving back to St. Cecilia, where he served from the end of May 1978 to July 1984.

He was incardinated — made a priest of the Archdiocese of Miami — in August 1988.

Father Heria recalled that Father Cabrera's mother and two sisters remained in Cuba, and "he would send a large portion of his salary to his family in Cuba."

A huge consolation, Father Heria noted, is that Father Cabrera "had enormous devotion to Our Lady and she came to take him on her feast day."

Father Cabrera is survived by a nephew and a cousin in Miami.