MIAMI | Exactly 21 years to the day after parachuting into Cuba for the ill-fated Bay of Pigs invasion, Father Sergio Carrillo was ordained a priest for the Archdiocese of Miami.

Leading the singing of the Cuban national anthem after the ceremony: then Father Thomas Wenski.

Father Carrillo was 48 and had already endured more than a year in a Cuban prison, exile from his homeland and racial discrimination in 1960s Miami. But his desire to serve God and the Church never wavered. 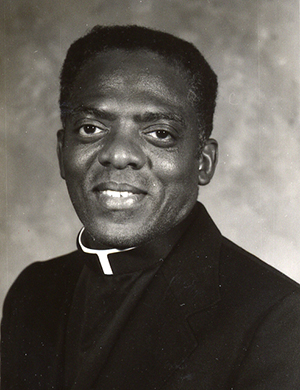 "The faith becomes more alive, the ideal becomes firmer, when you see injustices done to your own flesh, to the flesh of your friends," he told The Voice, the archdiocesan newspaper, a few days before his ordination in 1982. "That gives you a deeper love of your country and strengthens your desire to work for the social justice teachings of the Church."

On April 17, 1982, Father Carrillo became the first black priest ordained for the Archdiocese of Miami. He died July 9, 2020 at St. Anne's Nursing Center in southern Miami-Dade County of complications from Alzheimer's.

Father Carrillo was ordained at St. John the Apostle Church in Hialeah, where he also served from 1985 to 1989 and for six months as a deacon. From 1982 to 1985, he served at the National Shrine of Our Lady of Charity while in residence at nearby St. Hugh and St. Kieran in Coconut Grove (1982-85). He later served at St. Andrew in Coral Springs (1989-90); St. Raymond in Miami (1990-92); and as a chaplain at Jackson Memorial Hospital while in residence at Corpus Christi Church in Miami, from 1992 until his retirement from fulltime ministry in 1999.

From 1989 to 1997, he served as chaplain of the archdiocese's Catholic Committee on Scouting. He told I in that pre-ordination interview that his love for the Boy Scouts — he had been a member for 31 years at that point — and desire for the priesthood both arose at the same time: as a young child in his native Havana.

The Boy Scout leader at his parish there had a great deal to do with both. Manuel Artime was a devout Catholic who rose to captain in Fidel Castro's Revolutionary Army. He influenced the young Carrillo to join the Comandos Rurales (Rural Commandos), groups of young people, mostly Catholic university students, who taught peasants to read and write while working on agrarian reform.

Within a year of the revolution, Artime had soured on Castro, sought exile in the U.S. and begun planning the campaign that culminated in the Bay of Pigs invasion, April 17, 1961.

Carrillo fled too and began training for the Bay of Pigs in Guatemala. He served as squadron corporal, paratrooper, medic and assistant to the chaplain at the invasion. Captured along with hundreds of others, he was released in December 1962 via the prisoners-for-medicine exchange agreed to by Castro and U.S. President John F. Kennedy.

In Miami, more hardship followed. Father Carrillo recalled living with 20 other friends from the invasion in a house in southwest Miami and often going hungry. But the worst part was the racism he encountered.

"It was dangerous to go out at night because (by 6 p.m.) blacks had to go to the other side (the northeast section)," he told The Voice. But Carrillo could not go there because he didn't speak a word of English. During the day, "I couldn't go out with my friends either (who were white Latins) because where they went, I couldn't go."

Finally, unable to enter the seminary here because he could not speak English, and discouraged by the racism and lack of economic opportunity, he moved to California, where he spent the next 13 years working for the Church, active with the Claretian fathers in Los Angeles and leading parish youth groups.

He began studying to become a social worker but decided in 1975 that it would be "better to work for God." He entered St. Mary's Seminary in Kentucky, and when it closed in 1976, he moved to St. Vincent de Paul Regional Seminary in Boynton Beach. With the permission of Miami's then archbishop, Edward McCarthy, Father Carrillo completed his last two years of study at the National Seminary of Christ Priest in Colombia.

Throughout his years of ministry, he never wavered in his convictions: his love for the Church, his love for his homeland, and his beliefs about the role of a priest:

"I believe firmly, in accordance with the teachings of the Church leaders, and Pope John Paul II, that priests should not get involved in politics," he said back in 1982. "But we should proclaim injustices and defend the rights of the poor and the humble, even though this might cost us our lives."

Father Carrillo, one of six brothers and sisters, is survived only by a sister, Nieves, and nieces and nephews, all of whom remain in Cuba.

Watch an interview with Father Carrillo conducted at the University of Miami here.

Maria Maguire - 07/16/2020 01:56 PM
What a wonderfully inspiring life! May the Lord reward him for all his loving work in the Church and fighting for Cuba's freedom. Now from heaven he will be interceding for the ensalved and suffering Cuban people. Well done, faithful servant!

Noel Alonso - 07/13/2020 06:59 AM
Father Sergio, you touched so many lives with your kindness, empathy and humor. You were many things in your life, so accomplished even after retiring and an inspiration to our Cuban exile community and the community at large. Personally, you meant the world to our family and I thank you for being a shining light in my life. May you Rest In Peace.

Carmen San Juan - 07/11/2020 03:51 PM
I am 78 years old, my 2 children went to St John the Apostle school since Kindergarten, after they graduated we kept going to st John for mass and activities , I was present at father Carillo’s ordination, we used to call him st Martin de Porre, He was the best, May He RIP ... I absolutely now he is in agraven .. nice memories of him ðð»ðð»ðð»ðð»