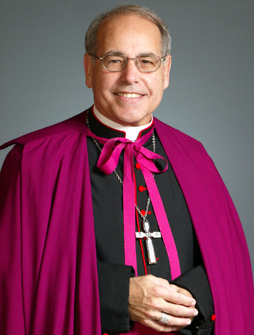 Bishop EstÃ©vez was born February 5, 1946 in Havana, Cuba and arrived in the United States on a Pedro Pan flight as a teenager. He was ordained in 1970 and has done extensive studies in Spiritual Theology, earning a doctorate from Gregorian University in Rome. He is fluent in English, Spanish, French and Italian.

From 2001 to 2003, Bishop EstÃ©vez served as spiritual director of Saint Vincent de Paul Regional Seminary in Boynton Beach, where he had served as rector from 1980 to 1986. He was pastor of Saint Agatha Parish in Miami for 14 years, while also directing the Campus Ministry at Florida International University.

Appointed Auxiliary Bishop on November 21, 2003, and ordained January 7, 2004, he oversees the archdiocese's Ministry of Pastoral Services including family life, youth, campus, prison and Respect Life ministries, as well as all the apostolic movements.

In 2010, under the leadership of Archbishop Thomas Wenski Bishop EstÃ©vez was appointed Vicar General of the Archdiocese of Miami.He remained in that position until assuming his new role as Bishop of the Diocese of St. Augustine on June 2, 2011.

Explanation of the coat of arms of Auxiliary Bishop Felipe de JesÃºs EstÃ©vez:

Jesus Christ is the source and purpose of the episcopal ministry, which participates in his selfless love for the Church (Eph 5:25). The eternal Son is sent by the invisible Father to reveal that he loves us to the end (in finem dilexit eos, Jn 13:1).

In this coat of arms, two hands come from above in majestic verticality, to express the gratuity of this mission by the Father which is the central fact of Christian revelation. These hands also express what is most familiar in our gestures of communication. The image echoes the prayer: "When we were lost and could not find the way to you, you loved us more than ever; Jesus â¦ gave himself into our hands"

(Mass of Reconciliation I)

The Word became flesh (Jn 1:14). The hands express the utterly humble condescension of his divine love: "He emptied himself â¦ coming in human likeness â¦ becoming obedient to death on the cross" (Phil 2:7-8). The wounds in Jesus' hands express his saving death for our salvation. These wounds are a saving place for all sinners, a place of rich mercy for all. Contemplating this mystery, Ignatius of Loyola exclaimed: "In your wounds hide me." Jesus' wounds are glorious because they, too, participate in the resurrection of the Lord of glory. Showing forth his wounds, the Risen Lord invites the unbelieving apostle to "put your finger here and see my handsâ¦. Do not be unbelieving, but believe"

In his hands he holds the earthly gifts of wheat and grapes in honor of the Creator of heaven and earth. The image also affirms the goodness of the fruits of the earth and of the work of those who till the soil. The inspiration for this comes from an ancient document called the Didache (or "Teaching of the Apostles", ch. 10): "You created all things to the glory of your name and gave men the satisfaction of food and drink for their enjoyment so that they give you thanks. But to us you gave spiritual food and drink and eternal life by your Servant."

The Eucharist is thus seen as the sacrificial banquet: "In this gift, Jesus Christ gave the Church the perennial actualization of the paschal mystery â¦ which is included, anticipated and concentrated forever in the Eucharistic gift"

The dove represents the efficacious activity of the Holy Spirit in the work of our sanctification. As St. Ephrem the Syrian states: "He called bread his living body, he filled it with himself and with his Spirit" (Homily 4 for Holy Week). The Spirit is the true source of renewal and transformation of the world.

The light blue color which serves as backdrop seeks to honor Mary, the Mother of the Lord. Her fiat ("Let it be done to me according to your word," Lk. 1:38) made possible the incarnation of the Son, and her prayerful and unique presence in the paschal mystery enables us to call her the woman Eucharistic.

The cross is a replica of the Great Cross which towers over Mission Nombre de Dios in St. Augustine as a reminder of the humble beginnings of Christianity in this new land in 1565. The cross links the episcopal story of Bishop Estevez to the antecedents of evangelization in Florida, in which the church in Cuba played such a vital role.