They cheer for each other 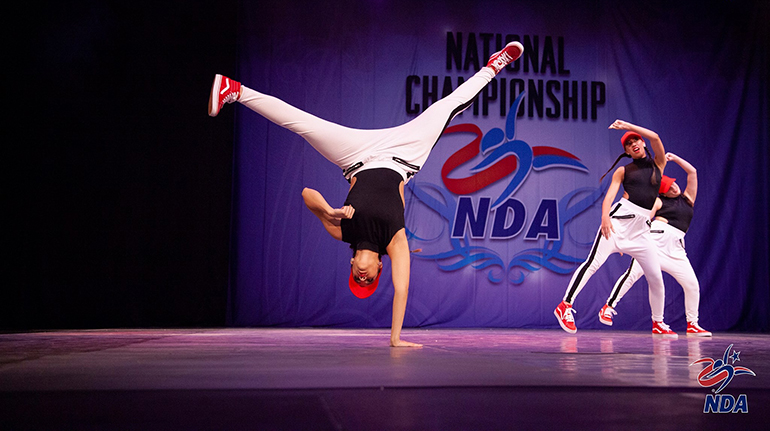 Archbishop McCarthy High School's Madison Rojas does a trick as Marcela Atehortua and Amber Romero move in the background during the Jazz competition at the National Dance Alliance's National Championship in Orlando in February.

MIAMI | Some teams win four consecutive state championships and treat their expertise as state secrets, to be guarded at all costs. St. Brendan cheerleading coach Arlenee Suarez saw an opportunity to build the sport among schools in the Archdiocese of Miami.

Many of those teams are led by coaches with ties to St. Brendan. Immaculata-La Salle coach Coral Buxeda is a St. Brendan alum. Msgr. Pace coach Surella Rodriguez cheered with St. Brendan assistant coach Cecilia Espinosa when both were at Florida International University and met Suarez when Pace and St. Brendan competed in a dual match. She said that cheerleading has grown because of the recognition the cheerleaders get.

Suarez also said athletic directors at the schools are pushing the sport more, but the camaraderie helps each team. “We support each other,” Suarez said. “We try to watch each other and cheer. The programs benefit, and the girls also benefit. They make new friends. The camaraderie makes me happy.” 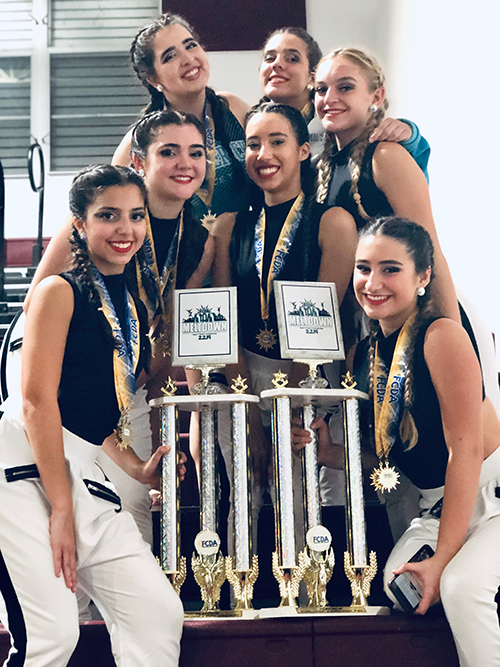 The teams also competed in a couple of head-to-head routines. Her cheerleaders received and gave feedback. “I look at it as the girls see me every day, and they think I’m picking on them and telling them things,” Buxeda said. “It comes off differently when someone with a different eye says the same thing. It opens our eyes.

“Receiving feedback is the best thing. There’s only one of me, and I’m looking at the same routine every day.”

Msgr. Pace’s second-place finish occurred when Rodriguez’s cheerleading experience met a great group of cheerleaders willing to put in the training. She came to Pace after coaching eight years in public schools. Rodriguez called them great all-around athletes who also had great grades, many of them getting into colleges like Florida State University and the University of Florida.

The team had 12 seniors, six juniors, four sophomores and two freshmen. She said those seniors had either never cheered before or had cheered in programs that aren’t as elite. But what they lacked in skill, they made up for in effort. “We had a lot of leaders from previous years,” Rodriguez said. “They knew they wanted to come back to state and go to the finals.”

Knowledge of the sport has helped her build a top state competitor. “The industry is more technical,” Rodriguez said. “You have to attack what they want. The growth of it is the passion. I live, eat and breathe cheerleading, as do other coaches. It’s nonstop, starting in May and ending the following May.”

Msgr. Pace increased its difficulty and posted its highest score in school history. That came after a 2018 year where the Spartans laid out a deduction-riddled routine. Improving over that finish drove the team this year. “This year was a redemption year for us,” Rodriguez said. “We wanted to show the judges and the state that we are better than what we showed in 2018, and it showed at regionals and state.”

She said two cheerleaders who are in all-star programs – senior base Emily Rodriguez and freshman backspot/tumbler Ivana Major – guided the team because of their experience. The Royal Lions surprised Buxeda when they finished second at regionals, which sent them straight to the FHSAA finals. The team had competed in smaller local competitions but competing at UF’s Exactech Arena was a shocker.

“Leading up to finals, the week of competition we had a good week of practice,” Buxeda said. “We had good run-throughs. In the finals, they did extremely well. They could’ve done better, but I was super happy with what we put on the floor.”

Buxeda is talking with coaches from as far away as Jupiter trying to plan camps to start skill-building in the summer. “I’m focusing on this year being the year we can start not at zero and get the help we can, especially with stunting,” she said. “(Next year), if it’s top 5, we’ll be happy. If we place top 2, I’ll throw a party.” 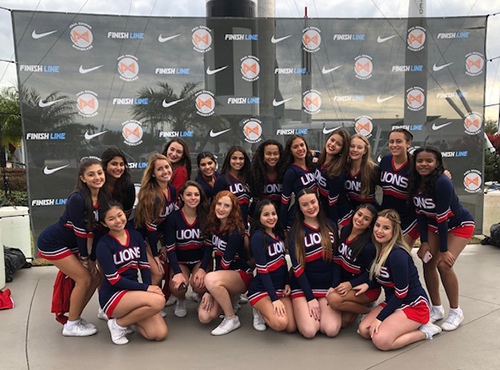 Chaminade-Madonna coach Brandee Moore said 10 seniors helped the team score 77.60 in the the Class 1A Large Non-Tumbling semifinals, which gave the team second place. However, only the top team in the semifinals advanced to the finals.

Chaminade-Madonna coach Brandee Moore said 10 seniors helped the team score 77.60 in the large division non-tumbling semifinals, which gave the team second place. However, only the top team in the semifinals advanced to the finals.

Moore’s in her first year coaching the Lions. She said many of them hadn’t been to competition before. Nerves may have affected their performance.

“They had experience in some stunting,” she said. “We’ll try to get them into camp this summer to help them.”

Cheerleading touches several parts of a school. Cheering at football and basketball games is a given. Rodriguez said that Pace’s cheerleaders would also appear at the school’s community events to boost its profile. That’s in addition to 3-4 hours of practice each day and keeping up with their studies at schools known for their academics.

All those activities give cheerleaders a master class in time management. St. Brendan cheerleader Meagan Nasco, who graduated this May, said that she worked at 5 a.m. on her studies, then did homework after practice.

The teams also learned how to give feedback when the squads rehearse together. Nasco called it an opportunity to learn sportsmanship but also to draw energy from a larger crowd. Rodriguez called receiving feedback from St. Brendan’s squad “like Christmas in learning.”

St. Brendan cheerleader Melanie Regueyra, also a 2019 graduate, said that Immaculata-La Salle and Pace would practice with St. Brendan quite a bit. “We know the coaches,” she said. “The girls all hang out together. I know all the La Salle girls and some of the Pace girls. We’d practice before states with La Salle, and we did a sendoff. If one squad was on the floor, the others would cheer.”

Rodriguez credited Suarez with helping her build Pace into a state competitor. “She didn’t have to lend her hand, but she did,” Rodriguez said. “I’m proud to get along with La Salle and St. Brendan. The camaraderie we’re building is something we want to keep for the future.”

Buxeda agreed that the collaborative nature of the teams teaches teamwork, and everyone benefits.

“The best thing you can do is have a close relation with coaches in other programs,” Buxeda said. “A helping hand is always a phone call (away). At drop of hat, I can call Arlenee and other coaches.”