Cheering for a four-peat 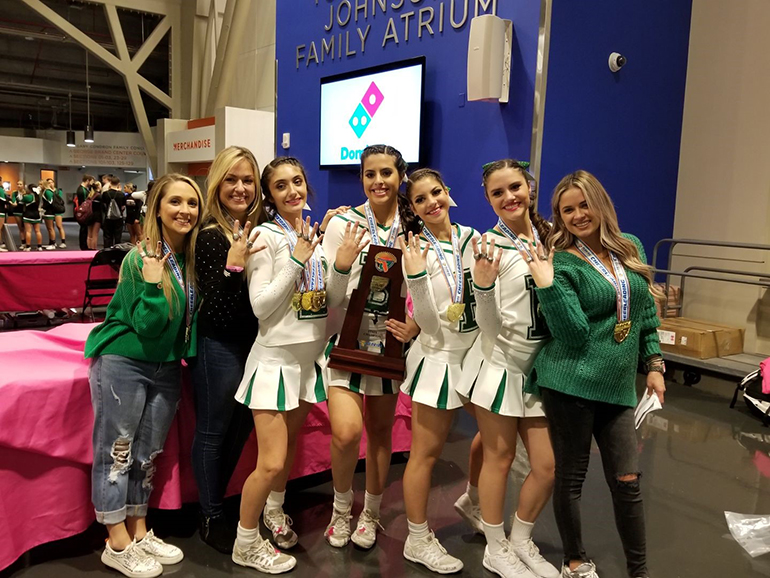 MIAMI | Four years ago, St. Brendan’s Original Four made a promise to win four state championships. In January, they kept that promise.

For coach Arlenee Suarez, building St. Brendan cheerleading has been a nearly life-long enterprise. She attended St. Brendan as a freshman and sophomore before transferring to Archbishop Carroll High as a junior and graduating in 2002. As soon as she graduated, her first job out of high school was coaching St. Brendan.

Suarez said that cheerleading teams choose their athletes in the same way as baseball teams — they need to cover certain positions. Instead of pitchers, catchers, infielders and outfielders, they need flyers, bases and tumblers. Bases serve as the foundation of formations, while flyers are the ones who top the formations. At St. Brendan, every girl tumbles, and they have to stunt well (building pyramid-like formations).

That’s because the FHSAA scores routines the same way as gymnastics or figure skating. They value certain skills higher than others.

“The more tumbling, the higher the score. They have to stunt well,” Suarez said. “It’s hard for us, because the archdiocese middle schools are not allowed to stunt and tumble. You have to build from scratch unless they come from an all-star program.”

Many students who have all-star experience go straight to the varsity, while those without tumbling experience start on the JV team to learn those skills. This year’s team had a mix of all-star and home-grown athletes.

Suarez said that teams have benefited by the FHSAA and Universal Cheerleaders Association becoming more transparent on judging criteria. FHSAA scores skills on super-elite, advanced, intermediate and beginner levels. St. Brendan tries to keep all its skills on the super-elite level.

The FHSAA scores on a 100-point scale, giving 65 percent on the musical section and 35 percent on the cheer side. Squads cram a lot of activity into a 2-minute, 30-second routine — crowd motivating, signs, pompons, getting a crowd to follow signs and choreography. “You need to be perfect. The amount of pressure on them is a lot,” Suarez said. “We don’t have four quarters. No one is sitting on a bench; all 30 of them are going at once. They have to make magic happen in those 2 minutes, 30 seconds.”

She also credits UCA camps with giving her a chance to collaborate with instructors who work with the FHSAA and UCA. The work has shown in the Sabres’ results — from fifth-place semifinal finishes in 2010 and 2011 to second in 2013 and 2014.

“I remember it’s called a full-round,” Pedrouzo said, talking about a spinning entry into an extended stunt. “We’d be sweating over a full round. We were super nervous. Now, ever since four years, our skill has improved. We told ourselves, ‘Let’s get better.’ Now we’re working on a double-up — a two-spinning skill. It gets better every year.”

Pedrouzo said it was actually St. Brendan’s principal who challenged the team to win four in row. “We’re like, ‘whoa, that’s a lot,’” Pedrouzo said. “We can do that with a lot of hard work.”

Regueyra said that Original Four bonded as freshmen. She’d known Caballero since their days cheerleading with the Encore travel team.

“We were the underdogs, and we were scared of the upperclassmen,” Regueyra said. “They were so big and had a great love of cheerleading. We were the only four (freshmen).”

For Suarez, it was competition among friends. She coached several of the Doral ladies during her time as program director at Step Ahead All-Stars cheer. She and the Doral coach led teams at the all-star level.

“We’re also so close to each other. They’re only 10 minutes away,” Suarez said. “It’s been a crazy rivalry. Their goal is to beat us, when our goal is to do our best and give our best shot. They’re not the only team in our division; there were eight very good teams. The girls know each other.”

The competition is not only with other schools. Caballero said that St. Brendan’s skill level has gotten better, bringing better cheerleaders. “It gets harder to make the team, because we have better people trying out for the team.”

Caballero said this year’s championship was the most challenging, because the team fought through a lot of injuries. While the Sabres had all the skills, determination and attitude brought the team its fourth title.

“We have a lot of pressure, being the first people to win states every year,” Caballero said.

Nasco credited the dedication. “A lot of practice is what helped us to win our state titles and maintain our name.”

This year the Sabres also improved on their national finish, taking fifth at the UCA nationals. That meet featured 949 teams, all at elite level. St. Brendan faced 27 other teams in its division. They set a goal to make top 5.

“When we did make the final round, the girls were ecstatic,” Suarez said. “It became real that they’d be able to do well at this competition.”

This year’s team had eight seniors who were strong at stunting and serving as bases for formations. The leadership for a potential five-peat will pass to 12 juniors.

“They’re hungry,” Suarez said. “That’s the difference between this team and other teams. We hope to have a top 3 finish (at nationals) next year.”