Discalced Carmelite Monastery: Almost there, but not yet

Nuns leave cloister for benefit concerts, to raise funds for their Homestead home 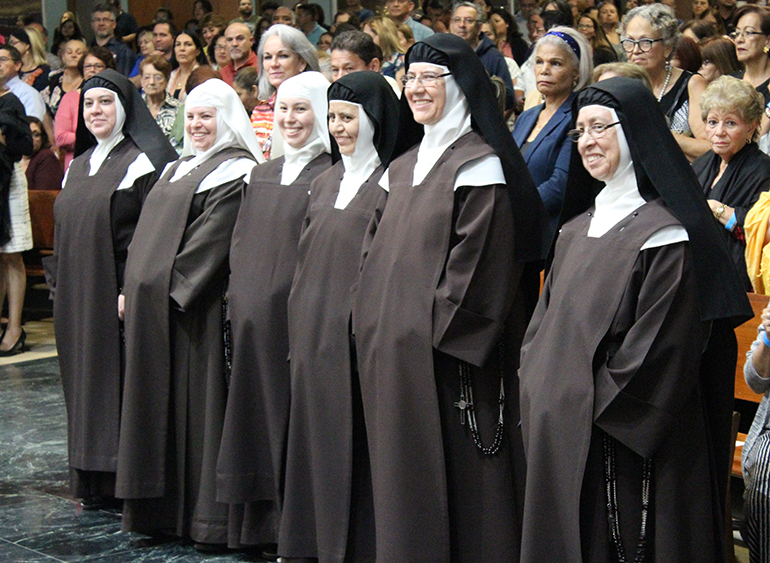 The Discalced Carmelite nuns and novices are all smiles as they are recognized at the contemplative benefit concert held at Immaculate Conception Church in Hialeah Nov. 6 to raise funds for the remaining work of their Monastery of the Most Holy Trinity in Homestead.

HIALEAH | The Discalced Carmelite nuns pray for everyone: believers and non-believers, Catholics and non-Catholics. Now they’re looking for prayers themselves — along with some money — so they can finish building their Monastery of the Most Holy Trinity in Homestead, which has been under construction since 2014.

The cloistered Carmelites have lived in South Florida since 2001, much of that time in the convent on the grounds of Immaculate Conception Church in Hialeah. With Archbishop Thomas Wenski’s permission, a few come out of the cloister on weekends to sell their homemade religious artifacts, candied nuts and granola at various parishes. 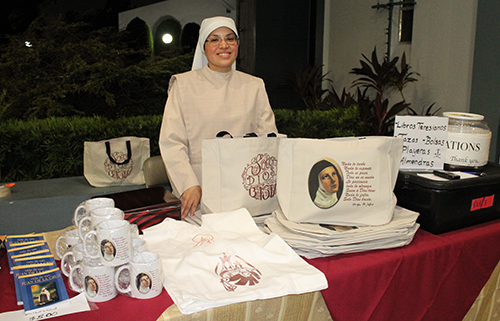 Discalced Carmelite postulant Tita del Niño Jesus sells merchandise, including the homemade candied nuts made by the nuns, at the contemplative concert at Immaculate Conception Church in Hialeah Nov. 6 benefiting the Discalced Carmelites and the completion of their Monastery of the Most Holy Trinity in Homestead. 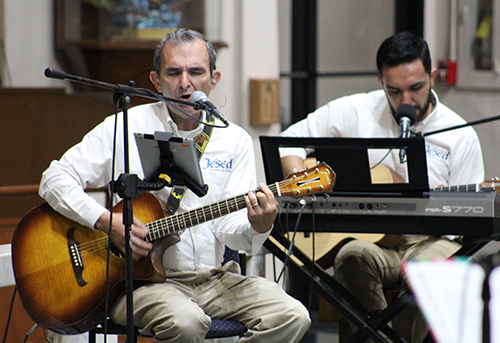 Music ministry group Jésed founder Federico Carranza and his son, also Federico, perform at the contemplative benefit concert for the Discalced Carmelites, who are fundraising for the completion of their Monastery of the Most Holy Trinity in Homestead. Jésed, based out of Mexico, are friends of the Carmelites from the time the nuns lived in Mexico. 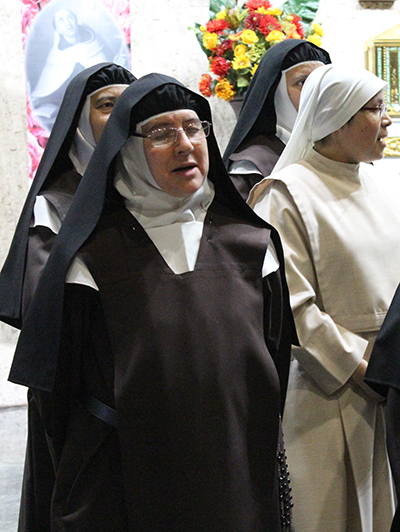 Accompanied by other Discalced Carmelites, Mother Maria Alba Mery de Jesus closes her eyes during a moment of deep prayer and song at the contemplative benefit concert held at Immaculate Conception Church in Hialeah Nov. 6 to raise funds for the remaining work of their Monastery of the Most Holy Trinity in Homestead.

“Going out to the parishes is not only about fundraising but friend-raising. More people are aware of their presence in the archdiocese and of their unique charisms,” Archbishop Wenski said.

At one point, when funds for the construction project ran short, the archdiocese stepped in with a generous donation to complete the roof of the new monastery. The Discalced Carmelites say they have felt such graces throughout the construction process.

“This is a grandiose work of our Lord. We want to thank all archdiocesan churches and their parishioners for giving so generously, and for the pastors that have repeatedly opened their doors and communities to the Carmelites. They have really taken us in as their sisters and as their own,” said Mother Maricela de Jesus Maria, the community’s superior.

On Nov. 6 and 7, the nuns also hosted two benefit concerts, one at Immaculate Conception and the other at Corpus Christi Church in Miami. The concerts were contemplative, with the Blessed Sacrament exposed for adoration. The performers were  Jésed, a musical ministry group from Mexico whose members are also good friends of the Carmelites.

In January 2001, when the relics of St. Teresa of Avila toured Mexico, Jésed followed, performing their music and staying in host parishes, convents, and communities along the way. Querétaro, a city in Mexico, was one of the stops. It is also home to the monastery that housed the Discalced Carmelites who now live in South Florida.

In October 2001, eight of them arrived in Miami at the request of Archbishop Emeritus John C. Favalora, becoming the first contemplative community in the archdiocese.

“And here we are, united 18 years later,” said Federico Carranza, the leader of Jésed, which consists of 45 musicians who split up depending on availability to perform at several venues simultaneously. Four traveled from Mexico for the concert in South Florida, including Ofelia Garza, Sarai Anteu, Carranza and his father, also named Federico, who founded the group.

“We sing of all the saints,” Carranza said. “The Carmelites, the Franciscans, the Claretians, the Dominicans, and more. But the ones who are closest to our hearts and are a part of our identity are the Carmelites. We feel at home with the Carmelites. They bring a quiet and stillness for reflecting. You see (these nuns), and they are not worried. They say, ‘Yes, ten years later and we are still fundraising.’ They are confident in the Lord.”

That trust in the Lord is why the nuns have been patient.

“I think something is still missing that prevents us from finishing. We see it as that the Lord wants more people to be a part of this work,” said Mother Maricela.

Years ago, a wealthy benefactor offered them a house big enough to establish their monastery. Miami Auxiliary Bishop Agustin Roman advised them to decline, suggesting instead that they build their monastery with donations from the community, just as he built the National Shrine of Our Lady of Charity in Miami, known as La Ermita, with donations of pennies from the early Cuban exiles.

Mother Maricela indeed remembers one donation of cans filled with pennies. “There has been no donation too great or too small. The people of this community have truly built the monastery,” she said.

Once completed, the Homestead monastery will be able to house 24 nuns. Twelve now live in the Hialeah convent. Five women have joined the community since the Discalced Carmelites set roots in South Florida in 2001. They include natives of Colombia, Nicaragua, Cuba and Mexico, as well as an American born to Colombian parents. Other women have also expressed interest. Some are still too young to enter but in fact the present convent is at capacity. 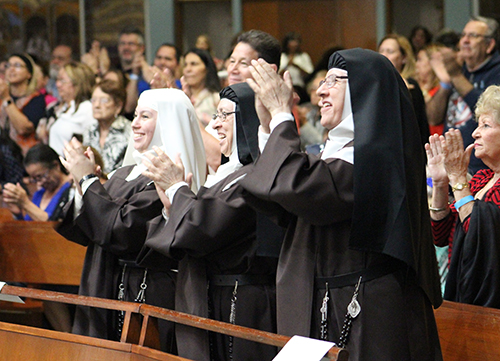 When the nuns applaud, you know it was great: From left: Discalced Carmelite novice Ashley Amalia Osorio, Mother Maricela de Jesus Maria, and Mother Mery Alba de Jesus applaud the music ministry group Jésed who performed at their contemplative benefit concert Nov. 6 at Immaculate Conception Church. The funds collected will go towards the completion of their Monastery of the Most Holy Trinity in Homestead.

“We cannot complain. The community of Querétaro is flourishing, and it appears that we are bringing the same grace from over there to here,” said Mother Maricela.

Many people don’t understand the cloistered life, or the nuns’ the desire to withdraw completely from the outside world for the rest of their lives. Jésed’s Carranza, the founder’s son, once asked a Discalced Carmelite nun what it felt like to live behind the bars.

“She said, ‘From where I am standing, you are the ones who are trapped behind bars,’” he recalled. “And that image became very clear to me in that we sometimes need to enclose ourselves with the Lord. They are the ones that bring that to us.”

Once their Monastery of the Most Holy Trinity is complete, the Discalced Carmelites will be ensconced in the quiet of the Redlands where, immersed in that oasis of silence and closeness to God, they will always pray for us.

HOW YOU CAN HELP