Be humble, learn from each other 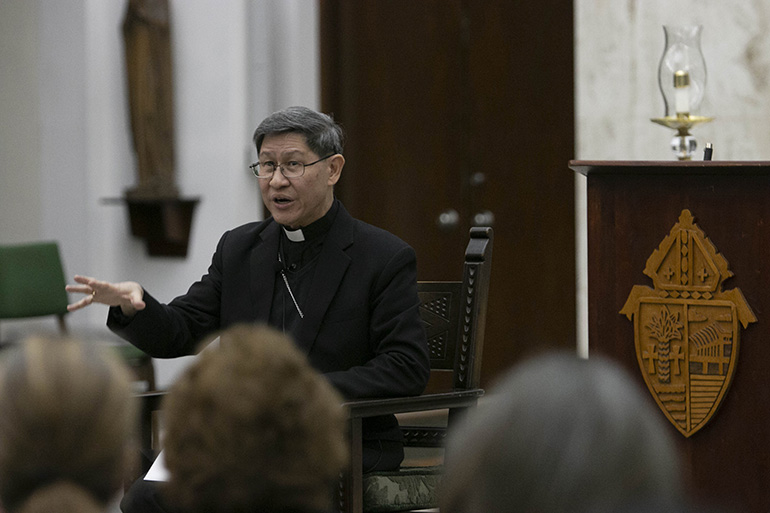 MIAMI | Cardinal Luis Antonio Tagle of Manila keeps his watch on Philippines time, because “sometimes I don’t know where I am,” he explained during a weekend visit to Miami March 22-24.

He had just flown in from Washington, D.C., after visiting Syria two weeks earlier. From here, he would be traveling to Vienna. He also had been in Rome at the end of February for the Vatican summit on sexual abuse.

The travel is part of his work as president, since 2015, of Caritas Internationalis, the network of Catholic charitable agencies charged with helping the poor in their home countries and responding to disasters worldwide. It’s also part of his work as cardinal, since his appointment by Pope Emeritus Benedict XVI in 2012.

The globetrotting has enabled him to confirm something he noticed in his own homeland, an archipelago of more than 7,000 islands, each with its own dialect and tradition, but all bound by a deep Catholic faith.

“That’s the beauty of the Christian faith. It can provide unity without imposing uniformity,” he said during an interview with the Florida Catholic shortly after his arrival. 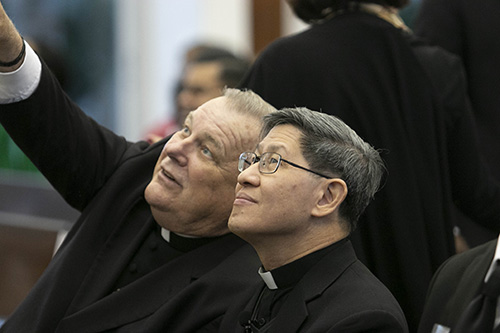 He had already confirmed South Florida’s diversity during a brief introduction to the staff and seminarians of St. John Vianney College Seminary, where he spent the weekend at the invitation of its rector, fellow Filipino Father Ferdinand Santos. The two have known each other for many years.

Just looking at the seminarians and hearing their family names, Cardinal Tagle said, he had been “inspired by the intercultural reality of Miami, which is, I think, the reality in the U.S.”

This marked his third time in Miami, he noted, though this was the longest he had stayed. His visit helped the seminary — the only freestanding, bilingual, college seminary in the U.S. — celebrate its 60th anniversary. In addition to delivering the 19th annual Fides et Ratio (Faith and Reason) lecture Friday evening, Cardinal Tagle was the guest of honor at a fundraising banquet for the seminary Saturday night and celebrated Mass with Miami’s Filipino community Sunday morning.

Asked about topics ranging from the drop-off in faith and practice among millennial Catholics to the clergy sex abuse crisis worldwide to the person of Pope Francis, the cardinal’s answers could be summed up this way: If we are humble, we can learn from each other.

It is not fair to generalize, the cardinal said in response to a question about millennials. “In some parts of the world you see them vibrant.” 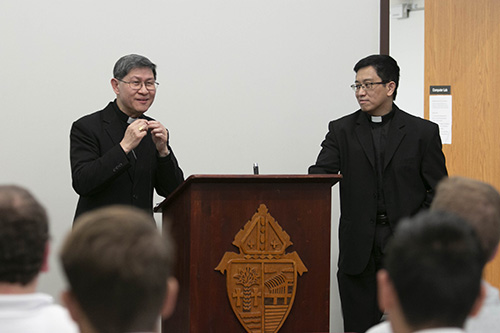 Father Ferdinand Santos, right, rector of St. John Vianney College Seminary in Miami, accompanies Cardinal Luis Antonio Tagle of Manila during a brief meeting with seminarians and staff the afternoon of March 22. The two have known each other for a number of years.

In other places, however, their apparent lack of faith — and definite lack of practice — are matters of concern, not only for the Church but for their parents and teachers. The experience in Europe and North America may serve as a forewarning to other parts of the world, such as the Philippines.

“We can make use of that to become better pastors and better parents and better educators,” Cardinal Tagle suggested. Do not prejudge the younger generations as hostile to the faith. Begin a dialogue. Ask them what they expect from the Church that they are not getting. And listen to their answers.

“If we listen to them they might guide us to the paths of renewal,” he said. “Maybe they have something to tell us and if we are humble enough we might learn from them and become a better Church.”

The same applies to the clergy sexual abuse crisis. The perception 20 or 25 years ago, in other parts of the world, may have been that it was a uniquely American problem, but that has changed, Cardinal Tagle said. What the American Church now must recognize is that even if it’s not spoken of in other countries “in the American way, it doesn’t mean that they’re not facing it. The cultural differences must be factored in.” 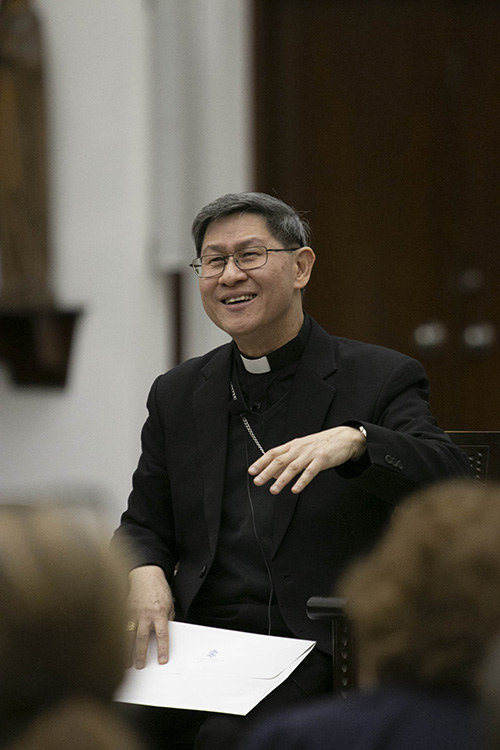 The Church can and should give general guidelines for reporting and punishing abuse on the part of the clergy, and those protocols must include respect and cooperation with civil authorities, the cardinal said. But in issuing those protocols, the Vatican also must consider the different legal systems in various countries, the hostility toward the Church in some, and the corruption of civil authorities in others. “That’s the tricky part,” he said.

He noted that his experience as a cardinal — who in addition to remaining bishops in their local churches are tasked with duties for the global Church — has helped him expand his horizons.

“I see that part of my ministry is to also try to understand the complex contexts of questions,” he said. He cited as an example his view of Christian-Muslim relations, which was “quite limited to our experience in the Philippines.” He has since learned that “the global reality is not as simple as I used to think.”

Since his role as cardinal is to give the pope a balanced, global view of an issue, “I will demand of myself a lot of consultation with people from different contexts,” he said. “This is a globalized world,” and something that occurs in one part of the world “is never simply a local thing. It will have ramifications.”

Asked about Catholics’ differing perspectives on Pope Francis, Cardinal Tagle noted that the pope is the product of his unique background: Latin American, Argentine, with an immigrant background and a Jesuit formation, “with all its strengths and limitations,” as well as his own personal background and his experiences as a pastor. “We cannot avoid that,” he said.

The fact that this pope started off his pontificate by greeting people in a very ordinary way — “Buona sera” — pleased some and disturbed others. “Why is he not conducting himself as pope?” they wondered. But he spoke to a woman who said it “warmed her heart” when she saw Pope Francis touch a statue of Mary when he prayed before it. That told her, “the pope is just like us.”

Cardinal Tagle also had a message for his fellow Filipinos, so many of whom have left their homeland to work around the world. He noticed when the pope celebrated Mass in the United Arab Emirates in January, for example, that 40 percent of those in attendance were Filipino migrant workers.

“Churches are in a way benefiting from the witness of the Filipinos,” he said, and their strong example of faith. “We should not forget our faith and share that faith.”

Despite their limitations, this is one of our precious gifts to the Church where we are,” Cardinal Tagle said. “Maybe the Lord sent them here also for a mission: to bring whatever gifts they have to the Church in Miami.” 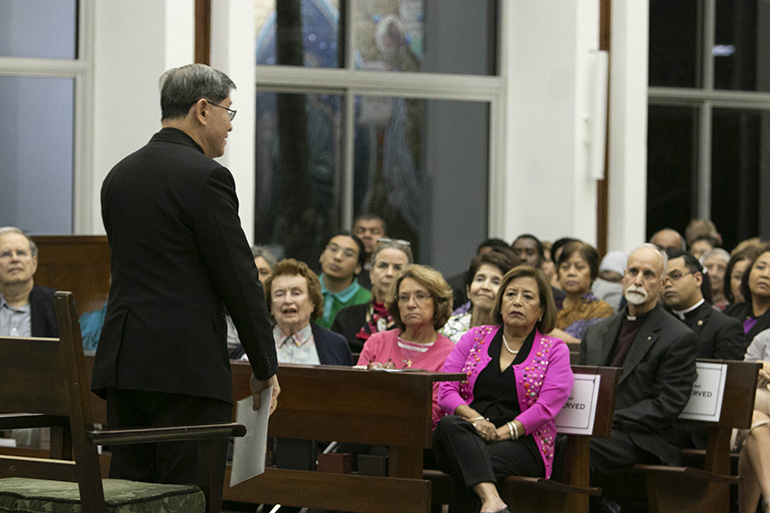