Filipino prelate also asks priests, lay people to examine ‘to whom do we belong?’

MIAMI | The formal title of Cardinal Luis Antonio Tagle’s Fides et Ratio lecture, given to seminarians, priests and others at St. John Vianney College Seminary March 22, was “Shepherding God’s People in a Time of Challenge, Crisis and Change.” 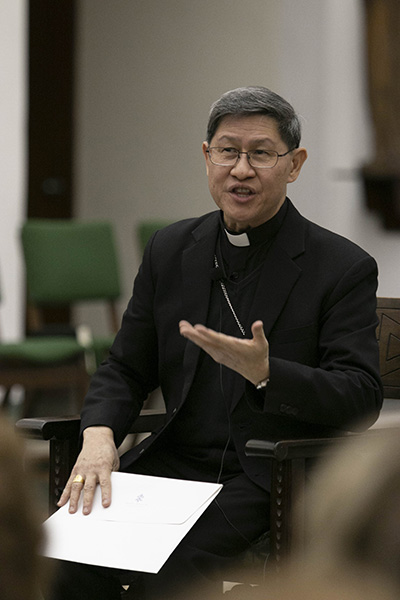 In an interview prior to the lecture, he summarized his message this way: Don’t expect a comfortable life. Be prepared to “suffer the cross.”

“Every life, especially that of a pastor, will be full of crosses. That’s the Jesus that we are following. If you start looking for a life without crosses, you’re in for disappointment,” he told the Florida Catholic.

And he began his lecture that evening by asking, “When is not a time of challenge, crisis and change?” for the Church. Daily challenges and crises are present in the lives of every priest and lay person, he said. “Let us not panic. This is something very ordinary in human life and in the history of the Church.”

His formal reflection also examined the meaning of “shepherding” a flock in today’s mostly urban, non-agricultural, world, as well as the Judeo-Christian understanding of being “a servant.”

In the ancient world, being a servant meant being someone else’s property. In the Judeo-Christian understanding, servanthood came to be understood as covenant. A servant is not God’s property, nor does he merely “work” for God.

As Jesus showed by his example, God serves everyone, because God loves everyone. “If I belong to God, I will serve everyone, even my enemy,” the cardinal said.

Similarly, a shepherd will lead his flock to his master. But “what if God is not the master of the shepherd? To whom will he lead God’s people?” Cardinal Tagle asked, listing some of the temptations that can take the place of God as masters: honor, prestige, comfort, status.

“We need to make a serious examination of conscience,” he said, referring not just to priests but also to lay people, spouses and parents, who are tasked with shepherding their families. “Sometimes God is just an appendix to the many other masters to whom we belong.”