MIAMI | Archbishop Thomas Wenski will ordain three men — all millennials and all Hispanic — to the archdiocesan priesthood this Saturday, May 7, 2022, beginning at 10 a.m. at St. Mary Cathedral. Following are brief profiles of the soon-to-be new priests.

Two deaths brought Deacon Betancourt, 37, to the priesthood. The first was his grandmother’s in 1998. It made him ask himself the question, “Are we born merely to die?” The second was his mother’s in 2007. But by that time, his perspective had changed.

Born in Santo Domingo, Dominican Republic, the third of five children, Deacon Betancourt grew up in a Catholic household — Catholic to a point. They went to church, received the sacraments but did not move beyond that.

His grandmother’s death shocked him into asking deeper questions. “I saw her in the casket and felt impotent,” he recalled. 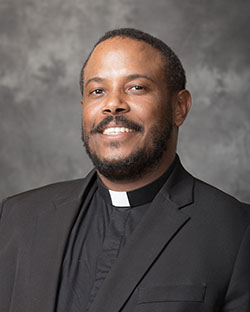 He found answers through some neighbors, a family who belonged to the Neocatechumenal Way, which St. John Paul II described as “an itinerary of Christian formation.” He saw that they lived their faith differently, more intensely.

“They spoke about Christ being risen, about death having been defeated, and that is sort of what consoled me,” Deacon Betancourt said. That led him to another question: “I wanted to know what my mission was.”

The first inkling that he might have a vocation to the priesthood came in 2000. Yet he rejected two invitations to enter the seminary, in 2000 and 2003. He liked girls, he liked to party, he liked to drink, and he loved his Yamaha motorcycle. Having earned a degree in electronics, he now was fixing elevators for a living.

In 2007, his mother died. “The same impact,” he recalled, “but it was another way of seeing the same event, that is, with Christ at the center and being close to the Church.”

Two years later, invited once more by his Neocatechumenal community to answer the call to priesthood, he again hesitated. But when the spiritual director of the Redemptoris Mater seminary in Santo Domingo invited him to an upcoming gathering, Deacon Betancourt was forced to choose. The gathering coincided with a work deadline. He chose the gathering, sent his brother to do the work, and promptly got fired.

Then he had to make another decision. Use some money he had saved to upgrade the motor on his Yamaha or pay off his debts and enter the seminary. “God won,” he said.

He soon found himself in Miami, as one of the first 12 seminarians at the Redemptoris Mater Archdiocesan Missionary Seminary, which opened in December 2011.

Redemptoris Mater seminarians attend classes at St. John Vianney College Seminary in Miami and St. Vincent de Paul Regional Seminary in Boynton Beach, but they live with other Neocatechumenal Way seminarians next door to St. Cecilia Church in Hialeah. They also spend three years at the midpoint of their formation doing “itinerant” or missionary work in other places. Deacon Betancourt worked in Washington, D.C., Virginia, Philadelphia, Delaware, Atlanta and the Carolinas.


DEACON AGUSTIN ESTRADA: FROM ANGUISH TO ‘ALL IN’

“Catholicism almost comes with the last name,” said Deacon Estrada, 30, a native Californian and the third of six siblings in a Mexican American family.

As youngsters, he and most of his siblings attended Catholic schools. They served at the altar. His father is an extraordinary minister of holy Communion and his mother is a lector. His parents have been involved in the Neocatechumenal Way since they were newlyweds, nearly 40 years.

Still, the priesthood “wasn’t something that I thought about as a child,” Deacon Estrada said. 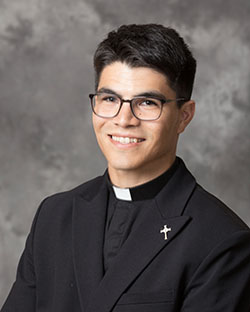 In high school, he focused on other things, namely water polo. He competed in the Junior Olympics and was looking toward playing at an NCAA Division 1 college. While studying, he also coached. That’s when his mother suggested he might have to reorganize his priorities because to compete at the highest level “you kind of have to sacrifice the rest of your life.”

His parents felt sadness, of course, but they never spoke of his brother’s death “in a tragic way. They spoke about it in faith,” he recalled. “To be able to see the presence of God in the cross, it took me a while to understand that, but it’s something that always stuck with me.”

Not just that. “I had turned my back on the faith, in the sense that I was looking for life in other things. In sports and friends and my future career, and the relationship that I was in,” he said. “I felt empty, despite the fact that I had everything.”

Not just that. “I had turned my back on the faith, in the sense that I was looking for life in other things. In sports and friends and my future career, and the relationship that I was in,” he said. “I felt empty, despite the fact that I had everything.”

He had plenty of time to tussle with that anguish at 20, when he traveled to Madrid, Spain, for World Youth Day 2011, with a subsequent stop in Lourdes, France.

That’s when he realized knowing about God is not enough. “To know God on a personal level is a whole different thing.” Until then, his faith had depended on the faith of his parents, on what others had taught him. “I had to come to know God face to face.”

The turning point came while praying at Lourdes, when he looked up at a mosaic of Jesus inscribed with the words, “Come to me all you who are burdened...”

“He was calling me back to him, but to have a one-on-one relationship with him,” Deacon Estrada said. “That’s when I started hearing the call.”

Within two months, he was in Miami, among the first 12 students at the Redemptoris Mater seminary. “The Lord knows that I’m either all in or all out, so I opened myself a little bit and the Lord said, ‘Let’s do this. Let’s do this now.’”

His three-year missionary experience allowed him to live a year in Israel: six months in Galilee serving pilgrims and six months in Jerusalem doing biblical studies. He then spent two years with an evangelization team commuting between Neocatechumenal Way communities in Oklahoma and south Texas.

Neither friends nor family ever expected he would become a priest, Deacon Estrada said, but God knows exactly what he’s doing. “This is a calling that comes from the Lord. It doesn't come from me or anybody else. The Lord doesn't make mistakes.”

Deacon Prendes, 29, describes his call to the priesthood as “like a journey,” with the Lord continually letting him know, “I want you at my side, serving.” 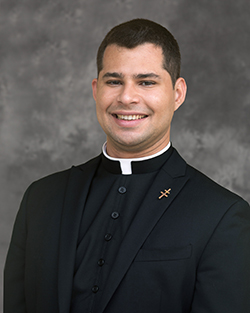 The journey started in his native Havana, at the church of Nuestra Señora de Regla, where he was baptized at the age of 12 at his mother’s insistence. An only child, he began serving at the altar every weekend, even while preparing for baptism. From then on, he was “always surrounded by good priests,” priests who, despite the difficulties of life in Cuba, served “with tremendous joy,” Deacon Prendes said. “I wanted to have that joy that they had.”

But before embarking on his seminary journey, he embarked, at 18, on a physical journey from Havana to Miami, where his father had been living for 20 years. He joined Good Shepherd Parish in Kendall and began serving at the altar again, while taking courses in English as a second language and helping in his father’s pressure cleaning business.

Two years later, he entered St. John Vianney, and continued his studies at St. Vincent de Paul. Then came the pastoral year, when archdiocesan seminarians get to experience life in a parish. Instead of returning to the seminary, he took the next year off. He felt he needed to keep discerning.

“It’s either forever or it’s not. I don’t like things halfway,” he said.

He found work at Publix and UPS, where his co-workers and others confirmed his vocation.

“People would ask me, ‘and what did you do before?’” Seminarian, he would tell them. If they had a problem, they would come to him. “That’s God’s kid,” they would say. He felt God was sending him a message: “These people need you. I need you for these people.”

Taking time off, he sees now, was necessary. “And I think it’s very healthy,” he said. “I went back and I feel very happy, confident that this is for me.”

Maria C. Doval - 05/08/2022 04:48 PM
I have enjoyed the information about our three new priests ordained yesterday. I feel blessed, I understand Father Enzo Prendes will be at St. Peter and Paul Church where I am a parishioner and lector. Happy to see we are blessed to have new priests with such good Experience with the Lord’s Call.

Carmen Antenucci - 05/08/2022 07:40 AM
I am blessed and privileged to have met Fr. Enzo Rosario at Little Flower Church in Hollywood Florida this past winter (2021). He welcomed me to the parish with a warm and friendly smile which captured me in knowing that he will have the love and trust from all of his parishioners. We chatted after mass and he took time to pray together with me for my special intentions. For this, I am forever grateful. I wish to congratulate Fr. Enzo, Fr. Agustin Fr. Cesar today on this most Blessed and Sacred Occasion of their Ordination. May God protect and be with them as they begin this new journey of ushering the people of God to the Kingdom of God.

Valli Leone - 05/05/2022 08:06 PM
Thanks so much for this wonderful article and the three personal videos on these precious young deacons — Cesar, Agustin and Enzo. I am so edified by their testimonies and have already begun praying for them, sensing that the Holy Spirit is about to do some very wonderful and explosive work through each and every one of them wherever they are assigned. Jesus never fails! All glory to you, Heavenly Fathrr, now and forever. âï¸âï¸ð