What is the Neocatechumenal Way?

A formation process aimed at rekindling the faith in nominal Catholics 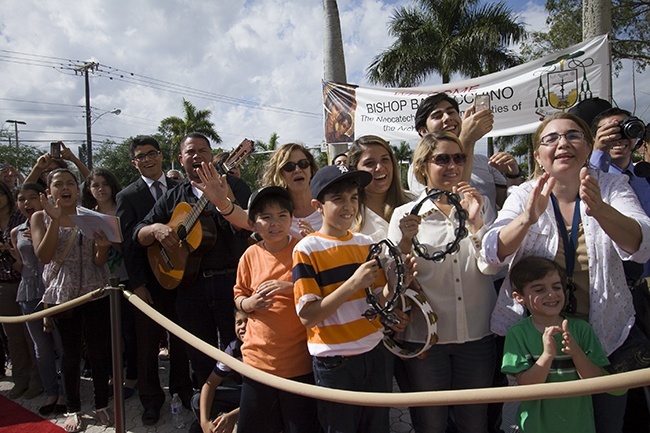 Members of the Neocatechumenal Way sang songs and hung banners in the plaza in front of the cathedral to welcome Bishop Peter Baldacchino to Miami. There are 30 Neocatechumenal communities in the archdiocese, active in eight parishes.

MIAMI | To most it is a mystery. To some it seems like a sect. It is not a movement, like Cursillo or the Charismatic Renewal. But it has the approval of popes dating back to Paul VI and including, just last month, Francis.
One thing is certain: the Neocatechumenal Way definitely moves people to a new life as Christians.
It is a series of steps â similar to the RCIA, or Rite of Christian Initiation of Adults but lasting much longer â aimed at rekindling the faith in people who have been baptized Catholics.
Miamiâs new auxiliary, Bishop Peter Baldacchino, is a product of the Neocatechumenate, which his family joined when he was 13 in his native Malta. He describes the Way as âsmall communities of rediscovering the faith.â
âOnce faith is rediscovered, fruits start to grow. We have seen many fruits,â he said.
Fast facts about the Neocatechumenal Way
His vocation is one of them. The growth of the Catholic Church in the Turks and Caicos, where he served for the past 15 years, is another. âWhere there was nothing, and where now, thanks be to God, there is something.â
Another âfruitâ of the Neocatechumenal Way is an abundance of vocations, because it is a process of formation that encompasses the whole family and attracts young people. 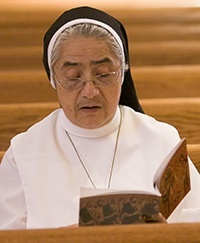 Sister Enith Montero of the Dominicans of the Immaculate Conception who work at St. Cecilia Church in Hialeah, looks over the ordination program.

That abundance of vocations resulted in the establishment of Redemptoris Mater seminaries, where men from different countries study together and are ordained for a particular diocese, but commit themselves to serving in whatever corner of the world they are most needed.
Bishop Baldacchino, a Malta native, is the first bishop in North America to come from a Redemptoris Mater seminary, and only the third such bishop worldwide. One of his classmates, an Italian from Salerno, is vicar general in Estonia. 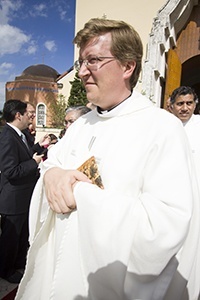 A Redemptoris Mater seminary opened in Miami in December 2011 and currently has 13 seminarians enrolled. One Redemptoris Mater priest already has been ordained for the Archdiocese of Miami, and another will be ordained this May.
The Neocatechumenal Way began in Spain in 1964. Two lay people â Kiko ArgÃ¼ello and Carmen Hernandez â developed it as a method of evangelizing the residents of one of Madridâs poorest slums. Pope John Paul II hailed the Neocatechumenate as âan itinerary of Christian formation valid for our society and for our time.â
âThe catechumenate always existed in the Church,â Bishop Baldacchino explained. âIt was the instrument the Church used to turn pagans into Christians. It isnât magic. It is a process that the Church always had.
âI think it was Paul VI who said that we are living in a time of a new form of paganism, a neo-paganism. And he saw paganism, catechumenate, Christianity; and therefore, neo-paganism, neo-catechumenate, new Christian.â
The Neocatechumenal Way fits perfectly with the need for the ânew evangelizationâ that Pope John Paul II described: Not so much bringing Christ to a world that never knew him, as helping nominally baptized Christians â or cultural Catholics â rediscover the fullness of the Christian faith, and live accordingly.
Sister Enith Montero, a Dominican of the Immaculate Conception who has worked at St. Cecilia Church in Hialeah for many years, said she, too, has seen the fruits of the Way.
The parish closed in 2009 for financial reasons, and re-opened in December 2011 with Father Emanuele De Nigris as pastor. Father De Nigris, a native of Italy, is the product of the Redemptoris Mater seminary in Washington, D.C., and serves as rector of the Redemptoris Mater seminary in Miami, which is based at St. Cecilia.
âIt has been transformed,â Sister Montero said of the parish. âFrom the ashes, now it has life in abundance, a community that is very much alive and committed.â
Itâs not comparable to what it was before, she stressed, because the community also was âvery active, had many (spiritual) groups,â when she served as director of religious education. âIt simply is different.â
Her co-worker, Sister Maria Teresa Flores, put it this way: âThere are new people and above all young people, young people who hunger for God.â
âThese two new priests have raised the community from the ashes,â Sister Montero said. âItâs a new Pentecost.â 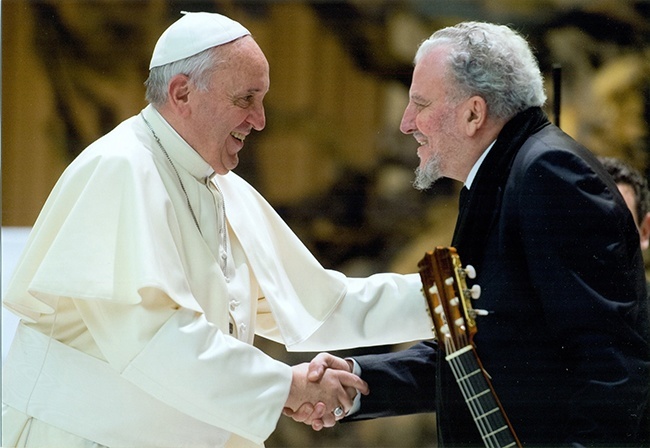 Pope Francis meets with Kiko Arguello, co-founder of the Neocatechumenal Way, during a meeting with more than 10,000 members of the group in the Vatican this past February.

Elaine Fowler-Ray - 03/27/2014 03:52 PM
Congratulations Most Rev. Peter Baldacchino from Catholic Volunteers in Florida (CVIF)! We are thrilled you are a part of our Florida family. (On a side note- My parents are very involved in the Neocatechumenal Way in Philadelphia, PA. I have forwarded them this article. We have spent many a Christmas as host family to the amazing and wonderful seminarians!)
Blessing to you in your new role. Elaine Fowler-Ray, executive director of CVIF

Louis Borg - 03/26/2014 12:43 PM
I and my wife Mary together with our five children wish to congratulate Bishop Peter Baldacchino for his election as a Bishop of Miami. We also belong to the Second Community of the parish church of Conception Hamrun. I must say that the Neocathecumenal Way has done miracles to our marriage and especially to show respect and unconditional love to one and all. "father Peter" belongs to the first community of our parish. Whenever he is in Malta and celebrates mass at the community, he always succeeds in uplifting my spirit and makes me more willing to dedicate my life to others beginning at the family.I praise God for his abundance of love especially by giving me such a wonderful wife and family and brethren whom I can really rely on.
We send our prayers and best regards to Bishop Peter, the clergy and community of Miami. Greetings from Malta.
Louis and Mary Borg.