6 Churches to be indulgence sites for Year of Mercy

All will open their Holy Doors on Sunday, Dec. 13 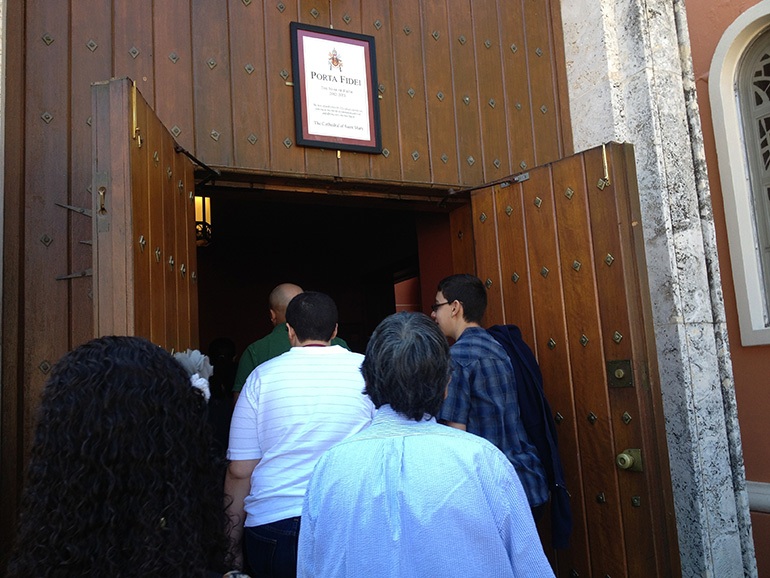 People enter St. Mary Cathedral's Holy Door during the Year of Faith in 2013. That same door will soon be re-opened for the Year of Mercy.

MIAMI | To mark the start of the Jubilee Year of Mercy, churches around the world â including six in the Archdiocese of Miami â will be opening a Holy Door on the third Sunday of Advent â five days after the Dec. 8 opening of the Holy Door in Rome by Pope Francis.

A Holy door symbolizes a passage or transition into a special year of evangelization and prayer. The Holy Door is opened to evoke the concept of forgiveness, which is the main focus of a Holy Year, and in this case mercy, the focus of this extraordinary jubilee.

During the Jubilee Year of Mercy, Pope Francis is granting indulgences to people who visit any of the four papal basilicas in Rome, the cathedral where they live, or any of the shrines or churches designated by their diocesan bishop.

Indulgences also are granted to anyone who performs “one or more” of the traditional works of mercy, such as visiting the sick, feeding the hungry or sheltering the homeless. These actions must be accompanied by participation in the sacrament of reconciliation and the Eucharist, a profession of faith and prayers for the pope and his intentions.

Those who are in prison, ill or elderly can obtain the indulgence by attending Mass or praying wherever they can, for the love of the Father “excludes no one.” For more information go to www.im.va.