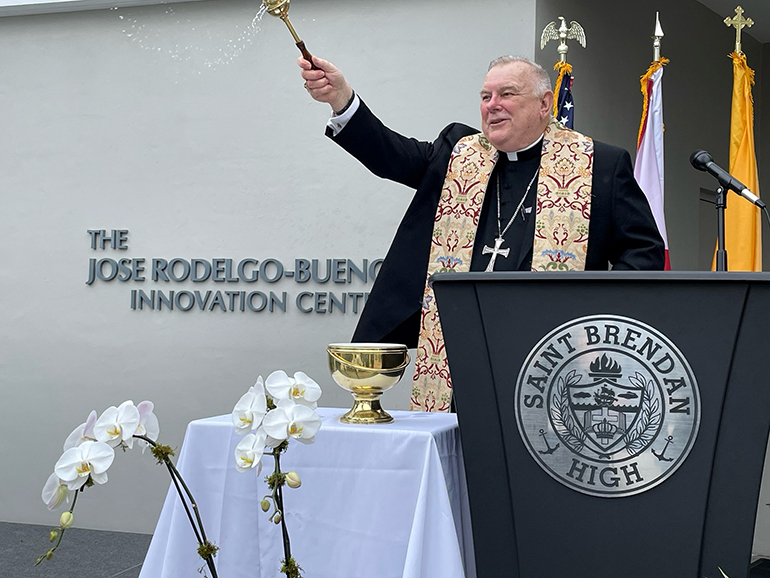 Archbishop Thomas Wenski blesses the renamed Jose Rodelgo-Bueno Innovation Center at St. Brendan High School, Jan. 12, 2022. Rodelgo-Bueno, who served as principal from 2012 to 2020, was pivotal to the construction of the state-of-the-art building. 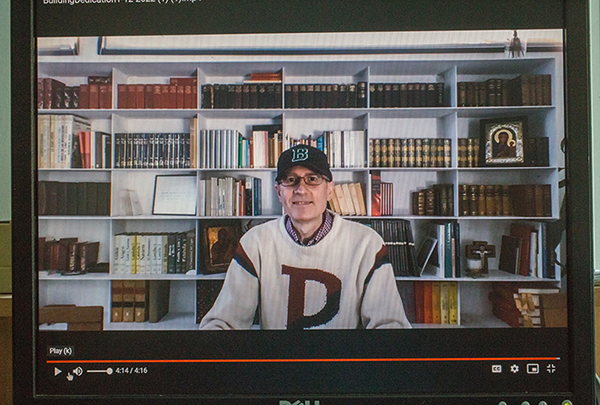 Jose Rodelgo-Bueno addresses students and staff from his home in Madrid, Spain, during the renaming of St. Brendan High School's Innovation Center in his honor, Jan. 12, 2022. Rodelgo-Bueno served as principal from 2012 to 2020 and was pivotal to the construction of the state-of-the-art building.

MIAMI | The incredible impact and insurmountable contributions of a beloved teacher and previous principal, Jose Rodelgo-Bueno, moved St. Brendan High School board members to rename the school’s Innovation Center in his honor.

“We are here to honor ‘Pepe,’ who, led by Christ, accomplished so much for our school, and left an indelible mark on our community,” said St. Brendan’s interim principal, Ivette Alvarez, during a dedication ceremony Jan. 12, 2022, renaming the structure which opened in September 2016.

Rodelgo-Bueno was not physically present at the dedication but sent a video thanking all those who had chosen to rename the building in his honor. He left the school in March 2020 and returned to his home in Madrid, Spain, because of serious illness.

“His unwavering faith, military work ethic, passion for learning, clear vision, and mission, transformed the school,” said Alvarez. “Not just the physical plant, which is evident in this state-of-the-art building, but also in something far more important, our lives. Pepe wanted us to continue to build in Christ a school and a community that would change the world for the better.” 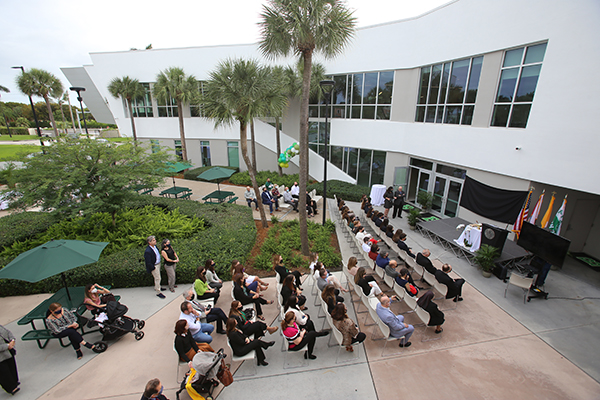 Rodelgo-Bueno addressed those at the ceremony wearing a baseball cap with the letter B on it — for St. Brendan High School — and a pull-over sweater with a large P on the front signifying Pepe, the Spanish nickname for Jose and the name everyone calls him. “Pepe” also is the Spanish pronunciation of the abbreviation “PP,” Latin for “Pater Putativus,” meaning father who is not the real father. It’s how St. Joseph was referenced in old manuscripts.

“He was not the real father of Jesus but he was a real father to Him,” Rodelgo-Bueno wrote in his book, “Green and White: My School, My Life,” several copies of which were available at the dedication. Green and white are the colors of St. Brendan High. The book was published in 2021. 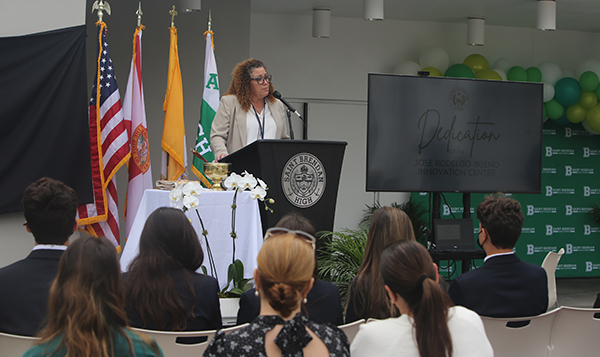 St. Brendan's interim principal, Ivette Alvarez, addresses students and staff during the renaming of St. Brendan High School's Innovation Center in honor of Jose Rodelgo-Bueno, who served as principal from 2012 to 2020 and was pivotal to the construction of the state-of-the-art building. The rededication took place Jan. 12, 2022.

“I am not the real father of my students, but God knows I have been trying very hard to be a good father to them,” he wrote. “I owe everything to God and to his father in faith, Msgr. Luigi Giussani, founder of the Communion and Liberation movement.”

He called the innovation center an architectural masterpiece at the 1,200-student high school.

In 1975, buildings on the south side of St. John Vianney College Seminary became St. Brendan High School. Until the Innovation Center was built, the high school was hidden between the seminary to the north and Christopher Columbus High School to the south. The Innovation Center has made St. Brendan High School stand out. The forward-looking cantilever structure was the first new building at the school since it opened.

“Christ is present in this building, and he tells us YOU are a gift from God,” Rodelgo-Bueno said in the video, pointing his finger at the audience. “This building reminds us of the ship of St. Brendan, the Irish navigator, our school’s patron. Nothing about this building is conventional. It invites students to think outside the box.”

He concluded his video address by saying, “Go Sabres!” a reference to the school’s mascot. It derives from the extinct saber-toothed tiger and is a combination of the first letters of saint and Brendan. 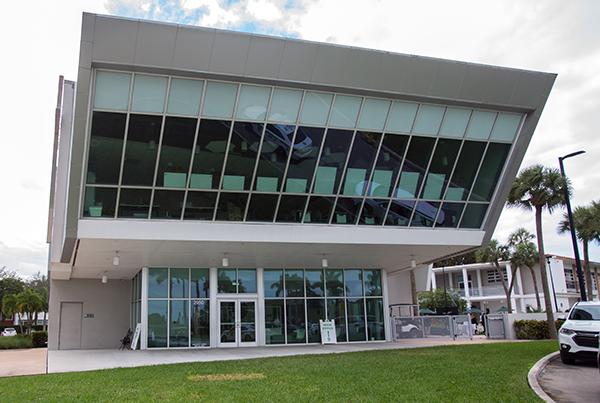 View of the forward-looking and newly renamed Jose Rodelgo-Bueno Innovation Center at St. Brendan High School, which Archbishop Thomas Wenski rededicated Jan. 12, 2022. Rodelgo-Bueno, who served as principal from 2012 to 2020, was pivotal to the construction of the state-of-the-art building.

The former principal’s credentials are extensive. Rodelgo-Bueno studied aeronautic science and graduated from the Spanish Air Force Academy, number one in his class. He earned a bachelor’s degree in economics and a doctorate in business administration at the state university in Madrid with specialization in education.

Moving to Miami in 2006, he joined the Office of Catholic Schools as executive director for inner-city schools and earned a post doctorate in educational leadership from Florida International University. He became principal of St. Brendan in August 2012, the same year he published his second book, “The Teachers Will Save U.S.”

The archdiocese’s 62 Catholic schools will be celebrating Catholic Schools Week from Jan. 30-Feb. 5, 2022. Each school has planned a variety of spiritual and social activities to celebrate the vibrancy of Catholic education. This week is also the start of registration season for Catholic elementary schools. Anyone interested in a Catholic education, should start by visiting the School Finder on the archdiocesan website: https://www.miamiarch.org/CatholicDiocese.php?op=school_location.

Hope Sadowski - 01/19/2022 01:20 PM
Pepe, what can I say about this extraordinary and determined man. I had the privilege of working with Pepe at the Office of Catholic Schools. His dream was always to be a principal at a high school. He perfected his English and went on to get the necessary certification to accomplished his dream. I also can call him my friend. May the Lord always walk with him and protect him. We miss you Pepe. God bless