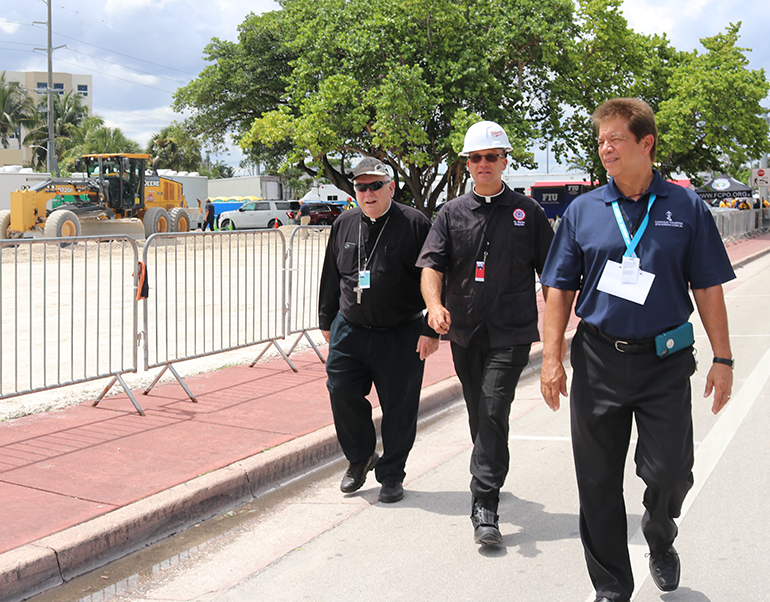 Archbishop Thomas Wenski walks with Peter Routsis-Arroyo, executive director of Catholic Charities (right), and Father Christopher Marino (center), rector of St. Mary Cathedral who also is chaplain for the City of Miami Fire Rescue, they were at ground zero of the Champlain Towers South collapse July 2, 2021. Routsis-Arroyo said Catholic Charities would be helping residents for the long term.

“Because no disaster is the same,” said the CEO of Miami’s Catholic Charities, who has witnessed the destruction wreaked by hurricanes Katrina, Sandy, Maria and Hugo as well as the earthquake in Haiti — and now the condominium collapse in Surfside.

All were different in terms of the area impacted and the number of people killed or left homeless. The disaster in Surfside was confined to a single building in a one block area but has made headlines around the world.

“All eyes and ears are focused specifically right here,” at least until some other disaster makes the news, Routsis-Arroyo noted July 2, nine days after the collapse of Champlain Towers South. “Everybody wants to see how they can help.” 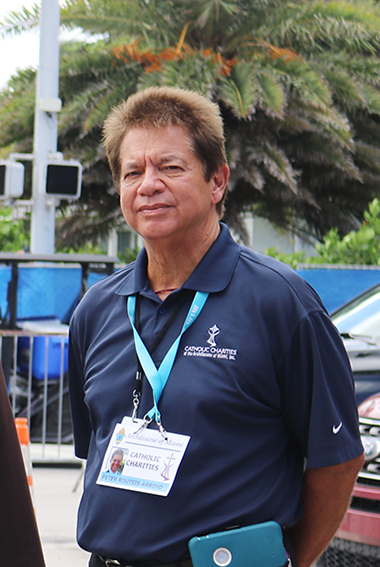 Peter Routsis-Arroyo, executive director of Catholic Charities for the Archdiocese of Miami, said those affected by the collapse of Champlain Towers South will need long term help finding new permanent housing, and Catholic Charities will be there to help them.

Catholic Charities has been on the scene since day one, part of a large group of agencies — Jewish, Catholic, Protestant, non-denominational — working at a hastily created Family Assistance Center to help survivors and victims’ families cope with their losses, both material and spiritual.

Located at the Sea View Hotel in Bal Harbour, the center is managed by the Miami-Dade County Community Action Agency's Human Services Division with support from the Red Cross.

“That’s where the reputation of the Catholic Church and Catholic Charities comes in, and our longtime collaboration with emergency management,” Routsis-Arroyo said. “They’ve invited the agencies they know really have the pulse on the ground.”

Since June 28, the center has been staffed daily, from 11 a.m. to 5 p.m., by one counselor and one staff member from Catholic Charities' New Life Family Shelter.

That’s fine for the early stages of the disaster, especially one where so many of those impacted, and the relatives waiting for word on their loved ones, “are coming from around the world,” Routsis-Arroyo said.

But eventually, the biggest need will be permanent housing, since even those who survived lost their homes when the remaining portion of the building was demolished July 4.

“Besides those who have survived who weren’t there when it happened and have no place to live, you have additional families who have been evacuated from the building next door,” Routsis-Arroyo said. “When you lose your home, it’s a tremendous amount of trauma that goes with it, regardless of your economic status.”

Finding permanent housing is “a long-term need,” he added. “That doesn’t happen in the next month.”

And that’s when Catholic Charities takes over. Staff of its New Life Family Shelter can provide case management to help those families find an apartment they can afford and help them pay rent for six to 12 months.

“Whatever the government doesn’t pay for, we fill in the gap. Whether it’s housing, furniture, insurance, transportation, help to relocate, help to find a new job. All of that is what we do,” Routsis-Arroyo said.

And the funds for all that come from donations made directly to Catholic Charities (To donate, go to ccadm.org)

As for grief counseling, the agency provides that as well, though it might be a little too early just yet, Routsis-Arroyo said. “We’re still in search and rescue. We’ve still got families waiting. You’re beginning the realization that there are no more survivors.”

When their relatives’ bodies are recovered, he noted, “they’re going to go through that same (grieving) process again.”

On July 7, day 14 since the collapse, authorities announced the end of search and rescue and the beginning of the recovery effort; by July 17, the death toll had risen to 95 out of a total 97 reported missing.

This article appeared first in the July 2021 edition of the Florida Catholic, which went to press July 9. The number of dead and missing were updated when it was posted online.