We can't turn our backs on 'modern-day Lazaruses' 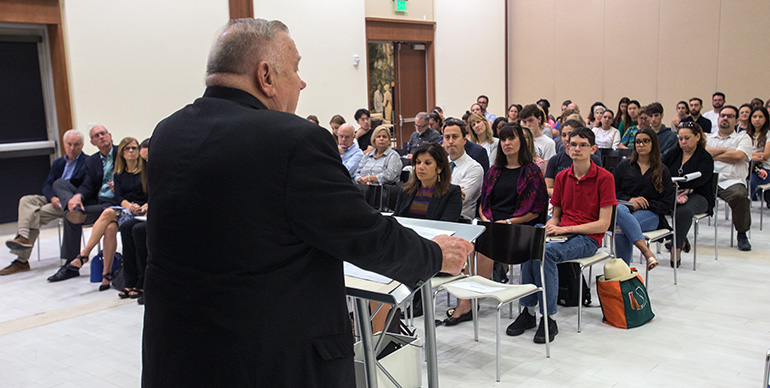 Archbishop Thomas Wenski addresses a University of Miami forum on "Who Is Our Neighbor? Immigration in Light of Catholic Social Teaching," held in the Newman Alumni Center, Oct. 21, 2019.

CORAL GABLES | At a University of Miami Forum on Religion and Public Life, Archbishop Thomas Wenski affirmed the rights and dignity of migrants — from Syrian refugees to Mexican asylees — drawing upon his 18 years of advocacy for Miami’s Haitian community.

Amid the nation’s increasingly vitriolic immigration debates that often blame victims, the archbishop invited participants to consider “Who Is Our Neighbor?” in the light of Gospel compassion and Catholic social teaching. 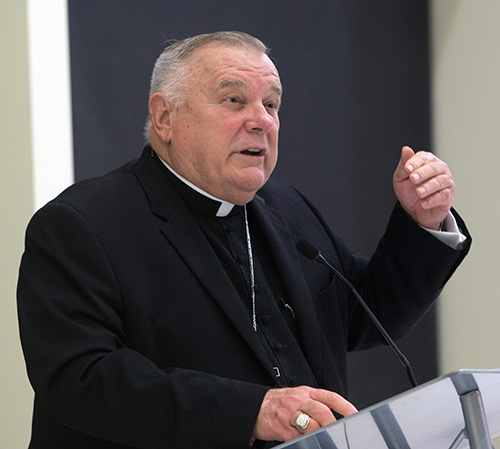 Archbishop Thomas Wenski speaks at a University of Miami forum on "Who Is Our Neighbor? Immigration in Light of Catholic Social Teaching," held in the Newman Alumni Center, Oct. 21, 2019. 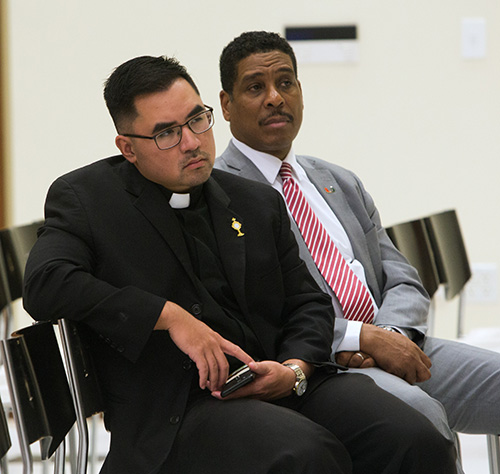 Father Philip Tran, Catholic Campus Ministry chaplain at the University of Miami, and Patrick Stewart, UM's executive director of Development, College of Arts and Sciences, listen to Archbishop Thomas Wenski speak at the UM forum on "Who Is Our Neighbor? Immigration in Light of Catholic Social Teaching," held in the Newman Alumni Center, Oct. 21, 2019.

“Christ came to save ‘the least, the last, and the lost.’ God takes the side of the poor, the oppressed, the marginalized — we can, too, and must take their side as well,” he said. “Pope Francis at Lampedusa warned against the ‘globalization of indifference.’ Today’s boat people, like those African refugees in the Mediterranean or the Haitians in the Caribbean, are modern-day Lazaruses who suffer in misery on our doorsteps.”

Sponsored by the department of religion, the ninth annual forum took place Oct. 21. The archbishop’s lifetime of immigration advocacy includes past service as director of Catholic Charities and chair of the Catholic Legal Immigration Network (CLINIC).

The archbishop offered a historical perspective on Americans’ immigration ambivalence and restriction movements. The Know-Nothing party of the 1850s opposed Catholic immigration of Germans to the Midwest and Irish to the East as a threat to the security of native Protestant Americans.

The influx of Polish and Italian immigrants in the 1920s prompted Congress to enact legislation to severely restrict immigration, similar to that proposed today by groups like NumbersUSA and White House advisor Stephen Miller.

“I am always amazed how many Catholics are unaware of how much the anti-immigrant nativism that emerged in the 19th century and that survives today was and is a manifestation of a deep anti-Catholicism that has yet to be fully expunged from our national consciousness. I heard on talk radio — and I read in blogs — commentators saying that bishops are pro-immigration because we are just trolling for new Catholics to fill our emptying pews,” he said. “But our pro-immigrant advocacy is about more than enlightened self-interest. It is a lived application of the Gospel message itself: ‘I was a stranger and you welcomed me.’” 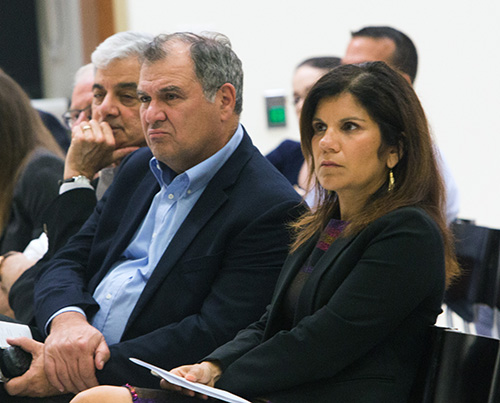 Michelle Maldonado, religious studies professor at the University of Miami, and Leonidas Bachas, dean of UM's College of Arts and Sciences, listen to Archbishop Thomas Wenski speak at a University of Miami forum on "Who Is Our Neighbor? Immigration in Light of Catholic Social Teaching," held in the Newman Alumni Center, Oct. 21, 2019.

Migration is integral to human history, as it was for the Jews in Egypt and Abraham in Canaan, the archbishop said. “And soon after he was born, Jesus and the Holy Family were refugees in Egypt — not unlike the millions of Syrians and Venezuelans displaced in neighboring countries.”

Today, he reported, there are over 63 million refugees, many stuck in camps from Turkey to Bangladesh and thousands more stranded along the Mexican border. But the government announced a refugee limit of 18,000 for the next fiscal year, the lowest since 1980.

Archbishop Wenski affirmed that people have a right to migrate to support themselves and that the undocumented have human rights to be respected. Refugees and asylum seekers must receive protection, even temporarily — including nearly 3,000 Haitians and 600 Cubans who were interdicted at sea and returned in the past 18 months. Nations have a right to control their borders, he said, but obligations to solidarity trump sovereignty. He cited how the U.S. turned away the St. Louis ship of Jewish refugees in the 1930s, 253 of whom later perished in the Holocaust.

The current system has created an underclass of 10 million undocumented without labor rights, who are dehumanized and labeled criminals while only breaking civil law.

“In the U.S. experience, the economy needs immigrant workers and even those without legal papers can find work,” he said. “Fixing of immigration does not require the demonization of ‘illegals.’ America has always been a land of promise and opportunity for those willing to work hard. We can provide for our national security and secure borders without making America, a nation of immigrants, less a land of promise or opportunity.” 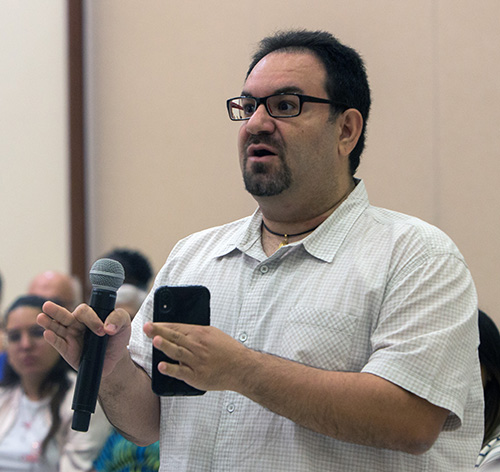 Louis Hernandez, a University of Miami alum, asks what the Catholic Church can do to unify Catholics on various political issues during a question and answer session following Archbishop Thomas Wenski's talk at a UM forum on "Who Is Our Neighbor? Immigration in Light of Catholic Social Teaching," held in the Newman Alumni Center, Oct. 21, 2019.

While the rich and highly skilled find ways to migrate, the Church’s advocacy focuses on the poor and powerless. “Globalization has made us all neighbors but it hasn’t made us brothers and sisters. For that to happen we’ll need to listen more to Matthew, Mark, Luke and John than to Steve Miller and the immigration restrictionists,” he said.

For the Church, a good place to start would be the extension of Temporary Protected Status for Haitian and Central Americans and Deferred Action for Childhood Arrivals. But “comprehensive reform with a path to legalization for those already working in the U.S. and with provisions for addressing future labor needs would alleviate the flow of undocumented workers in the country and would allow better management of the border,” the archbishop said.

“If it breaks humanity it hurts me. If I don’t take action, I’m part of the problem. How do we work together to love our neighbors? And what better place to do that than in a college sitting with the exchange of ideas,” Capote reflected. “We have to start building a consensus to build cooperation, a balanced approach, and hopefully (the Church) can guide our elected officials in finding commonalityÃ¢â¬Â¦ How do we promote justice and also defend human dignity of people here, which is an absolute right?” 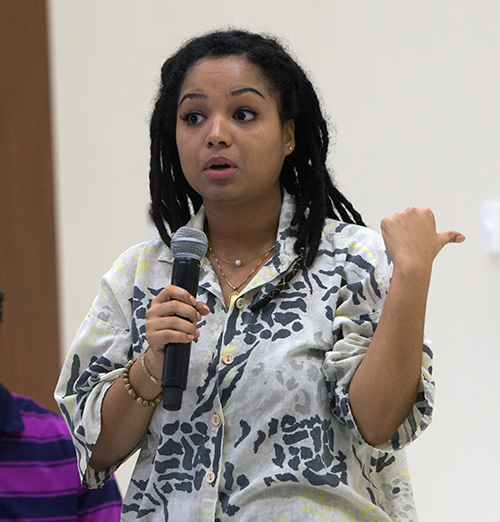 Rae Williams, a University of Miami political science major and vice president of UM's Amnesty International chapter, asks about Catholic Legal Services during the question and answer session that followed Archbishop Thomas Wenski's talk at a UM forum on "Who Is Our Neighbor? Immigration in Light of Catholic Social Teaching," held in the Newman Alumni Center, Oct. 21, 2019.

“I thought it was interesting hearing some of the history and how the Church has formulated its thoughts on immigration and how they are approaching the issue as long-time advocates for immigration reform,” he said. “Most of what I heard him say was encouraging because I do think his line (is true) that an individual can be reduced down to just a problem. And I think I’ve really been frustrated because you see such obvious crimes like taking a child from its mother and breaking up families knowing that you’re harming these kids for life and that somehow people feel like it’s justified.”

Stewart also noted the culpability of developed countries in migration from poor countries. He cited how after Haiti won independence, France forced restitution payments and other nations undermined it. “I don’t think anyone ever talks about what we’ve taken from other countries in the world and those countries where immigrants come from.”

Gary Cameron, UM chaplain for the InterVarsity Christian Fellowship, said there needs to be more clear thinking beyond “heated discussion on Facebook.” He liked the acknowledgment of the right of nations to control borders and also human dignity.

“I was in Canada a couple years. They are very strong about how you go in and out and we should be too. But I did appreciate his counter of let’s take it case by case. The example of the Jewish ship turned back, that could have been done case by case out of respect for their human dignity,” he said. “I don’t like the effort to get rid of all these young people who grew up here and then we’re going to send them back to some country they’ve never seen.”

Professor David Kling, chair of the Department of Religious Studies, noted that both Democrats and Republicans have vacillated on immigration over the years and that the Church offers a consistent moral policy foundation beyond political expediency.

“It wasn’t specifically Catholic teaching but the kind of teaching that many Christians would embrace whether Protestant, Catholic or otherwise,” Kling said. “But here in Miami immigration has always been a very important issue and we were just very fortunate to have him. I view it as a prophetic voice that calls leaders to a higher standard.”

Corrected: Nov. 22, 2019. The person in the photograph with Michelle Maldonado is Leonidas Bachas, dean of the University of Miami's College of Arts and Sciences, not Paul DeMarie, as stated in the original caption. 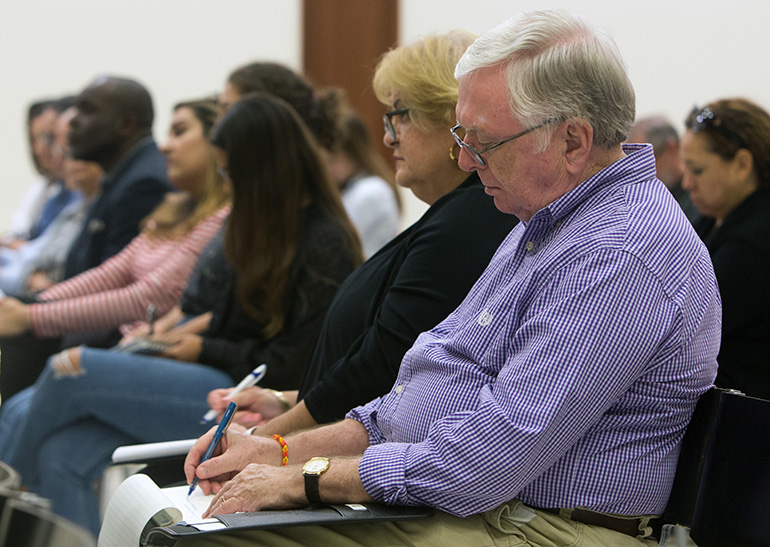 Peter England and Julie Romero, of St. Louis Church in Pinecrest, take notes during Archbishop Thomas Wenski's talk at a University of Miami forum on "Who Is Our Neighbor? Immigration in Light of Catholic Social Teaching," held in the Newman Alumni Center, Oct. 21, 2019.