MIAMI | In 1961, at age 14, Carlota Morales arrived in Miami from Cuba. She landed on a Friday to live with cousins, went to Sts. Peter & Paul Church that Sunday and started school at Miami Senior High on Monday. One of the few things the aspiring educator salvaged from Havana was her algebra textbook.

Her parents soon joined her, and the uprooted family rebuilt their lives from scratch. Morales earned bachelor’s and master’s degrees at the University of Miami, taught a year at Academy of the Assumption Academy and then landed a sixth-grade position at Sts. Peter & Paul School — with 64 students in one class.

“The enrollment in the Catholic schools with the Cuban influx was so great,” she said. “It was a very pleasant experience. We had two breaks a week, planning periods, not every day because the school couldn’t afford it. That was that, we knew we had to do it,” she recalled. “I had no doubt that that was what I wanted to do.” 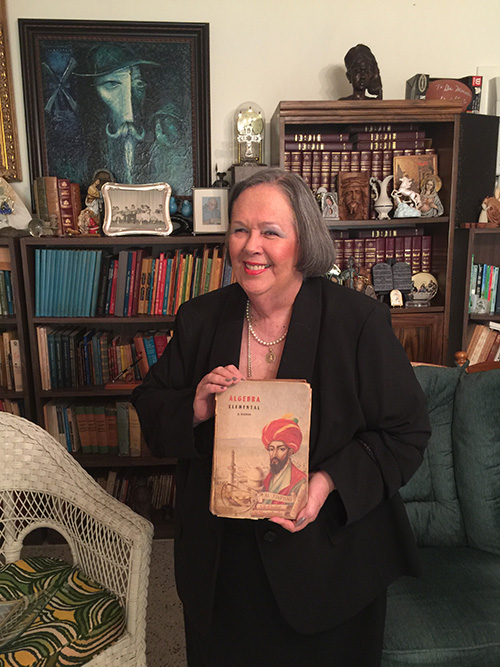 Carlota Morales is shown here amid the memorabilia of 50 years in education at her Shenandoah home, where she has lived since 1967. She is holding the algebra textbook she brought with her when she left Cuba in 1961.

“It’s still very emotional especially because I have dedicated my life to that. I have no children of my own. I have no brothers and sisters, so Sts. Peter and Paul — as St. Agatha’s once was — was my life,” reflected Morales in accented English. “I think there’s a time when you have to let go and move on. I’m 72, started when I was 20.”

She recalled the advice of her very moral father, a physician, with whom she lived until his death at 92. “He always used to tell me ‘don’t try to go into a hole.’ If I’d complain about something he’d say get out of the hole and move on.”

Morales sat in her Shenandoah home, where she has lived since 1967. It is graced with religious, school and family relics and a wall of framed accolades, from the U.S. National Distinguished Principal award to National Catholic Education Association Distinguished Principal Award. She’s also in Miami Dade College’s Hall Alumni of Fame — retired president Eduardo Padrón was a classmate.

She especially cherishes the papal Benemerenti medal she received from Archbishop Thomas Wenski. “It was a very humbling experience. I have not lived in vain because I loved to do it,” said Morales, who prays the rosary daily. “And even though my bank account is not huge I think I have a bank account with him (God) and he will take care of my needs.”

Morales earned her doctorate at UM while working at Sts. Peter and Paul. She was hired by Father (now Bishop) Felipe Estevez as principal at St. Agatha’s when the school operated from a shopping center during construction. “Parents knew they had to come very early. If not, they were going to fight the trucks of Publix.”

“It was a very exciting time because we had to do so much. They were building the school and (it was) knowing what you would want and the things you’d dream of and sometimes you didn’t have the money,” said Morales. For her retirement Mass, the choir sang Don Quixote’s “The Impossible Dream” because “deep inside I’m a dreamer. If you can dream it, you can make it.”

And she saw each student’s potential. “I think that every child can learn according to their God-given abilities,” affirmed Morales. “You take the child where the child is and then try to help him or her move forward.”

Patricia S. Hernandez taught the first special education class and appreciated Morales’ commitment to the program that served as a model for other schools. “She’s just inspirational. She has a lot of vision. She also has a love of serving children in new ways and thinking outside the box,” said Hernandez, now St. Agatha’s principal. “It was an honor to work with her and she inspired a lot of fellow principals and teachers to continue their commitment to Catholic education. I think she really is a person that left things behind that gave fruit. She really served as an exemplary principal.”

St. Brendan Elementary counselor Dr. Vickie Borras’ daughter graduated from that first special education class. “I’ll be forever grateful,” she said. “Even after my daughter left St. Agatha, (Morales) was always asking how she was and trying to give help or suggestions.”

Borras later worked at Sts. Peter and Paul with Morales and saw that same spirit. “It’s been for her a vocation, a ministry,” she said. “She’s been an educator for so many years but I was always very struck by just her caring. She’s always willing to help whomever.”

Morales never forgot how she herself once skipped lunch because she couldn’t afford a 10-cent bologna sandwich. “The only flag that I can salute is an American flag. It was very good to all of us, gave us the opportunity to start a life again,” she said. “I knew what is was not to have anything.”

In facing inevitable leadership challenges, she found that some problems “have no solution” and “we learned to agree or disagree” as she stood firm on her positions. Looking back, she laments that the charter school boom has hurt enrollment in Catholic schools. She steadfastly believes that Catholic schools provide the best foundation for faith, friendships and success.

“Catholic education is the best investment that any parent can make not only because of the spiritual benefits but they form a bond and a community and a family that’s hard to find anywhere else,” said Morales.

That community support and her deep faith sustained her after her father’s death. Now she loves seeing former students find success — such as a Baptist physician who recently greeted her at a restaurant.

Attorney Hoss Hernandez, who had Morales for eighth grade math, reminisced that “she ran a tight ship.”

“She was an excellent teacher. I steered my way clear of getting in trouble with her. I got in trouble everywhere else.”

He also sent his son to Sts. Peter and Paul and saw Morales as a strong, moral leader who was straightforward, prayerful and available.

“She’s put everything into that school,” he said. “When I heard she was retiring three or four months ago I was like in shock because she’s part of that place.”

Referring to many classmates who also enrolled their children at Sts. Peter and Paul, he noted that “everybody would send their kids with their eyes closed because they knew it was a good educational foundation and spiritual foundationÃ¢â¬Â¦ I feel it has a lot to do with her and her leadership and what she stands for and how she lives.”

Now Morales looks forward to new endeavors in retirement, seeking a return visit to Europe and the inspirational St. Joseph’s Oratory in Montreal. She recalled her daily message to students in morning announcements: “Please remember today is the first day of the rest of your life.”

“I’m 72 and I’m still dreaming,” she said. “I think life offers so many opportunities and you never know where it’s going to take you.”

Monica Santos Lauzurique - 10/09/2019 03:39 PM
Dr Morales is an amazing educator and mentor! She will be sadly missed but I know that her leadership continues to live is all the students she came in contact with through the years. I am a product of Sts Peter and Paul, Catholic School System but most especially Dr Morales.