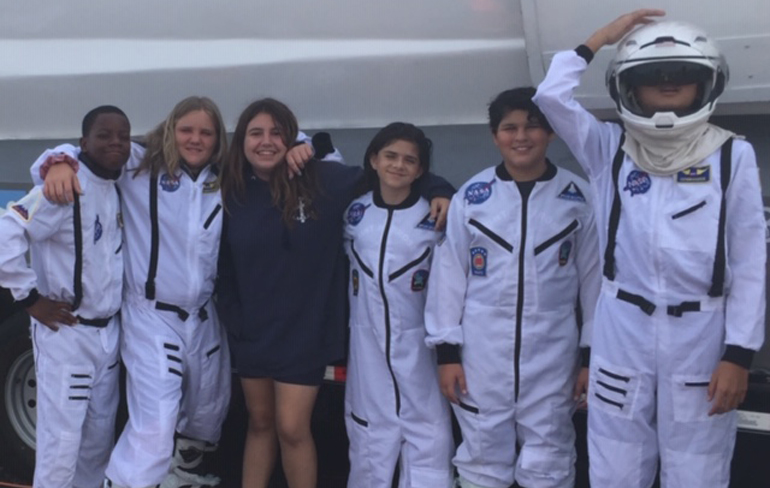 Astronaut couture: Students from St. Ambrose School are dressed and ready to go as astronauts on the Experium Space Colony Mission. May 7 and 8, the STEM (Science, Technology, Engineering and Math)-like escape room and simulator gave students the opportunity to fly to Mars and solve missions on the red planet.

DEERFIELD BEACH | A spaceship arrived at St. Ambrose School’s parking lot May 7 with a very important mission for students: get to Mars and help save the Martian Colony. About 70 middle schoolers and faculty members accepted the task, and after putting on space suits and helmets, they took off for the red planet. 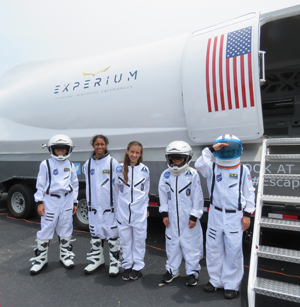 Rocket girls, and rocket guys: Students from St. Ambrose School are dressed and ready to go as astronauts on the Experium Space Colony Mission. May 7 and 8, the STEM (Science, Technology, Engineering and Math)-like escape room and simulator gave students the opportunity to fly to Mars and solve missions on the red planet.

St. Ambrose’s science teacher, Agnes Gregory, had found a 48-foot-long rocket simulator that gave students a virtual experience of flying to Mars and completing STEM (Science, Technology, Engineering, Math)-like activities on the planet. It was “too good of an opportunity to pass up,” she said.

She approached the school's principal, Lisa Dodge, and said “Listen, there’s a grant and you can get a rocket.”

After Gregory elaborated on the rocket simulator escape room, Dodge was excited. “I’m hoping that this got them on the road to enjoy astronomy,” she said.

While Astronaut 101 and Mars Rover Test Driving is not part of the science curriculum at St. Ambrose, the Experium Space Colony on Mars Mission experience tied in with the school’s Earth, Space and Physical Science units. The school also has a weekly robotics class available to middle schoolers, which runs throughout the school year.

“I’m big on tying things into the curriculum,” said Gregory. “The robots they are building in robotics are similar to the rovers exploring Mars.” The ones on Mars, however, are more like “robots on steroids. It’s the same principle, you are remotely controlling it and these are some of the things you could do in real life,” she added. 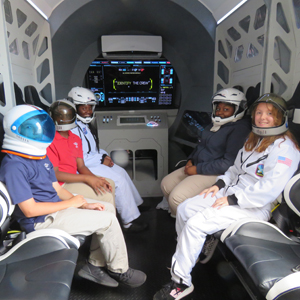 Waiting for lift-off: St. Ambrose School students sit inside the cabin of the Experium Space Colony Mission spaceship. The rocket simulator gave students the opportunity to participate in a hands-on mission on Mars.

Another real-life lesson that comes with the Experium Space Colony simulator is teamwork. Groups made up of five or six students had to work together to face challenges like engine malfunctions, space lab work, water purification, space preparedness and more in under an hour.

Students did a great job of keeping the solutions to their team’s mission confidential from other teams waiting for their turn on the simulator. Gregory noted that the majority of students completed their missions in 55 minutes or less, and those that did not were close.

“All of science is problem solving. You have a problem? You work as a team to solve it in some way or another,” said Gregory.

The kids raved about it, many of them wanting photos in their space suits, and many of them wanting to go on mission again. While Experium’s goal is to get students excited about science from an early age, Gregory said she believes that “from the beginning, we’ve had an exploration gene.”

And whether that gene takes humanity to the depths of the Earth, or the farthest reaches of the universe, might now depend on one of her students. 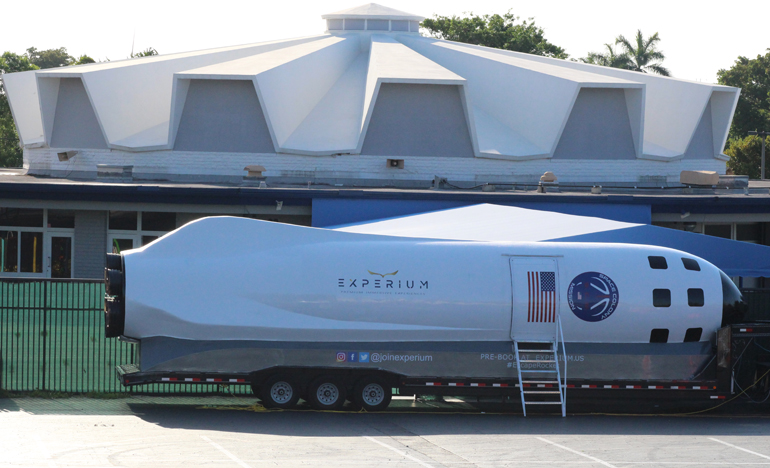 Houston, we have a spaceship: The 48-foot-long Experium rocket and mission simulator, parked in St. Ambrose School's parking lot, waits for student astronauts to take on their Space Colony Mission to Mars. About 70 middle schoolers at the school participated in the STEM (Science, Technology, Engineering and Math)-related escape room on May 7 and 8.

Other News from St. Ambrose School