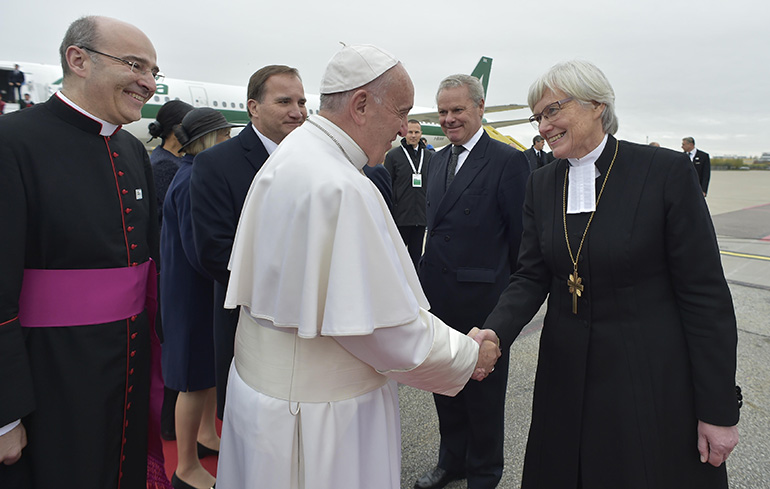 In this Oct. 31, 2016 photo, Pope Francis arrives at Malmo International Airport in Sweden for his apostolic visit to commemorate the 500th anniversary of the Reformation.

MIAMI | In a biblical-level irony, a historic rupture in Christendom â the Protestant Reformation â is being used by South Florida Catholics and Lutherans to work and pray for unity.

Oct. 31 will mark the 500th anniversary of the day in 1517 that Martin Luther nailed 95 theses onto the door of the castle church in Wittenberg, Germany, challenging the authority of the Church. From that date flowed a host of conflicts, by word and weapon alike, and major divisions that persist to this day.

But leaders on several levels â even up to the Vatican â have been working for understanding and reconciliation. And their talks have led to plans for big-scale events in South Florida as well as elsewhere.

Ecumenical leaders on both sides hope Reformation 500, as it's being called, can help heal divisions between the communities.

"We're trying to use 'commemoration,' not 'celebration,'" said the Rev. Walter Still, chair of the observances for the Florida Bahamas Synod of the Evangelical Lutheran Church in America. "We can never celebrate something that divided the church. From that, we can see how to go in a positive way to re-form the church."

Echoing the sentiments was Father Pat O'Neill, director of the Office of Ecumenical and Interfaith Ministry for the Archdiocese of Miami.

"We hope our people will become more aware of the commonalities between Lutheran and Catholic prayer, dialogue and social action," Father O'Neill said. "We hope the events will provide new enlightenment to people, and give an opportunity not just to mark the anniversary, but celebrate it by being involved."

Reformation 500 plans were first announced in an October letter by two chief shepherds in Florida: Archbishop Thomas Wenski of Miami and Bishop Robert G. Schaefer, outgoing head of the ELCA synod, based in Tampa.

"All human history is filled with lights and shadows. Thus this occasion is particularly poignant," reads the joint letter, issued under the coat of arms of both bishops. "But observed together, hopefully we can deepen our ecclesial relationships and our mutual love for Jesus Christ."

In a watershed moment, Pope Francis joined leaders of the Lutheran World Federation Oct. 31 in Lund, Sweden, to launch the Reformation 500 year.

"We Christians will be credible witnesses of mercy to the extent that forgiveness, renewal and reconciliation are daily experienced in our midst," the pope said during the prayer service in the Lutherans' Lund cathedral, according to Catholic News Service.

That service used a new liturgy called "Common Prayer," based on the Catholic-Lutheran document "From Conflict to Communion." The same liturgy will be used in October at St. Mary Cathedral, Miami, led by Archbishop Wenski and Bishop Schaefer's successor. 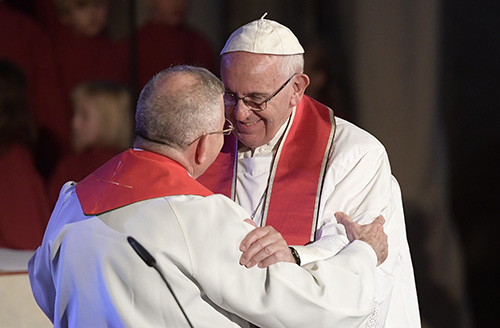 In this Oct. 31, 2016 photo, Pope Francis embraces Bishop Dr. Munib A. Younan, president of the Lutheran World Federation, during a joint prayer service at the cathedral in Lund for the pope's apostolic visit to commemorate the 500th anniversary of the Reformation.

For the archdiocese, Reformation 500 events are being coordinated by St. Thomas University in Miami Gardens through its Center for Ecumenical and Interreligious Dialogue. It's a fitting role because Luther was an Augustinian â the same order that founded the university.

"There has been a pretty ugly history of denominationalism and sectarianism in this country," said Father Elias Bouboutsis, director of the ecumenical center. "So for a local congregant to see other churches not as competitors or aliens, that's really important. We can see (religious communities) as a mosaic, not phalanxes of different armies."

It's ironic also that what is commonly called the Reformation didn’t lead to one â instead, it split European Christendom, resulting eventually in today's 9,000 Protestant denominations. But reforming the Church, not forming a new church, is what Luther intended.

There was much to reform in the 15th century, modern church leaders acknowledge. For Luther, the starting point was the sale of indulgences: money for remission of temporal punishment of sins, often used to raise funds for projects like the Crusades.

Over the years, he broadened his critique to matters like papal authority, the Church's teaching on the sacraments, and the right of the hierarchy to interpret scripture. Rhetoric escalated on both sides, and he was excommunicated in 1521.

But his movement spawned others. John Calvin and his followers founded Reform Christianity in Switzerland. Around Europe, Anabaptists formed their own interpretation of the faith. And Henry VIII declared himself the head of the Church of England, a rift with Rome that finalized under Queen Elizabeth I.

The Catholic Church doubled down with the 16th century Council of Trent reaffirming the sacraments and the authority of both scripture and Church tradition. But it also curtailed some of the worst abuses of Luther's time.

Still, Catholics and Protestants remained opponents, a condition that persisted until the landmark Second Vatican Council of 1962-65. Among Vatican II's findings, one of the most electrifying was that non-Catholics were not enemies but "separated brethren."

Russell Meyer, the ecumenical representative for the Lutheran synod, praised Vatican II as "a singular event in human history. Never before had such a large number of leaders gathered from across the globe. And it was not just in-house â the working groups had the participation of observers including Protestants, Muslims, Hindus, Jews. It was not only the Roman Catholic Church speaking to itself, but speaking to the world."

A major breakthrough came in 1999 as top Lutheran and Catholic leaders signed the Joint Declaration on the Doctrine of Justification, with world Methodist leaders also ratifying it in 2006. The 7,700-word statement overturned centuries of misconceptions, in which Protestants accused Catholics of working for salvation, and Catholics accused Protestants of shirking spiritual responsibilities.

"By grace alone, in faith that Christ's saving work and not because of any merit on our part, we are accepted by God and receive the Holy Spirit," the document reads. It adds, however: "The working of God's grace does not exclude human action â¦ we are called to serve."

Meyer quoted a footnote to the 1999 statement by Pope Benedict XVI. "He said that the importance of the work is to stand in the street together and proclaim the gospel for today in a language that the world can understand. We have to stop reading the Bible against one another and start reading it together for the sake of the salvation of the world."

Some issues have thus far eluded agreement. For Father Pat O'Neill, the main archdiocesan ecumenist, the biggest matter is the "succession of Peter in ordination. Rome is very insistent on tracing its authority from Peter. Many issues come off of that, like authority and practice. But that's key."

Rev. Still on the Lutheran side agreed, calling it "matters of authority and sacramental theology" that affect views of ordination. But he was optimistic for a resolution because the ELCA already has "pulpit and altar fellowship" with many Protestant bodies, including Methodists, Presbyterians and Episcopalians.

Other matters of Catholic-Lutheran division include:

Father O'Neill agreed that some questions still resist resolutions. But he remained optimistic, not only through faith, but also through some visible signs of cooperation. One, he said, was a Lutheran-Catholic group that visits the Camillus House homeless shelter in Miami twice a month.

"The observance of the anniversary is one clear sign of God's grace," he said. "The Spirit of Jesus is bringing us closer to communion."

Rev. Still, the Lutheran ecumenist, agreed that mission work helps. "I think Christ is always calling his church to mission. Our world is in a state of division, and it's looking for a place where they see unity happening. I feel that Jesus has gone ahead of us in all our work."