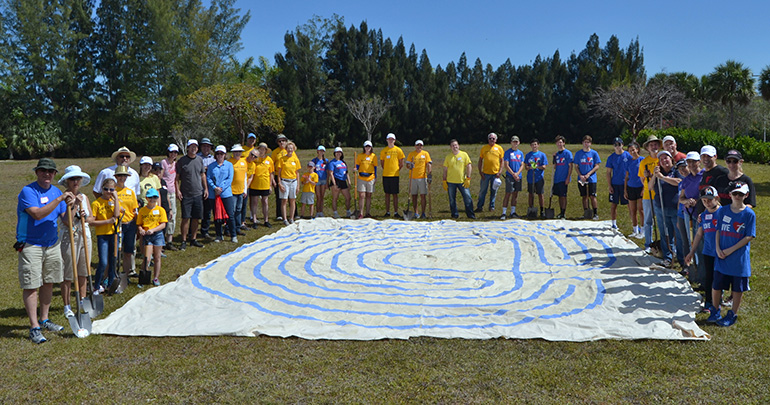 Workers line a cloth labyrinth, showing the size of the structure for which they broke ground.

PINECREST | A labyrinth â a meandering path â may seem an odd way to commemorate the Protestant Reformation. Especially when it's built by Catholics and Lutherans, whose forebears caused the split. 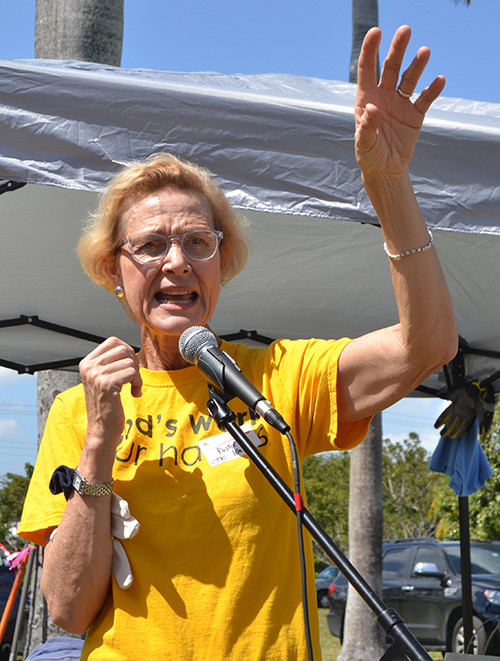 But Vinnie and Barbara Tria literally dug into the idea during a recent groundbreaking for an interfaith prayer labyrinth. As a Lutheran-Catholic couple themselves, they knew it could work.

"It's wonderful that they're using the 500th anniversary of the Reformation â a point of separation â as an opportunity to celebrate and explore points of unity between the churches," said Vinnie, pausing from shoveling dirt for the labyrinth on the grounds of the archdiocesan MorningStar Renewal Center. He smiled. "It's especially meaningful for our family, because we've had unity for more than 30 years."

In South Florida, planners hope the 40-foot path will attract people of many faith traditions â especially those involved in the split in Christendom that began with Martin Luther five centuries ago.

The idea was working not only for the Trias but for the 40 people, Lutherans and Catholics alike, who helped break ground for the labyrinth Feb. 26.

"It's cool how we can all serve each other like Jesus," said Nicholas Richards, a parishioner at St. Louis Church and a member of MorningStar's Peer Ministry program. "It's good that people of different religions can come together to do something."

Barbara Tria, who attends Christ the King Lutheran Church in Pinecrest â her husband is a parishioner at St. Augustine in Coral Gables â agreed. "It brings resonance to how much we have in common. Spirituality is good for everyone. And prayer makes you a better listener."

She noted the title of the labyrinth campaign: "Digging Deeper than Doctrine."

The labyrinth was the first in a series of events planned by the Archdiocese of Miami together with the Florida-Bahamas Synod, part of the Evangelical Lutheran Church in America. Called Reformation 500, the plans include a lecture and a dialogue at St. Thomas University in Miami Gardens, and a joint commemoration of the Reformation at St. Mary Cathedral in Miami. 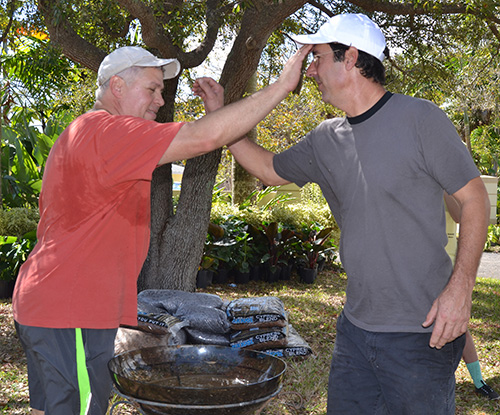 Michael DeFerrari, left, and Tony Buzone bless each other during groundbreaking for the new Prayer Labyrinth. 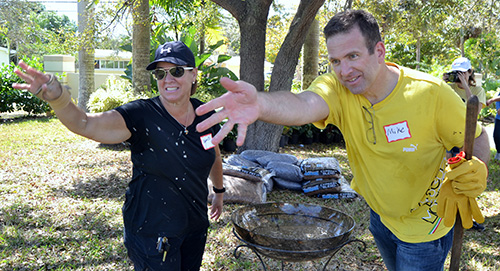 Annette Vondrak and Michael Morejon bless the ground of the planned Prayer Labyrinth.

They heard from Sue DeFerrari, director of ministry at MorningStar. They also joined in a prayer of dedication by Lutheran minister Kathryn H. Carroll, who then directed them to a large basin beneath an oak tree.

"Go two by two and put your hand in the water," she said. "Bless each other, then splash some water into the circle. It will make a sacred space where many people will come."

The volunteers looked over a full-size cloth labyrinth on the ground to get an idea of the size of the final result. Then they took up positions around a 40-foot circle that had been spray-painted the previous day. Their instructions were to dig a furrow four or five inches deep.

For three hours they attacked the shallow soil, first with shovels, then occasional picks as they ran into rocks. Sweat flowed as the afternoon wore on, but the MorningStar staff was prepared; they'd set up tents and poured cups of water for break times.

In future weeks, sand and limestone will be laid down to prepare for a path of brick pavers. When the land is ready, the group will order a "kit" of pre-shaped pavers from The Labyrinth Company, a Connecticut-based firm. They expect to finish by summer.

Much of the research was done by Francesco Salgado, an intern with Miami-based O'Leary Richards Design Associates. He discussed style preferences with MorningStar and compared designs offered by The Labyrinth Company.

DeFerrari and Carroll decided on the "Breamore" design, one of 22 kits the company offers. The design, named for a grass labyrinth in England, resembles the medieval Chartres Cathedral in France. But it omits the flourishes at Chartres, like a rosette at the center and "lunations," a halo of semicircles, around the rim.

They originally planned a labyrinth of eight circuits, said Salgado, also a student in landscape architecture at Florida International University. "We decided on 11 because it would hold more people and take more time."

Some of the workers came because of their own experiences with labyrinths. 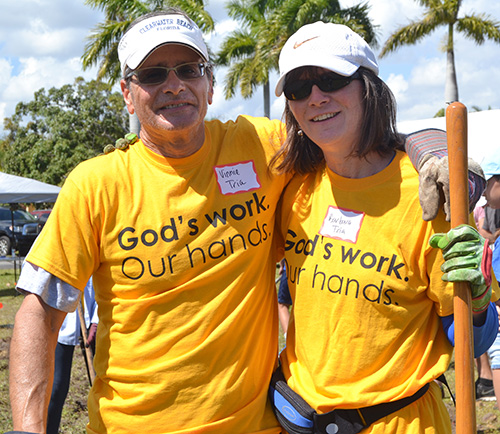 Vinnie and Barbara Tria, a Catholic-Lutheran couple, pause during a labyrinth groundbreaking at MorningStar Renewal Center.

Linda Murillo said that two years ago, she walked a large labyrinth in North America, in Sedona, Ariz. Now she wanted to help bring the experience to people in South Florida.

"I think it'll help the community, and maybe bring a little peace," said Murillo, a member of Christ the King Lutheran.

The lessons filtered down to 11-year-old Chloe Vokaty of Living Faith Lutheran Church in Pembroke Pines. She said she walked a labyrinth two years ago.

"I like the idea of walking to get to God," Chloe said. "And I like it that we get together to serve the Lord. I'm excited for this."

Some of those at the groundbreaking, though, were there for simpler reasons. Four students from Columbus High said simply that they do a lot of things together.  It's just that those things include benevolent works.

"I like the experience of building something for the community," said Eduardo Yepes, one of the four. "When it's done, you can look back and say you helped do it."

That's exactly what Carroll and DeFerrari wanted. The labyrinth is part of a "service component" to the Reformation observances, balancing the educational tinge of other events, said Carroll, a member of ELCA's anniversary task force.

A building project will also leave a "permanent legacy," added Carroll, also pastor at Christ the King Church. "We wanted to start with people working alongside each other and building a relationship. Along with outreaches like serving the homeless, we will always have this to show as a lasting gift."

Added DeFerrari: "Things fell together when we thought of Digging Deeper Than Doctrine. We hope to model openness, collaboration and unity."

Even with volunteer work, however, the labyrinth is expected to cost $30,000. Besides the labyrinth itself, the plan calls for shrubs and benches nearby. The archdiocese, through its Office of Ecumenical and Interfaith Ministry, plans to raise a third of that.

MorningStar could also use more volunteers â especially those who can bring picks and shovels, DeFerrari said. 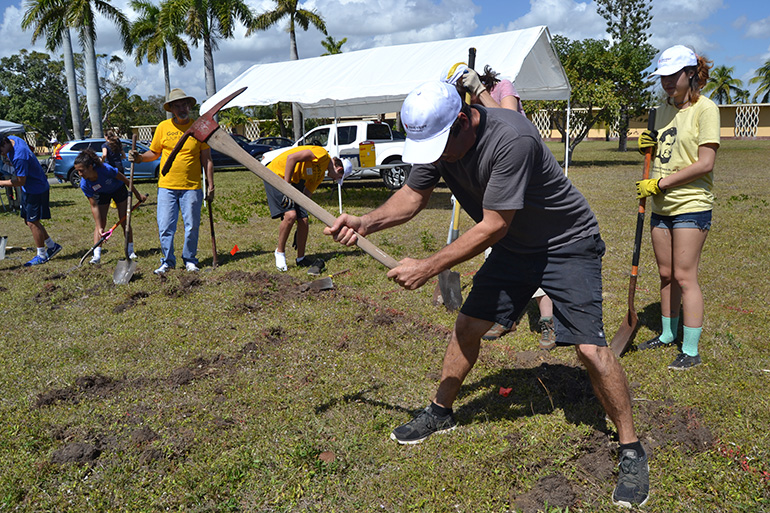 Tony Buzone uses a pick during the labyrinth groundbreaking at MorningStar Renewal Center.