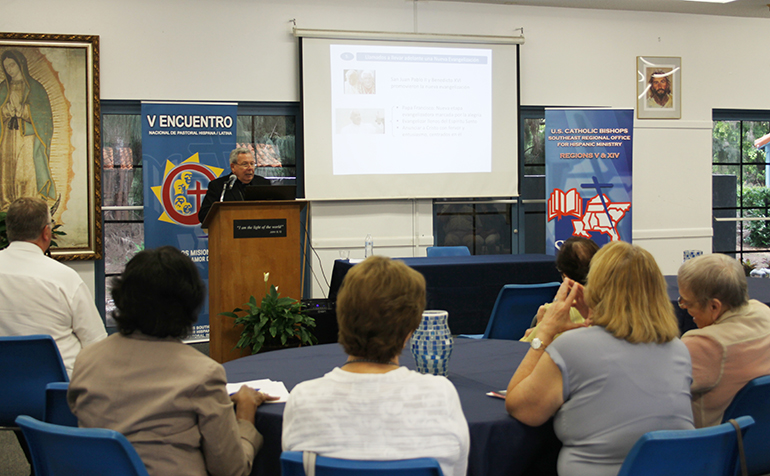 As part of the 40th anniversary celebration for SEPI, the SouthEast Pastoral Institute, Bishop Octavio Ruiz Arenas, secretary of the Pontifical Council for the New Evangelization, spoke about how Pope Francis conveys his expectations for re-evangelizing the world. 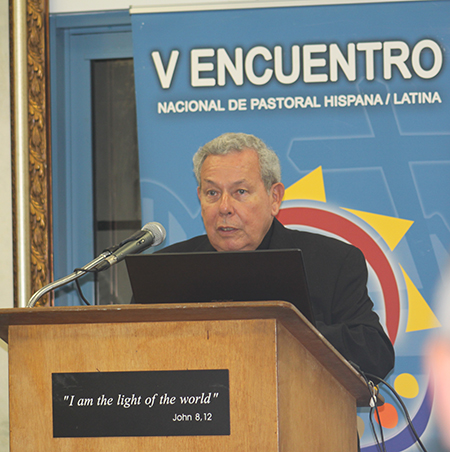 Bishop Octavio Ruíz Arenas, secretary of the Pontifical Council for the Promotion of the New Evangelization, explains the unusual language being used by Pope Francis to reach young people during the conference he gave at the SouthEast Pastoral Institute, SEPI.

MIAMI | If you speak Spanish, you have probably heard the terms “primerear” (literally “firsting” or going forth) and “misericordear” (literally “mercying”). They are neologisms, or words invented by Pope Francis to help people understand his message in a clearer, simpler way.

“What Pope Francis is trying to do is to make the message of the Gospel understandable to the young and to society in general, to give answers and comecloser,” explained Bishop Octavio Ruiz Arenas, secretary of the Pontifical Council for Promoting the New Evangelization, during a conference organized by the SouthEast Pastoral Institute (SEPI).

The conference on the New Evangelization in the Church of today, aimed at teachers, students and collaborators in the different SEPI programs, took place June 16, as part of events commemorating SEPI’s 40th anniversary.

The best-known term is to go forth â “primerear” â which appears in the encyclical Evangelii Gaudium, The Joy of the Gospel. It says: “The Church which ‘goes forth’ is a community of missionary disciples who take the first step.” As the pope explained: they get involved, they accompany, they yield fruit and they celebrate.

He added that this word came as a surprise when the document was presented, but what the pope is saying is that “we are to be the first to commit to the sweet joy of evangelizing.”

The pope insists that in order to go forth (primerear), we have to be “mercying.”

“He turns a gerund into an infinitive. It sounds weird, but deep down he is correct because to say that I have to exercise mercy is not the same thing as to say ‘mercying,’ which is a stronger action,” the bishop explained.

Both previous popes dedicated encyclicals to speaking about mercy. Pope Francis has been the permanent image of “mercying,” according to Bishop Ruiz Arenas.

As children of God, it is incumbent on all Christians to make the mercy of Jesus Christ present in the world today through our example and coherence of life. That example of being loving, helpful and merciful is what distinguishes the true credibility of the Church.

Pope Francis is asking men and women to be filled with mercy, a mercy that, having felt it in their own lives, becomes an experience that must be shared. He asks people to be patient, allowing space for the action of grace. He wants the Church to have great creativity, to look for new paths in order to evangelize, and to adapt to the world today. 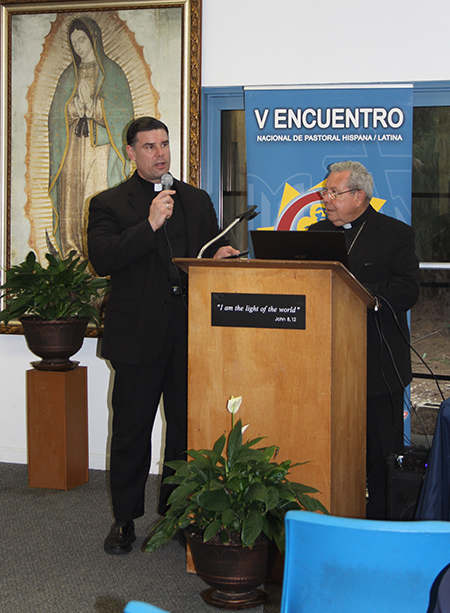 Father Rafael Capó, director of the SouthEast Pastoral Institute, SEPI, thanks Bishop Octavio Ruíz Arenas, secretary of the Pontifical Council for the Promotion of the New Evangelization, at the conclusion of his talk on the new evangelization and the Church today. The conference was aimed at SEPI's professors, students and collaborators. 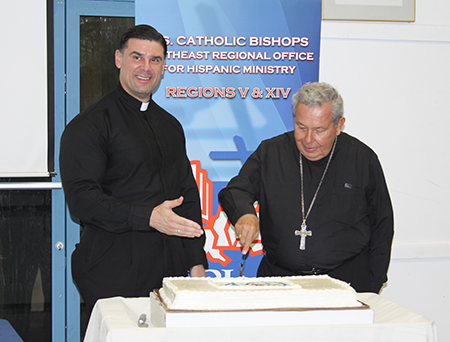 After his talk, Bishop Octavio Ruiz Arenas, secretary of the Pontifical Council for the New Evangelization, cuts a cake marking the 40th anniversary of SEPI, the SouthEast Pastoral Institute. Standing at left is Father Rafael Capó, director of SEPI.

The pope also speaks of the need for “missionarity,” an awareness that the Church’s purpose is to serve. “Missionarity” means to “be mission,” to be aware of our belonging to the Church and, as a Church, to try to fulfill that fundamental mission, which is to announce Christ. These actions, the going forth, the “mercying” and the “missionarity” should lead people to become authentic missionary disciples and heed the call of the New Evangelization.

Catholics are called from baptism to be missionary disciples, as the slogan of the V Encuentro says: Missionary Disciples, Witnesses of God's Love.

The disciple is the one who sits at the feet of the teacher to listen to the word of God and carry it in his or her heart. The missionary is the one who transmits the joy and happiness of that encounter.

Pope Benedict XVI said they are not two separate realities but that, having come to know Christ, we go out to communicate our joyful experience of the encounter, supported by the community.

A personal conversion is necessary to be a true missionary disciple. However, “my faith is not only about myself and Christ. It is a relationship in community, and this should lead us to a social conversion,” Msgr. Ruiz Arenas explained. He added that the Church is there to help the world seek the common good so that, in the end, our spiritual conversion allows us to express our love of God through love for our neighbor.

At the same time, a pastoral conversion demands greater participation of the laity in the evangelizing mission, not as mere assistants of the parish priest but by approaching the faithful and looking for those who are alienated. For that, testimony is essential.

Pastoral conversion also aims to have a more incisive female presence. “The presence of women in the Church is critical,” said the bishop. They not only help with the material aspects of the Church, but also with pastoral practice, in the administrative field, and they are fundamental protagonists in catechesis, or passing on the faith.

At the Holy See, some congregations and pontifical councils have begun to place women in positions of authority and importance. “And the same should happen in diocesan curiae, in the parishes. There are so many well-educated women with great capabilities that can bring fresh air, new ideas, greater boost to the pastoral and administrative work of the Church,” said Bishop Ruiz Arenas.

Pastoral conversion also means accompanying and listening to young people and the elderly. It must seek a parish ministry that is more pastoral than administrative, that creates small communities to set the missionary spirit in motion.

All this must lead to the creation of a new face for the Church, one which is missionary, which goes out to announce the Gospel with audacity, even against the current, as the pope says.

As a Samaritan Church, the option for the poor is the option to touch the flesh of Christ in them. As a prophetic Church, it testifies to the revelation by its closeness to people. As a charismatic Church, it constantly proclaims the good news by being in tune with today's world, trying to understand its language.

Pope Francis sums it up as a new evangelizing phase shaped by the first. He wants the Church to evangelize filled with the Holy Spirit, to proclaim Christ with fervor and enthusiasm centered on him, to present the message in an attractive way, with a missionary style of service, of open doors, that expresses the joy of promoting and presenting the living Jesus Christ, who offers salvation.

“We are not simply talking about a historical figure who did wonderful things,” said Bishop Ruiz Arenas. The New Evangelization aims to rekindle the fire of the Holy Spirit in the heart, to feel the ardor that prevented the primitive Church from remaining silent.

To communicate this message, the pope also uses simple language. In his closing speech at World Youth Day in Brazil, he compared the Church to a soccer match. He said we cannot always be on the defensive; we have to rally to attack and win.

“No balconeen,” (do not just watch), the pope says, inventing another word. Do not watch the bulls from behind the barrier; go out and fight the bull. He told young people to “make a mess,” to not remain passive, to make their presence felt inside the Church.

“The Church does not exist so we can be inside an urn, protecting it in a bubble. We have to go out and contaminate ourselves to help change the world and transform it, and for this we need to go out into the peripheries to announce the Gospel,” said Bishop Ruiz Arenas.

The pope also talks about the need for a globalization of welcome, of encounter, of shaking hands, of being charitable and in solidarity with the suffering of others.

Silvia Rodriguez, advisor to the Archdiocese of Miami’s Hispanic apostolic movements, said that Bishop Ruiz Arenas “gave us a much broader and more practical understanding of the encyclical Evangelii Gaudium, so fundamental to the lay people of today.”

From her work, she knows this encyclical very well. “Today, however, I found a very direct blueprint, very applicable to an implementation of what the Church is like, what are the words the pope uses and why he uses them”.

For Carelis Carbajal, of Caminando con Cristo (Walking with Christ) youth ministry at Santa Barbara Church in Hialeah, the topic that most caught her attention was the accompaniment of young people.

“I feel that the Church needs more young priests and nuns, and accompaniment is one of the best ways to have them. To see that experience hand in hand with them and be able to discern whether it is a call from the Lord,” she said.

More events to celebrate the 40th anniversary of SEPI will take place throughout the year 2018 in the different dioceses that comprise the southeastern region of the United States.