'Grandpa the priest' remembered as loving 'spiritual father' at St. Boniface for 18 years

MIAMI | As a parishioner at St. Boniface Parish in Pembroke Pines, Yomaira Díaz said she “grew up thinking that all priests had grandkids.”

That’s because her pastor, when she made her first Communion and confirmation, was Father Antonio Silió, who became a priest after the death of his wife. Elda, the mother of his four children, was 48 when she died. He was 55 when he was ordained.

“He was just like a little grandfather. He would tell you like it is,” recalled Díaz, who now lives in Jacksonville and works for the Diocese of St. Augustine. “He understood certain things about us (kids) because he lived through it.” 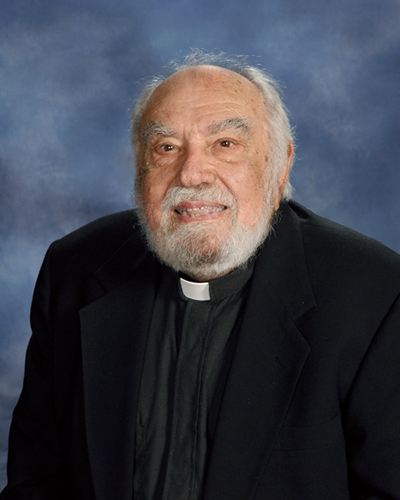 “We all have good memories of Father Antonio. He gave really good hugs,” said Díaz.

A long, 1990 profile in The Miami Herald noted that his grandchildren called him “abuelo el cura” (grandpa the priest). A former parishioner shares that sentiment.

“He was like a father, a spiritual father,” said Patricia Escovar, a member of St. Boniface for the past 22 years. Father Silió served as spiritual director to her and her husband, Dr. Yavir Escovar, who also had been the priest’s doctor for many years.

Speaking for her fellow parishioners, Patricia Escovar said Father Silió “touched the heart of each one of us and established the foundation so that the parish might go on as it has.”

She said Father Silió often referred to himself as having fulfilled two vocations in life: marriage and priesthood. “He had such love in his heart, and he reflected for a while (after his wife died) and said I’m going to give that love to the community,” Escovar said.

In that Miami Herald profile, Father Silió explained his decision this way: “When my wife died, I was lost. I didn’t know what to do with myself. I was just so lonely. I had this love in myself that was burning in my heart. I had to give this love to somebody. Instead of giving it to another woman, I felt compelled to give it to everybody, as a priest.”

The decision surprised his children, all grown by then. But Antonio Silió had first thought about religious life as a 14-year-old in his native Cuba, attracted to the Marist Brothers whose Havana school he attended. His father told him to wait, at least until he was 18.

“But then I discovered girls,” Father Silió told the Herald. “Suddenly, life got very exciting. I used to dance and go to all the parties, I used to drive. I talked a lot. Girls were calling me. I was, I guess you could say, very successful.”

He went on to study law and business at the University of Havana, got married and got a job with Esso Oil, quickly rising through the ranks. When Fidel Castro came to power, he actively opposed him and was arrested. Through family connections, he was freed and came to Miami in December 1960 with his wife and three young children; a fourth was born here.

The early years of exile were hard — “I know what poverty is,” he told the Herald — but soon he was rising through the ranks of Miami construction firms and doing well financially. He owned Rolex watches and Mercedes automobiles, a house with a pool in Kendall, and enjoyed fancy dinners and fine wines.

All the while, he remained deeply involved in the Church. Soon after arriving in Miami, he joined the Cursillo movement, where he worked for many years alongside Miami’s late auxiliary bishop, Agustín Román. He volunteered to work with migrant farmworkers in Fort Myers in the late 1960s. He joined the Movimiento Familiar Cristiano (Christian Family Movement) and Encuentros Conyugales (Marriage Encounters). He served as coordinator of evangelization and gave talks on the sacraments to young people at his parish, St. Robert Bellarmine in Miami. He was a member of the Knights of Columbus, fourth degree.

“He always put himself last. Nothing for himself,” said his daughter, Ana Ortiz. “Everything was for us, his children, his grandchildren, everybody. He was the last card in the deck because he had no need of anything except everyone’s love.”

Father Silió studied for the priesthood in Spain and was ordained April 17, 1988, in Murcia, for the Diocese of Cartagena. After ordination, he taught religion and morality at a school in Murcia while also serving as a hospital chaplain.

He returned to Miami in October 1989 and was named parochial vicar at San Isidro Church in Pompano Beach. He was incardinated — became a priest of — the Miami archdiocese March 5, 1991, and named administrator of St. Joachim Parish in south Dade in June 1992, becoming pastor in September 1993. In February 1995, he was named pastor of St. Boniface, where he remained until his retirement in June 2013.

Father Silió is survived by three of his four children: daughter Ana Ortiz and sons Antonio and Francisco Silió; seven grandchildren and three great-grandchildren, with another on the way; and a sister, Marta Bader. His eldest daughter, Elda, died in 1999.

Funeral services will be as follows, all at St. Boniface Church, 8330 Johnson St., Pembroke Pines: vigil Monday, Aug. 12, 7 to 9 p.m., with prayer service at 8 p.m.; funeral Mass Tuesday, Aug. 13, 10 a.m., with Archbishop Thomas Wenski presiding, followed by burial in the priests section of Our Lady of Mercy Cemetery, Doral.