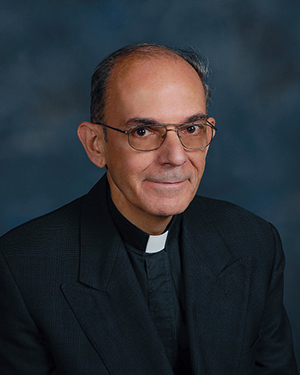 MIAMI | In a roomful of people, Father Jorge García did not stand out. Small in stature, always thin and decidedly an introvert, he tended to work hard and let others do the talking. Among friends, however, he was funny, generous with his time, and a friend for life.

“Truly my best friend,” said Araceli Cantero, former editor of La Voz Católica, who first met Father García back in the late 1970s, when he served as chaplain of the Catholic Student Center at St. Augustine Church in Coral Gables.

She noted that the circle of friends created in those days continues to gather. Now doctors, lawyers and architects, several came to visit the priest in the hospital during his last days.

Father García, 73, died Dec. 19 after enduring a series of illnesses, and ultimately a cerebral hemorrhage. He had retired due to ill health in June 2012, after serving for 16 years as pastor of St. Hugh in Coconut Grove.

But just before his condition became grave, he had a very good week, Cantero said. “He looked great, alert and making jokes about himself. He even went out to dinner with three lifelong friends.”

One of them was Father Pedro Lleó, also a retired Miami priest. The two had known each other since 1964. They had shared an apartment in California while both were in formation for the Piarist Fathers.

“I went to sleep every night to the clacking of the keys of his typewriter,” Father Lleó said, recalling that Father García was finishing his thesis at the time. “Jorge was brilliant. Super intelligent,” he added.

As a person, he was “a good friend, very loyal,” and his hobby was traveling. The two of them visited many countries, including their last trip in 2012 to Cambodia to see the temples of Angkor â long one of Father García’s desires. They also went regularly to the theater and the opera.

Father Lleó said he spent many of his days off at Father García’s parish, because “for him, the chief virtue was hospitality. Receiving each guest as if he were Jesus.”

Cantero worked with Father García during the two years (1982-1984) that he served as director of La Voz, the Spanish archdiocesan newspaper. She views him as “a great administrator. He left the parishes entrusted to him in very good shape.”

Perhaps less known, except to his parishioners, was the fact that Father García was a scriptural scholar and “excellent preacher. He always evoked an interior restlessness and a desire to be better,” said Cantero.

She noted that in 1998, Father García took a three-month sabbatical during which he traveled to the Holy Land, “to experience the places he spoke about in his preaching.” He also wrote a series of articles for La Voz in the 1990s under the theme “the pilgrimages of Jesus.” 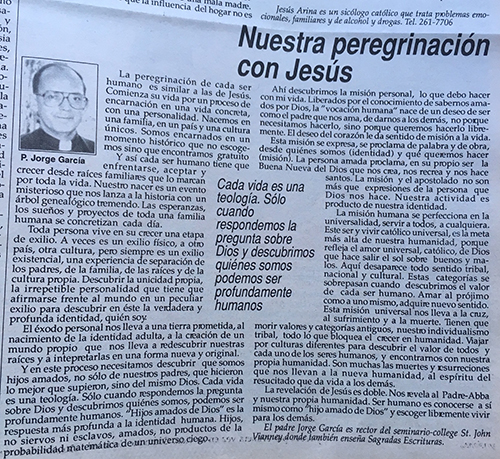 This is the final column Father Jorge Garcia wrote on the theme of "the pilgrimages of Jesus" for La Voz Católica. It was published Aug. 19, 1994.

Born in Havana, Cuba, Feb. 25, 1945, Father García was the youngest of two sons. He studied in elementary and secondary schools operated by the Piarist Fathers in Cuba before leaving the island with his brother via Operation Pedro Pan. They spent some time alone until their parents arrived and the family settled in Miami.

Shortly thereafter, the young García entered the Piarist novitiate in Derby, New York. He obtained a degree in chemistry and philosophy from the Catholic University of America in 1968. He also obtained master’s degrees in theology and divinity from St. Albert’s College (Graduate Theological Union) in Berkeley, California, in 1973 and 1974, respectively. In addition to fluency in English and Spanish, he understood Italian and German.

He was ordained a priest for the Piarist community June 23, 1973 at St. John Bosco Church in Little Havana by Miami’s then auxiliary bishop, Rene Gracida.

Father García taught at St. Bernard High School in Los Angeles, California, from 1973 to 1975, and spent his summers serving at St. John the Baptist Church in Fort Lauderdale.

“A good son, in order to take care of his parents he had to leave the Piarist community he loved,” said Cantero.

From then on, in June 1975, he began serving in the archdiocese and was incardinated â made a Miami archdiocesan priest â Oct. 21, 1981.

From 1975 to 1976 he taught at Cardinal Gibbons High School in Fort Lauderdale. He served in campus ministry at the University of Miami, and as parochial vicar at St. Augustine Church, from 1976 to 1979.

He then served as an advocate at the Metropolitan Tribunal from 1977 to 1984, while also serving, from 1979 to 1982, as parochial vicar at St. Agatha in Miami and campus minister at Florida International University, which is located across the street from the church.

He was named associate director of religious education for the archdiocese in 1982 and director in 1983, a position he held until 1986. Throughout those years, he lived and helped at Sts. Peter and Paul Parish in Miami.

From December 1985 to March 1986, he served as temporary administrator of St. Kevin Church in Miami. After that he was appointed administrator, and later pastor, of St. John the Apostle in Hialeah, where he served from 1986 to 1992. He also served as chaplain to the Catholic Educators Guild from 1985 to 1987.

In 1992, he joined the faculty of St. John Vianney College Seminary in Miami and was named rector in 1993. He remained rector until 1996, when he was appointed pastor of St. Hugh.

Upon hearing last Saturday that his dear friend was in grave condition, Father Lleó said he headed to the hospital to anoint him. On the way, he tuned the radio to a station that played only Christmas carols. The first one he heard was “I’ll Be Home for Christmas,” followed by “God Rest Ye, Merry Gentlemen.”

“As a man of faith, I told myself, ‘Here’s a message,’” Father Lleó recalled.

In the last of his “pilgrimage” columns, Father García wrote: “Each life is a theology. Only when we respond to the question about God and discover who we are can we become profoundly human.”

Cantero considers it a fitting epitaph for the priest and friend she knew. Despite the sadness of his absence, she is happy for him, she added. “For sure, he will have the best Christmas of his life.”

Father García is survived by his brother Carlos, sister-in-law Julie, and nieces and nephews Carla, Claudia, Carlin and Danny.

This article has been modified, and more information has been added, since its original posting.