Father Chabebe died Dec. 8 at the age of 92. He had been a priest for 68 years and ministered in South Florida since 1961. 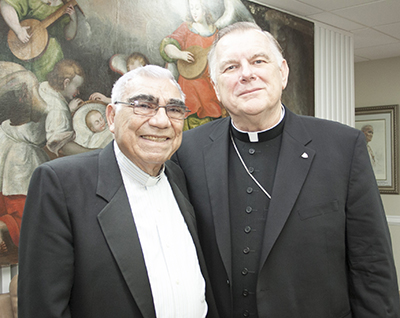 Father Jorge Bez Chabebe is pictured here with Archbishop Thomas Wenski during a visit to the Pastoral Center in 2014. Archbishop Wenski wrote the prologue to Father Chabebe's autobiography, "Dios Me Hizo Cura" (God Made Me a Priest).

Retired since 2003, he had been helping most recently at St. Raymond, where Archbishop Thomas Wenski will celebrate the funeral Mass tomorrow at 10 a.m. The vigil will take place from 7 to 10 p.m. tonight, with a prayer at 8 p.m., at the church, which is located at 3475 S.W. 17 St., Miami.

Archbishop Wenski wrote the prologue to Father Chabebe’s autobiography, “Dios Me Hizo Cura” (God Made Me a Priest), which was published in 2014.

“In the early days of the Cuban revolution he would pray for those condemned to die before they were shot by the firing squad,” Archbishop Wenski said. “In the early days of exile, he was on TV and radio,  and sponsored the ‘Añorada Cuba’ shows at Dade County Auditorium.”

In the prologue to another book, “Mis Poesías” (My Poems), Father Chabebe described “Añorada Cuba” as “a musical and patriotic message tuned to the love of God and our unforgettable homeland: Cuba.”

Through “Añorada Cuba,” Father Chabebe hoped to instill knowledge and appreciation of Cuban culture, music and the arts among the U.S.-raised and -born children of the exiles.

Born in Banes, a city in the province of Holguin on the eastern side of the island, Father Chabebe was the son of Lebanese immigrants. He studied at the Seminary of San Basilio Magno and was ordained March 26, 1950 for the Archdiocese of Santiago de Cuba.

He arrived in Miami Aug. 30, 1961, having left the island after experiencing conflicts with the communist government of Fidel Castro. Here, he began working with Cuban refugees being housed at a base in Opa-Locka, and those who sought help at the Centro Hispano Católico in downtown Miami.

From 1962 to 1963, he served as chaplain at Camp Matecumbe in Kendall, one of the shelters for unaccompanied Cuban minors who were airlifted to Miami via what became known as Operation Pedro Pan. From 1963 to 1966, he served as parochial vicar at Immaculate Conception Church in Hialeah, and from 1966 to 1971 at St. John Bosco in Little Havana.

He spent a year studying English at Georgetown University in Washington, D.C., before returning to Miami in 1972 and being assigned as parochial vicar at St. Robert Bellarmine (now a mission of Corpus Christi Church in Miami).

For many years after 1973, he held no official assignment with the Archdiocese of Miami, but continued to serve as a priest, especially among his beloved Cuban exiles. His last official assignment was in February 2003, when he was named parochial vicar at San Lazaro Church in Hialeah. He retired from there in August of that same year.

Since then, as his health permitted, he helped at St. Raymond as well as St. Michael and other parishes in Miami and Hialeah. He also celebrated Mass on the airwaves of the archdiocesan station, Radio Paz 830 AM.

The description of his autobiography on the Amazon website says, in part: “He has consecrated his life to ministering to the Cuban community in the United States, and to anyone who needed a helping hand. Father Chabebe himself says he prefers ‘the cathedral contained in each person.’

“The book weaves his â¦ years of life with the history of the Cuban revolution and exile, but above all illustrates how the thread of God’s loving hand has been at the center and origin of his mission and his life.”