Amid repression, Nicaraguaâs Church walks with its people 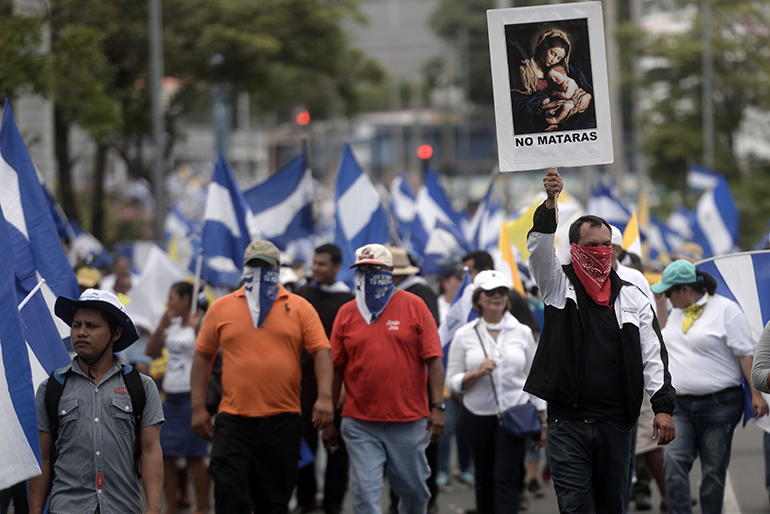 Anti-government demonstrators hold a religious image reading "You shall not kill" as they take part in a pilgrimage in Managua on July 28, 2018. Thousands of Nicaraguans marched in support of the episcopate, accused by the government of being in favor of a coup, in the framework of protests which have been taking place since April and in which over 300 people were killed.

MIAMI | Since demonstrations against Nicaragua’s government began last April, the Catholic Church has walked alongside its people.

In addition to serving as intermediaries in negotiations with the government aimed at finding a way out of the crisis, bishops and priests have opened their churches to shelter the persecuted and tend to the wounded. They have risked their lives by remaining in areas under attack from the police and paramilitary groups. And they have marched on the streets to demand the release of those who were detained.

On July 9, the apostolic nuncio to Nicaragua, Archbishop Waldemar Stanislaw, Managua’s Cardinal Leopoldo Brenes, and Managua’s Auxiliary Bishop Silvio Baez, along with several other bishops and journalists, were attacked by masked paramilitaries in the Basilica of San Sebastian in Diriamba, 26 miles south of Managua. They were trying to mediate the release of a group of nurses and Franciscan missionaries as the church was under siege by paramilitaries.

After the attack, which resulted in the bishops being punched and scratched, a church in Jinotepe was desecrated and its priests attacked.

The Church in Nicaragua “is being persecuted, no doubt about that,” said Father Elvis Gonzalez, a native of Nicaragua who serves as vocations director for the Archdiocese of Miami. He added that the persecution is against the Church in general, from bishops to priests to laity.

One of the largest attacks took place July 13 in the Divina Misericordia parish, where students from the Universidad Autónoma de Nicaragua sought refuge after being expelled from their place of studies by riot police and paramilitaries. The students had been entrenched at the university since the protests began. Journalists and priests also were present in the church when the paramilitaries, who were armed, attacked the students.

“The church was destroyed. You can even see many bullet holes in the painting of Divine Mercy. It was striking,” said Father Gonzalez.

Two of the young people died. Later that night, some of the more gravely wounded and a journalist were evacuated.

The next day, the apostolic nuncio and Cardinal Brenes, accompanied by representatives of human rights organizations and other international groups, arrived with ambulances and a bus full of humanitarian assistance. They took the refugees to the cathedral, where their relatives reached an accord with the police. Cardinal Brenes put the blame on the government.

For his part, Nicaragua’s president, Daniel Ortega, told international news organizations that no priests had been persecuted and denied that any attacks had occurred in the churches. On July 21, the 39th anniversary of the Sandinista revolution, he accused Catholic leaders of inciting people to violence and trying to overthrow the government.

He also said Nicaragua was at peace and those participating in protest marches were terrorists. He accused the United States of backing a coup attempt.

“He enacted an antiterrorism law through the legislature, which has been his accomplice, and is calling priests and young people terrorists,” said Father Gonzalez. “Until when is this alleged calm supposed to last? I say alleged because he is governing through repression, violence and intimidation.”

On July 29, Nicaraguans, convoked by representatives of civil society, turned out by the thousands for a march in Managua in support of Catholic leaders. They asked for a dialogue to prevent more violence. Similar marches have taken place in other parts of the country.

Shortly after the start of the protests, the Nicaraguan bishops’ conference agreed to mediate a dialogue, which remains stalled because the Church’s conditions have not been met: an end to the repression against the protesters; the exit of Ortega and his wife, Vice President Rosario Murillo; a call for elections to take place no later than March 2019; and reforms to the constitution and electoral courts to guarantee free and democratic elections.

Ortega has said he will not move up the elections and plans to remain in power until his term ends in 2021. At the same time, an increasing number of Nicaraguans are fleeing the violence by going to neighboring countries such as Costa Rica, Panama and the United States.

The protests began when Ortega’s government announced reforms to the retirement system which would have decreased the pensions of retirees and increased the contributions of workers. The protests were repelled with rubber bullets and tear gas. Pro-government groups such as the Sandinista Youths also hit the streets to attack protesters and journalists, increasing the violence and repression.

According to the Interamerican Commission on Human Rights, the death toll so far is around 450, mostly young people, who died in confrontations with the police. Ortega’s government says the figure is less than 200.

His administration also has been accused by the human rights commission and other international organizations of committing “grave violations of human rights,” including illegal and arbitrary detentions, extrajudicial killings, possible acts of torture, censorship and attacks on the press and other forms of harassment.

According to experts, this is the worst crisis Nicaragua has faced since the civil war 30 years ago.

The Nicaraguan bishops have received unconditional support from Pope Francis and other Latin American bishops’ conferences. Through social media, Archbishop Thomas Wenski has expressed his support for the Nicaraguan people. Those living in Miami have gathered at area parishes to pray for peace in their homeland.

“Nicaragua is submerged in uncertainty, but at the same time it is much more convinced that dawn is approaching,” said Father Gonzalez, who keeps in touch with family members and priest friends in his homeland. “People are afraid and feel the impotence of not being able to do anything else. They also have a lot of hope and a great desire to face any reality that comes their way.”