Dozens with unusual vocation gather in Miami, told they are instruments of the Lord 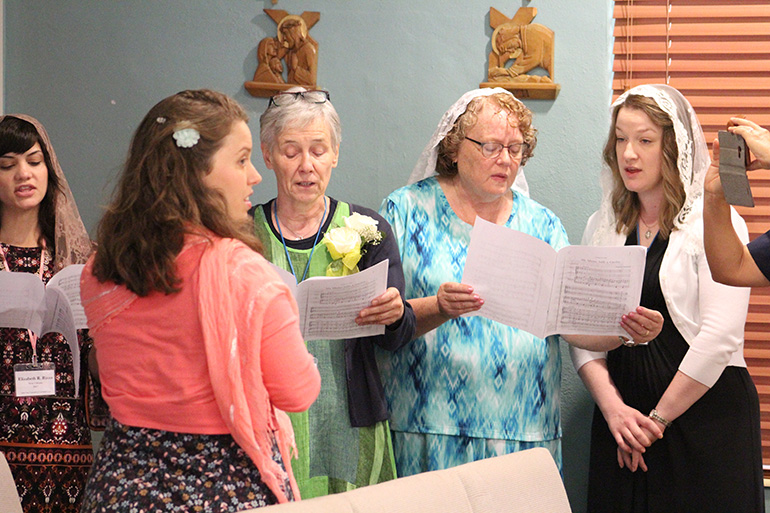 MIAMI | For many Catholics, the title “virgin” goes with Mary, the Blessed Mother, the one and only.

Sure, priests and religious practice celibacy and chastity, and that’s expected. But most people in this sex-obsessed culture, including Catholics, are shocked to learn that “consecrated virgins” exist in today’s world, working and living in society, not outside it. 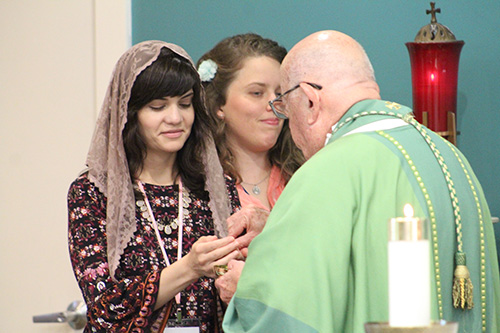 Elizabeth Rizzo, a consecrated virgin from New Orleans, receives Communion from Archbishop John Favalora. Next to her is Claire Halbur. 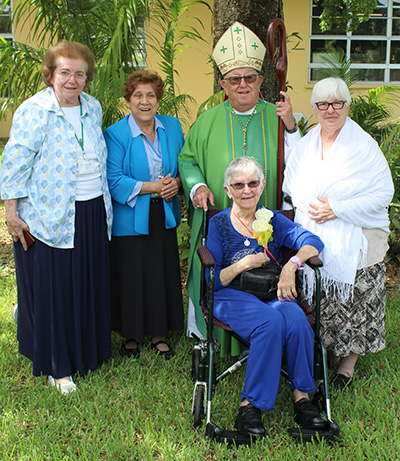 The consecrated virgins from the state of Florida pose with Archbishop Emeritus John Favalora; from left: Nancy Dvorak of the Diocese of St. Augustine, and Magalis Aguilera, Kathleen Danes (seated), and Maria de Los Angeles Exposito, all from the Archdiocese of Miami. 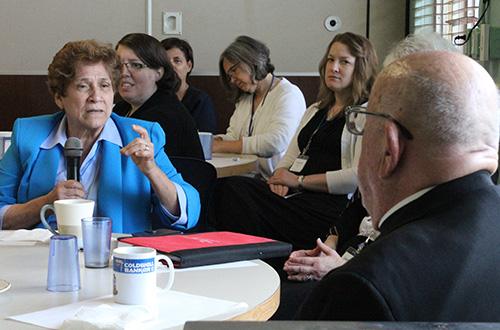 Pauline Garland is one of them. An archivist and librarian from the Archdiocese of Sydney, Australia, she has been a consecrated virgin for 25 years. When she worked in a naval base, sailors, mariners, and submariners questioned her about the ring she wore, which all consecrated virgins receive at their Rite of Consecration.

“The ring drew people in, and they’d say, ‘There’s something about you. Who are you? What do you do?’ I would say I’m a consecrated virgin, and immediately they would ask, ‘Oh, what’s that?’ Those who were unaware of my celibacy would ask ‘Haven’t you found a fellow yet?’”

Garland spent July 6-10 in Miami, and she was not alone. She and 28 others, plus two candidates, gathered at MorningStar Renewal Center in Pinecrest for the 2018 United States Convocation of Consecrated Virgins. Participants ranged in age from late 20s to late 70s and represented 16 states and six countries, including Australia, Austria, El Salvador, Germany, Goa, and the U.S. Four of the women are from Florida, including three from the Archdiocese of Miami.

“We don’t have a lot of opportunity to get together because people live this individually in their own diocese,” said Judith Stegman, a consecrated virgin from the Diocese of Lansing, Michigan. She made her vows 25 years ago and now serves as president of the United States Association of Consecrated Virgins. “People love it when we have the time to be together. This is the first time in Miami, and we have had such a warm welcome.”

The convocation gave participants the opportunity for spiritual growth through prayer, presentations and panels, as well as opportunities to bond and sightsee. Different bishops and priests celebrated their daily Masses, including Bishop Earl Boyea of the Diocese of Lansing, episcopal liaison for the USACV; Miami Archbishop Emeritus John Favalora; Auxiliary Bishop Peter Baldacchino (read his homily here); and Father Fernando Heria, rector of Our Lady of Charity National Shrine in Miami.

Archbishop Favalora, who celebrated the Mass July 8 at MorningStar, spoke about the prophetic role of consecrated virgins, as expressed in their way of life.

“In the 2,000 years of the Church we see the prophetic role of Jesus calling individuals time to time, place to place, in this circumstance and that circumstance, to be the voice of God speaking and continuing to reveal himself to his people and all throughout history,” he said.

He pointed out that religion, and even acknowledging God in daily life, are a struggle for people living in today’s secularized and sexualized world. Consecrated virgins are living signs that there is more beyond what popular culture can offer.

“You have professed yourself to Christ and to the Church. That is a mystical union. It is the farthest thing possible from the here and now. Very few people think of that, but there are little signs when people meet you and find out who you are. And then for those whom the spirit is touching, they wonder why? What would motivate people to do that? They can’t understand it. You’re puzzlement, but it makes them think. And through you God grabs their attention,” Archbishop Favalora said.

Garland’s experience certainly proves that. She also witnesses to her consecration by keeping her attire modest, simple, and feminine. “As a consecrated person I think a lot about my clothes. I come from Australia where clothes â the less the better, where we have beach culture, but I even have religious sisters come to me and ask me where I buy my clothes.”

In addition to the ring, at the Rite of Consecration virgins receive a book of the Liturgy of the Hours and a veil â a bridal symbol not intended to be worn every day. But at the bishop’s discretion it can be worn at Mass. 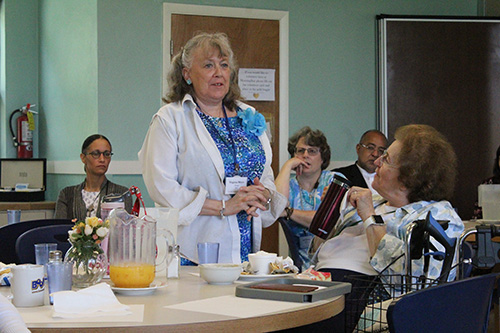 Virginia Meyer, a consecrated virgin from Chicago, asks Archbishop John Favalora how she can reach out to her bishop better. 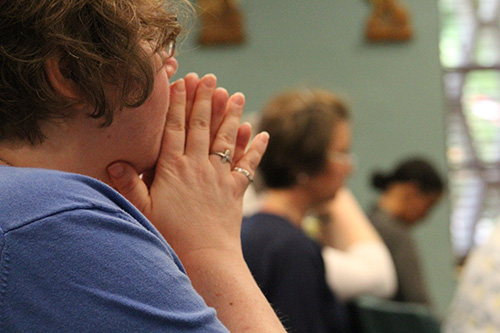 A consecrated virgin prays during Mass July 8 at MorningStar Renewal Center in Pinecrest. 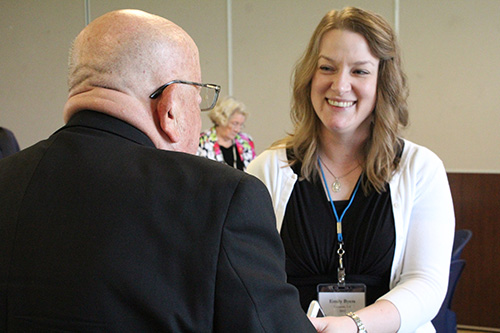 Consecrated virgin Emily Byers from Lafayette, Louisiana, shares a laugh with Archbishop Emeritus John Favalora, who was born and raised in New Orleans.

That’s what Dr. Linda Ann Long does. She’s a cardiologist who was consecrated in 1995 in the Archdiocese of Minneapolis-St. Paul.

“I knew that this was the original version of taking the veil, but it would be very difficult in my work to wear a veil in the hospital. So Archbishop [Harry] Flynn asked me to wear it at church,” Long said.

The three consecrated virgins in the Archdiocese of Miami include Maria De Los Angeles Exposito, a former realtor consecrated by Archbishop Favalora in 2006. She founded the Cenaculos Contemplativos de la Divina Misericordia (Contemplative Cenacles of Divine Mercy) and has traveled to South and Central America, Spain and various U.S. states.

Cuban-born Magalis Aguilera, a clinical psychologist, was consecrated in 1986 in Puerto Rico by Cardinal Luis Aponte Martinez. She moved to Miami in 1992 and works in private practice, mainly with children and families. She serves as vice president of the USACV and helped organize this year’s convocation.

In 2003, Kathleen Danes was the first woman to become a consecrated virgin in the archdiocese. She continues to pray for the intentions of the local Church, even after a stroke slowed her down.

“God never sends you more than what you can handle,” said Danes. “If nothing else it’s been a learning tool, but I miss [church work] a lot. I was at the church seven days a week, I opened, and I closed it.”

After 15 years of joyful consecrated virginity, she offered this advice to those who might be intrigued or discerning the call: “To be a consecrated virgin, you’re going to want to have the best lover you could ever have, and that is the Lord. That’s why we do it, to marry the Lord.”