'I don't have any physical limits' 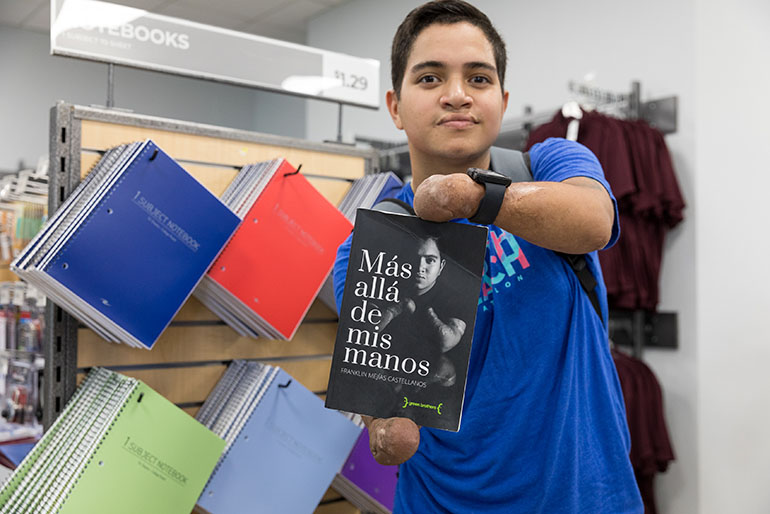 St. Thomas University student Franklin Mejias Castellano, who was left handicapped by an infection acquired during a trip to Florida from his native Venezuela when he was 12, holds a copy of his book, which tells the story of his overcoming the loss of his limbs following the infection.

MIAMI | When asked how many surgeries he has had since contracting a deadly bacterial infection more than a decade ago, 21-year-old Franklin Mejias Castellano must pause and think for a moment.

“Twenty-five,” answered the young man, who recently completed his first year at St. Thomas University, where he is studying business. He easily navigates both virtual learning and the physical college campus despite being a quadruple amputee, after a 2011 brush with meningitis that left him hospitalized for nearly a year. 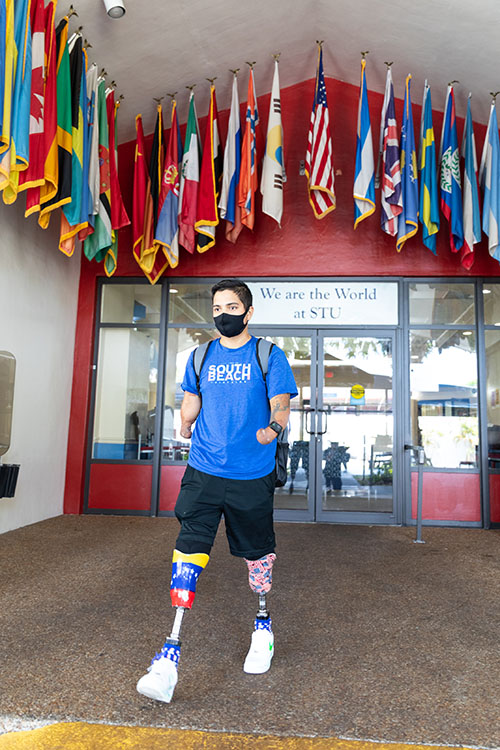 St. Thomas University student Franklin Mejias Castellano, who was left handicapped by an infection acquired during a trip to Florida from his native Venezuela when he was 12, walks through the university campus in May 2021.

A week into his first-ever trip to the U.S. from his native Venezuela, which was to include stops in Miami and Disney World, the youngster complained to his father that he wasn’t feeling well. At the time, he was enjoying Miami Beach. In short order, he couldn’t walk and he couldn’t open his eyes. His father and sister brought him to a hospital in Aventura, where the doctors realized Castellano had a serious infection that required specialized intervention. He was transferred to Joe DiMaggio Children's Hospital in Hollywood.

“I don’t remember anything after that for a number of days because I was in an induced coma and woke up at the Joe DiMaggio Hospital,” he said. “I didn’t understand what was happening to me. My hands and my feet were completely black.”

Due to complications from the infection, on Nov. 11, 2011, a team of doctors amputated Franklin's hands and feet in a bid to save the then-12-year-old’s life. Where the bacterial infection came from remains a mystery.

“Actually, we don't know. The only thing we know is the bacteria caused meningitis,” said Castellano, who now lives with his older sister, Franny, in order to commute to St. Thomas University.

“After that, my life changed physically and mentally and now I see life completely differently — and I have the opportunity to show people that anything is possible,” he said, noting that he has written not one but two books dealing with his life hurdles and lessons learned.

“I don’t have any physical limits: I drive a car, I run, I swim, I can do anything. That is the message that I am giving everyone who follows me or sees me and is something I want to take to another level.”

He credits his adopted country of America for providing him with healthcare and professional opportunities probably not available in his native South America. With the support of his father and sister, he completed middle school and high school in the Hollywood area. 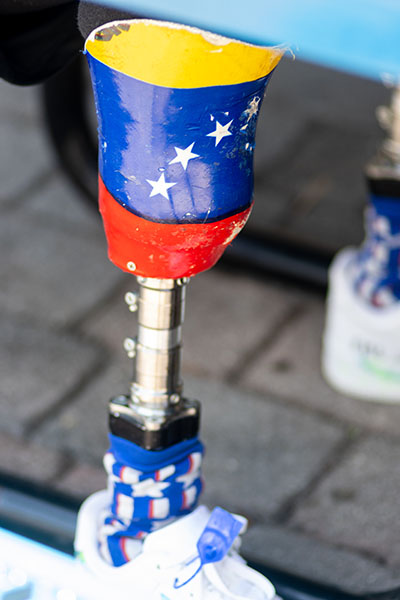 St. Thomas University student Franklin Mejias Castellano, who was left handicapped by an infection acquired during a trip to Florida from his native Venezuela when he was 12, has decorated his prosthetics with the Venezuelan and American flags.

“Starting here from scratch was difficult, but the most important thing was that we were together (as a family). We focused on one day at a time and here we are as part of this society, and we feel very happy about that,” he said.

Unsure what to do after high school, Castellano took some time to work and write his books, but a chance encounter with an admissions professional resulted in an application to St. Thomas University, which he said was a good fit in terms of its mission and vision statements.

“I really identified with the university,” he said, noting that he hopes to graduate with a business degree in 2025.

Meanwhile, he and his father own and operate a food truck business based in Hollywood. In his free time, he competes in marathons and other athletic events.

His first book, written in Spanish and titled “Beyond My Hands,” tells the story of his illness and recovery. He is now putting the finishing touches on a book with a broader focus on his outlook on life.

“I see myself in five years traveling to different states, telling my history and motivating everyone,” Castellano said. “I love business and all of that. I know that the business field is not easy but offers things that I like, and I want to be a motivational speaker for everyone who needs it.”

Castellano almost fails to mention the pandemic year, and the fact that he and his immediate family all had a bout with COVID-19. In his case it was serious enough to put him in the hospital for a week, but he has made a full recovery.

“Franklin has the best attitude on campus and it's wonderful," said St. Thomas University President David A. Armstrong. “He is an example for all of our students. We all have tough days and obstacles to overcome. Yet, when you see Franklin bounding across campus, carrying all of his books, doing all of the things he has to do to succeed with a huge smile on his face, it completely changes your day.”