Students, principal Lisa Figueredo (middle left) and pastor, Father Alejandro Rodriguez Artola (rear right)pose amid the Blue Ribbon sign on the lawn of St. Thomas the Apostle School in Miami, which was one of two archdiocesan schools honored by the U.S. Department of Education in 2020.

MIAMI | As Lisa Figueredo became principal of her alma mater, St. Thomas the Apostle School, in 2005, she encountered an old folder with their application to become a National Blue Ribbon School of Excellence. While round one didn’t take them all the way, Figueredo set a new goal for round two as part of her vision for proactive growth and achievement.

“When you’re in college studying education and you hear of National Blue Ribbon recognizing school excellence, I knew that was something I wanted,” said Figueredo.

Forty years after entering kindergarten at St. Thomas, and 24 years after joining as a teacher, Figueredo received the coveted email in June that the school was among the 2020 award recipients — but had to keep it quiet through summer.

“The email was not in so many words because they try to reserve it for the secretary (of the U.S. Department of Education). We were like ‘it looks like we got it!’” she recalled. “We screamed. We did a big group call.”

St. Bonaventure in Davie and St. Thomas are the first archdiocesan schools to earn the honor since Msgr. Edward Pace High School in 2002. Four other Miami-Dade and Broward schools were among 317 public and 50 non-public recipients nationwide in categories of either "exemplary high performing" or "achievement gap closing" schools. 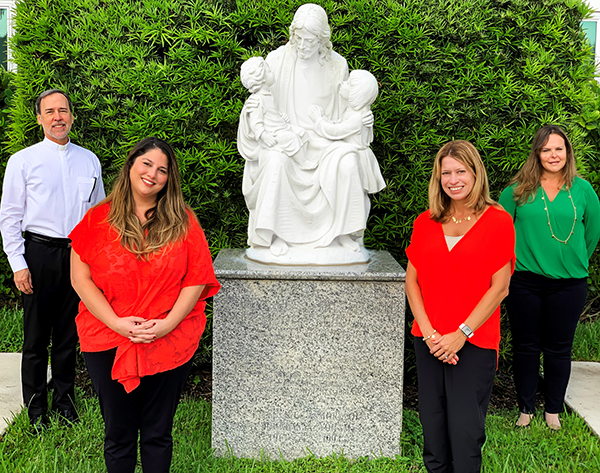 Posing near a statue of Jesus and the children on the campus of St. Thomas the Apostle School in Miami, from left: Father Alejandro Rodriguez Artola, pastor; special education teacher Nichole Aranguren Garcia; principal Lisa Figueredo; and vice principal Angie Ayan-Novo. St. Thomas was named a 2020 Blue Ribbon School of Excellence by the U.S. Department of Education.

Both St. Thomas and St. Bonaventure earned the "high performing" distinction. According to Figueredo, that means they had to rank in the top 15% in standardized tests. The principal analyzed scores and student progress each year with teachers. Now she says she’s beyond proud of the hard work of her teachers, administrators, students and parents.

“I have the incredible blessing of leading an amazing community," she said. "I’m very happy that the parents are reassured that this is an academically challenging and vital school.”

“We know what we do here is for the glory of God. It’s solid, it’s blessed," said St. Thomas' pastor and alumnus, Father Alejandro Rodriguez Artola. But, he added, to have that confirmed by the U.S. government "is a whole other level of affirmation.”

Father Rodriguez Artola, who first considered priesthood at St. Thomas’ daily Mass in second grade, said, “We’re giving this formation to our children and at the same time we’re offering this incredible academic achievement. But the academic achievement does not mean anything — like Corinthians 12 — if there isn’t love. Without that love, love of God and love of neighbor, this wouldn’t make any sense.”

Vice principal Angie Ayan-Novo, who compiled data with help from parent Lisette-Rodriguez-Diaz, described the school’s authentic Christian spirit. “We have the scores, our students work very hard, our teachers are very good at performing and elevating our students. But then we have this component of the community that brings everyone together and supports us, cooperates in achieving these goals,” she reflected. “We have good people, good vision, good fortitude.”

During the painstaking two-month application process, special education teacher Nichole Aranguren Garcia wrote a final essay response at school one Sunday at 9 p.m. The next day she prayerfully scrapped her first response to write about that caring spirit that sets the school apart. But her prayers weren’t about victory.

“Every time I would sit down, I would just pray and say, ‘God if this is yours, if this is meant to be, fantastic, we’ll take it. But at the end of the day we’re just so thankful for what you’ve given us.’ I’m so thankful to be part of this community,” Aranguren Garcia said.

Eighth grader Isabel Caceres said she already knew she was receiving a Blue Ribbon education. Dropping by from history class, she praised the many advanced classes offered that push her further, and service opportunities that “make you want to help more.”

“I’m going to miss the teachers. They’ve definitely had an impact on my life, “she said. “This school has taught me to be hard working.”

Aranguren Garcia embraces the growth challenges — some more welcome than others. “If you get too comfortable you don’t grow, and I think every year we’re challenged to grow more. So since March a lot of growth has occurred," she noted.

The school even embraced the challenge of re-starting in-person classes amid the pandemic, said the 21-year veteran. "We were like let’s do this, make it happen, give these kids absolutely 100 percent.”

Father Rodriguez Artola, who became pastor in 2013, acknowledged the excellent groundwork of the late Father Daniel Kubala, who served the community over 23 years. Beyond that, he called Figueredo "a visionary" who has always "aimed to see what is the next thing we can do to further and better this whole system" — meaning the pastoral, spiritual, academic, and personal formation of the children. “Stagnant waters do not produce energy,” he said.

“We’re going to certainly keep up the Blue Ribbon standards, our goal is to continue with those scores. Even though it’s a lifetime award they do encourage you to apply every five years,” Figueredo said. And beyond that, “we are striving to get our children to heaven and to do that we need to raise globally aware, conscientious, responsible and kind citizens who will make tomorrow a better place.”