Served in Miami as principal, schools superintendent, blogged about his 'journey to death' from ALS

MIAMI | Brother Richard DeMaria, who chronicled his “journey to death” in monthly letters to his friends, fellow Edmund Rice Christian Brothers, and in the archdiocese’s Let’s Talk blog, has died.

The former archdiocesan superintendent of schools and director of the Office of Faith Formation (1998-2010) died peacefully June 20 at St. Cabrini Nursing Home in Dobbs Ferry, New York. His sister, Joann Mulqueen, shared the news via email with the same group he had emailed since being diagnosed with ALS — also known as Lou Gehrig’s disease — in 2016. 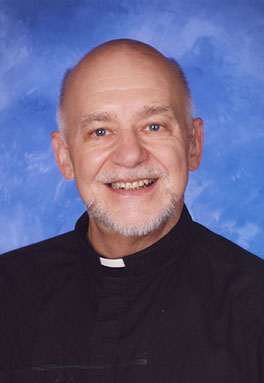 “There was no trauma or drama, he simply passed peacefully,” Mulqueen wrote. “He had remained in good spirits, was still eating, and receiving many, many visitors. He continued to be able to communicate with smiles, his eyes, and shaking his head in response to questions,” she noted.

Those who knew him recalled his gentleness, his ever-present smile and his brilliance. He held degrees in science, counseling and education management as well as a doctorate in theology, and he frequently contributed articles to learned journals.

His profound commitment to Catholic education, and especially education of the poor and marginalized as the only means to “change the world and change people,” brought him to Miami in 1993 to serve as principal of Archbishop Curley-Notre Dame, a struggling inner-city high school with a storied past and an uncertain future. (It merged with Msgr. Edward Pace High School in 2016.)

In 1989, he had left the “ivory tower” of Iona College in New Rochelle, New York, where he had served in various capacities, including provost, for 18 years, to work with migrant farmworkers in the Diocese of Venice, Florida.

After his time as superintendent here, at the age of 68, he became a missionary, working with the Christian Brothers’ houses of formation in South Africa and Kenya, where he had “a major impact on the formation of the young men joining our congregation in Africa,” according to fellow Christian Brother Patrick Sean Moffett, who succeeded Brother Richard as principal at Curley-Notre Dame.

Brother Richard explained his decision to go to Africa this way: “I realize that I have become used to living a life of comfort, thanks to the generosity of others. I realize as well that I have also become used to having influence. To live in a place where I will have no position or influence or importance and where many comforts will not be available to me will be difficult, to be sure...

“I look forward to this, not because I am a masochist but because I am a Christian who believes that new life always comes after death. At this point in my life, I need to be stretched, disoriented, broken-down, so that a new strength and wisdom can emerge. I am hopeful that my experience as a ‘stranger in a strange land’ will result in a person who has a greater ability to wonder at beauty, truth and the good. I am eager to begin undergoing this pruning process.”

He used similar words in describing his approach to his illness. In the Let’s Talk blog where he first spoke about his ALS diagnosis, he wrote:

“What amazes me is how calm I am about the prospect. This calmness is not the result of ignorance of how this disease slowly but inevitably takes away all one’s abilities until one dies... What produces this calm in me? My faith in the saying that God never sends us a cross without the grace to bear it. My experience in life has always proven that to be true, and so I am confident that somehow or other I will develop, late in life, the humility to accept the certain loss of strength and abilities that is inevitable. I also hope that this will lead me to a deeper experience of unity with my God of surprises.”

“He graciously accepted his illness,” said fellow Christian Brother Jim DePiro, who lived with him in Miami for 10 years. “(I) admired how he gave up his position at Iona and moved to the margins at Bonita Springs (Florida) ... One of his greatest attributes was his ability to laugh at himself.”

Hope Sadowski, administrative assistant in the Office of Schools, who worked with Brother Richard throughout his 12 years as superintendent, shared the news of his death in an email to archdiocesan principals and Pastoral Center employees.

“I was privileged to receive these blogs which were full of spiritual messages of someone whose faith carried him during this time,” Sadowski wrote. “He is now finally at peace and has all the answers (to his questions) during this difficult time.”

Brother Richard was born June 25, 1942, in Wadsworth, Ohio. He entered the juniorate of the Edmund Rice Christian Brothers in August 1958, the novitiate in 1960, and professed his first vows in September 1961.

In 2019, his blogs about living with ALS were awarded third place among blogs by religious/clergy by the Catholic Press Association of the U.S. and Canada. In 2010, he received the Lumen Christi (Light of Christ) award given by the Catholic Educators Guild of the archdiocese.

The wake for Brother Richard will be held Friday, June 25, from 2 to 7 p.m. at the Graham Funeral Home in Rye, New York. The funeral Mass will be celebrated Saturday, June 26, at 10:30 a.m. at the Church of the Holy Family in New Rochelle. Burial will follow at the Christian Brothers Cemetery in West Park, New York.

In addition to his sister Joann Mulqueen, he is survived by two other sisters, Betty Jane Sobon and Sister Gail DeMaria, of the Congregation of the Sisters of St. Joseph of Peace; Mulqueen’s husband, John; five nieces and nephews; and six grandnieces and grandnephews.

This article has been edited to correct Brother Richard's place of birth. It was not New York but Ohio.

Carlota E. Morales Ed. D. - 06/23/2021 07:34 PM
It was with a heavy heart that I received the news that Brother Richard had passed away, A myriad of good memories came into my mind as I clearly remembered his tenure as superintendent of schools. I especially recall his spirit of service to those who needed him. He was instrumental when we first established the Padre Pio Program at St. Agatha School. His commitment to those who needed him was well known to all. You will always be remembered for your compassion to all. May you rest in peace. Carlota E. Morales, Ed. D. Retired principal

FRANK Sherlock - 06/23/2021 01:03 PM
Thank you so much for this touching reminder about the heart and soul of this wonderful man. He was deeply touched by his years in the Miami diocese. This is a fitting tribute to a man who continued to grow in his love of God through his illness. His blogs were an inspiration for those of us who received them.