'Look, there goes the Church' 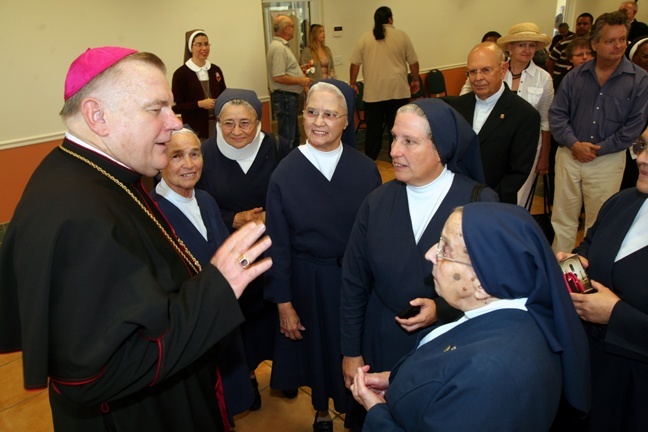 Archbishop Thomas Wenski chats with members of the Daughters of Charity after the Mass.

MIAMI â Your consecrated life is a gift to the Church, Archbishop Thomas Wenski told Carmelites, Dominicans, Franciscans, Sisters of St. Joseph, Daughters and Missionaries of Charity, Servants of the Pierced Hearts of Jesus and Mary, Nigerian nuns and Christian Brothers at the last of several âwelcomeâ Masses, this one dedicated to members of religious orders.

âThank you for who you are,â he said in his homily. âYou vowed to live the evangelical counsels of poverty, chastity and obedience.â

Archbishop Wenski added that all the baptized are called to discover in Jesus the ultimate meaning of human existence. However, religious have a special calling.

âLike those chosen disciples, those whose baptism has developed into a radical response to follow Christ, have a special experience,â he said. âYou âconsecratedâ are the Churchâs âconcentratedâ. You, too, can say, how good it is for us to be with you, Lord, to devote ourselves to you, to make you the one focus of our lives.â

Today, religious life is a contradiction of the secular world, he said.

âWhen so much of society lives as if God doesnât matter, itâs not surprising that your embrace of your vocation is viewed by many with skepticism, even ridicule,â he said.

The archbishop gave an example of how religious life is at the heart of the Church.

âThe other day, I was reviewing a video on religious life,â he said. âA nun was walking in a city when a little girl saw her and said to her mother, âMommy, look, there goes the Church.â For that little girl, the nunâs religious habit was an iconic representation of the Church.â

Following the Mass, the archbishop greeted the religious individually and posed for pictures with them. Some took group photos with him, like the 25 sisters from the Servants of the Pierced Hearts of Jesus and Mary.

âThe Holy Spirit made a good choice,â said Sister Marie Jose Socias, a member of the archdiocesan community. âWe are happy to have a shepherd that loves those in religious life.â 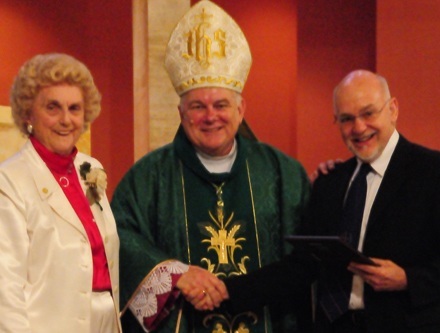 At the conclusion of Mass, the Catholic Educators Guild awarded its 41st Lumen Christi (Light of Christ) award to Brother Richard DeMaria, a Christian Brother who serves as executive director of the archdioceseâs Ministry of Christian Formation and superintendent of schools.

Like the Guild, which Miamiâs first Archbishop, Coleman Carroll, founded 50 years ago, Brother DeMaria was also celebrating his 50th anniversary as a Christian Brother.

âWelcome home, Archbishop Wenski,â said Marjorie Wessel, president of the Catholic Educators Guild. âItâs especially significant that we give this award to Brother DeMaria at this Mass for those in religious life.â

The guildâs goal is to provide Catholics who are working in education an opportunity for spiritual development and to enhance the education of students in both public and private schools. The award honors Catholic educators who have excelled in their field.

Brother DeMaria was born in Ohio. He has degrees in science and religious studies and a doctorate in theology. He worked at Iona College in New Rochelle, N.Y. for 18 years, as a faculty member, dean of students, provost and chief operating officer.

Brother DeMaria began working as an educator with Hispanic migrants on Floridaâs west coast in 1989. He was principal of Archbishop Curley-Notre Dame High School in Miami from 1993 to 1998. Since 1998, he has served as superintendent of schools for the archdiocese. 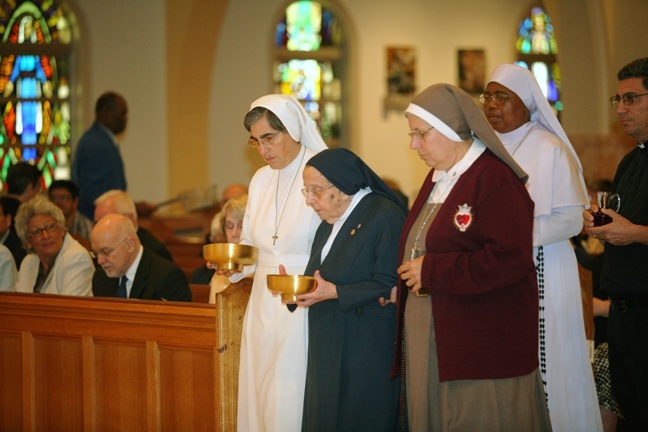 Representatives of religious communities bring up the offertory gifts during the Mass.