A diagnosis of ALS 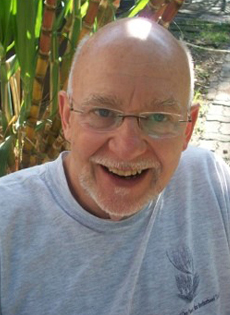 Editor’s note: After leaving the Archdiocese of Miami, Brother Richard De Maria spent six years as a missionary in Africa. He has chronicled his journey of faith in accepting this disease in a monthly blog, “Journey to Death,” from which this blog is excerpted.

Nearly two years ago, while working in Kenya, I began to get easily tired by walking. Coming home in January 2016 for my brother-in-law’s funeral, everyone noticed that I seemed exhausted by the trip. Since I was scheduled to come to the U.S. in late April for my biennial holiday, it was decided that I should remain here, and I embarked on a series of visits to doctors and tests.

Nothing surfaced to explain my weakness, but the doctor suggested the possibility of ALS â better known as Lou Gehrig’s disease. Many more months, tests, and consultations later, the doctors concluded that I have some form of the disease. However, there are so many different forms of ALS that it is impossible to predict the future. For example, Steven Hawking has a form of ALS that has allowed him to live for more than 40 years. My doctor has a patient who has lived 30 years. Others die within a year. So I don’t know much more, except that I am sick, and we must keep monitoring the progress of the disease.

I am not really surprised by this outcome, just disappointed about the uncertainty that remains. And so the advice, “live one day at a time,” becomes all the more important for me to observe.

What amazes me is how calm I am about the prospect. This calmness is not the result of ignorance of how this disease slowly but inevitably takes away all one’s abilities until one dies. I visited my cousin, Tom, every year for the seven years he and his wife bravely, heroically, fought the ravages of the disease, and I know well that a seven-year battle is unusually long.

What produces this calm in me? My faith in the saying that God never sends us a cross without the grace to bear it. My experience in life has always proven that to be true, and so I am confident that somehow or other I will develop, late in life, the humility to accept the certain loss of strength and abilities that is inevitable.

I also hope that this will lead me to a deeper experience of unity with my God of surprises. I will also, I hope, come to a deeper understanding of that theology which says that we are called to make up in our sufferings what is lacking in the sacrifice of Jesus.

My calm also comes from the knowledge that I will be accompanied during this time by a loving family, my brothers in my religious community, and a hoard of friends who have always supported me over my years. I will not do this alone.

Carlota E. Morales - 11/14/2017 02:14 PM
Dear Brother Richard, I think of you often, but more importantly, I think of the many lessons you taught us with your deep love for the less fortunate and most importantly for our Lord. I remember when we started Padre Pio and when we started Pax Christi. What an enthusiastic beginning! May the Lord take care of you. Respectfully, Carlota E. Morales, Ed. D. Principal Sts. Peter and Paul Catholic School

Joe A Iannone - 11/14/2017 09:33 AM
Brother Richard, you always inspired me by your gospel presence and dedicated work as a Catholic educator. I am confident that you will continually experience the healing grace of Jesus. I pray with you, Joe A. Iannone

Bertha Moro - 11/14/2017 06:56 AM
When I started working for the Diocese as principal of St. Patrick School 18 years ago, Br. De Maria was the Superintendent of Schools. His faith, warmth, kindness, and spirituality was contagious. Welcome home Brother De Maria, may God bless you now and always. You are in my prayers.

Emmy - 11/14/2017 06:48 AM
Br. Richard, knowing you in my family has enabled us to really grow in God. I am still growing from your experience of dealing with your current situation. God bless you with continued trust in Him

Joann Mulqueen - 11/13/2017 01:43 PM
This is Brother Richard's sister and I felt the need to comment as well. As Hope said (above) - Brother's monthly blogs are a true inspiration and reflect an awesome approach to such a devastating disease. I, too, watched my cousin live with this for 18 months, so was prepared (somewhat) for Richard's journey. I'm fortunate that he now lives 5 minutes away and I can see him often. He was over for dinner with two friends this past Saturday and, other than having to eat with a spoon, the visit was like any other. He continues to find joy in life, savor good food and drink, and love conversations! I'm so blessed that I will gain so many memories as I share his journey in the ways that I can.

Hope Sadowski - 11/13/2017 10:40 AM
I was fortunate to work for Brother DeMaria for 12 years. Learn from him every day accepting God's will and looking at life in a more fulfilling and spiritual way. His "Journey to Death" monthly blogs are so full of an unwavering faith. My friend from high school who lost her fight to ALS in just 18 months gave me the experience to see what a person goes through living day by day with this terrible disease. Brother DeMaria is an inspiration of accepting God's will with no question. May the Lord give him always the strength to carry on.

Annonymus - 11/13/2017 10:24 AM
Br. Richard, This a one moment of truth that you seem to be dealing with marvelously. The calm you are experiencing is a testament of your Faith. Thanks for sharing your thoughts, they are very inspiring to me. "God never sends us a cross without the grace to bear it". I also believe that everything He does comes from Love and leads to Love.