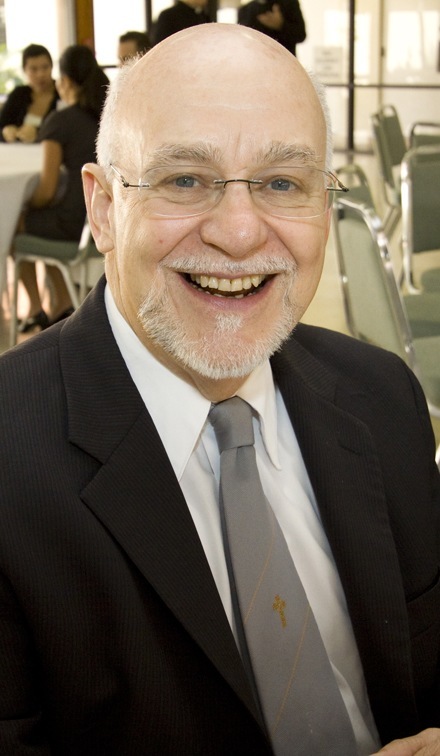 MIAMI â His secretary says itâs ânuts.â His family is supportive but not thrilled. Even he is wondering if Africa is the place for a 68-year-old.

Yet Christian Brother Richard DeMaria definitely believes that is where God is calling him: to work at the Catholic Bible Foundation of South Africa and perhaps later at a novitiate in Johannesburg.

âHaving the vow of obedience is a wonderful thing,â he said. âI would spend so much time thinking, where could I do the most good? But thatâs where they want me to be, so I donât.â

His last day on the job as director of Christian Formation and superintendent of schools for the Archdiocese of Miami was Dec. 15. He is expected in South Africa in January.

âI donât know what Iâm going to do,â said Brother DeMaria, noting that it might be clerical work in the instituteâs headquarters. All he knows is that it is a three-year commitment, and his community likes to have the brothers who go to Africa work a year in another ministry before being assigned to the novitiate.

âIâll do whatever they want,â said Brother DeMaria, who this year marked his 50th anniversary in religious life. He has been teaching at the high school or college level since 1964, and has been involved in administrative work in the archdiocese since 1993: First as principal of Archbishop Curley Notre Dame High School from 1993 to 1998, and since then as superintendent of schools.

âAt least as principal you see kids every day,â said Brother DeMaria, who for years continued to teach a class at Curley Notre Dame and most recently has been tutoring students one-on-one at the school.

The former president of Iona College in New York, where he worked for 17 years, said even if Africa were not on the horizon, âI would have asked out of this position. Iâm just eager to be out of administration.â

In fact, he had begun exploring options with his community about four years ago, after traveling to Zambia for a two-week immersion experience. He had decided that he would resign his position with the archdiocese when Archbishop John C. Favalora, who appointed him, reached the mandatory retirement age of 75 this December.

Archbishop Favalora actually retired a few months before his 75th birthday but Brother Richard only found out this October where his community was sending him.

The Christian Brothersâ House of Formation in South Africa has 62 novices, compared to less than a handful in the United States. âThatâs the place where the brothers are growing. I always wanted to be a part of that,â Brother DeMaria said.

âI think theyâre both nuts: him and the brothers that are sending him there,â said his outspoken secretary, Hope Sadowski. But âitâs a dream come true and you canât take that away from him.â

Sadowski said his leaving, however, could not come at a worst time. âEconomics are hard. Now more than ever thereâs a need for somebody to speak out for (the poor). And he has always been that voice.â

Indeed, Brother DeMaria was instrumental in encouraging archdiocesan schools to start programs for children with learning difficulties. Today, nearly 70 percent of archdiocesan schools offer those programs, compared to zero when he first arrived. He also was instrumental in convincing schools statewide to accept McKay Scholarships to help pay for those programs.

âThis is a way to help us help the poor. We are certainly the largest participants in these programs,â Brother DeMaria said, citing not only McKay but also the Step Up for Students (previously known as Florida PRIDE) scholarships for low-income students, which are funded by corporate tax credits.

By the same token, âIâm brokenhearted that we had to close so many inner city schools,â he added, referring to the fact that 10 archdiocesan schools have closed since 2008, hit by a double-whammy of dwindling enrollment and rising costs. âMy heart is with those schools, so for me thatâs a real sadness.â

He said the problem has âno easy solution,â considering the stiff competition from charter schools, which are government-funded and charge no tuition.

âFor a lot of the parents, thatâs what they really care about. They donât want the religion. They just want a small, safe school for their kids,â Brother DeMaria said. âWe have to convince every Catholic parentâ not to assume that Catholic education is unaffordable. âYou owe it to your child to at least go and find out.â

He said he remains convinced that âmaintaining the Catholic school system is the best possibility for continuing evangelization, and itâs not just the responsibility of the parents who send their children to the school.â

âWe have to make it clear that the school is a ministry of the parish,â Brother DeMaria said. âWe have so many students who have done so well in life because they went to Catholic schools. They have a debt to pay,â by making it possible for other children to obtain a Catholic education.

Brother DeMaria is under no illusion about the difficulties he will face in adjusting to his new life in South Africa, and said he will dearly miss the people he has worked with in the archdioceseâs Department of Schools, especially Msgr. Vincent Kelly, vicar of Christian Formation, whose advice has been âinvaluable.â

âIâm sure theyâre wondering about the 70-year-old guy whoâs going down there,â Brother DeMaria said of his African counterparts.

But as he wrote in his Christmas letter to friends and family members: âI realize that I have become used to living a life of comfort, thanks to the generosity of others. I realize as well that I have also become used to having influence. To live in a place where I will have no position or influence or importance and where many comforts will not be available to me will be difficult, to be sure.

âActually, I look forward to this, not because I am a masochist but because I am a Christian who believes that new life always comes after death. At this point in my life, I need to be stretched, disoriented, broken-down, so that a new strength and wisdom can emerge. I am hopeful that my experience as a âstranger in a strange landâ will result in a person who has a greater ability to wonder at beauty, truth and the good. I am eager to begin undergoing this pruning process.â

Brother Palmieri entered the Marist Brothers in 1969 and came to Miami in 1977 to teach at Christopher Columbus High School. He returned to New York in 1986 and served as principal of Archbishop Molloy High School there until 1995, when he returned to Columbus as principal. He joined the archdiocesan Department of Schools in 2001 as associate superintendent for secondary schools.

âWe are indeed grateful for Brother Angeloâs willingness to guide the efforts of our schools, religious education and lay ministry offices for the next several months,â said Sister Elizabeth Worley, chancellor for administration and chief operating officer of the archdiocese. âHis background in schools and religious education as principal and associate superintendent will serve him well in this expanded leadership role.â