Not wanting to sit idle during pandemic, third order fraternity in Hialeah sell them to raise funds 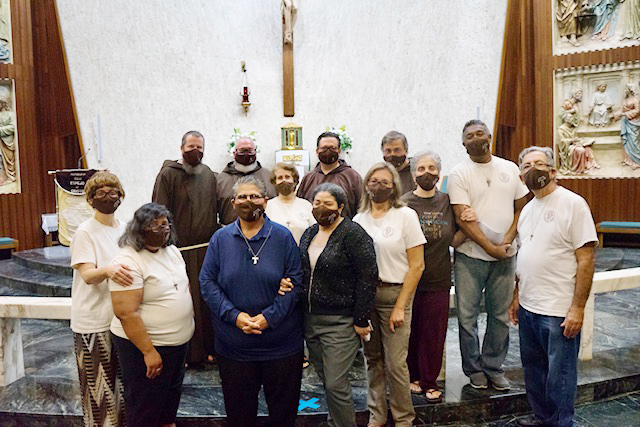 After the rite of admission of a new member to the Secular Franciscan Order – Espejo de Cristo (Mirror of Christ) all fraternity members pose with members of the Order of Friars Minor assigned to the recently erected St. Pio Friary located on the grounds of St. Jerome Parish in Fort Lauderdale, last September at Immaculate Conception Parish in Hialeah.

HIALEAH | Last March, when many activities in South Florida were canceled to prevent the spread of the coronavirus, members of the Secular Franciscan Order St. Francis of Assisi-Espejo de Cristo (Mirror of Christ), refused to sit with their arms crossed and began making face masks. 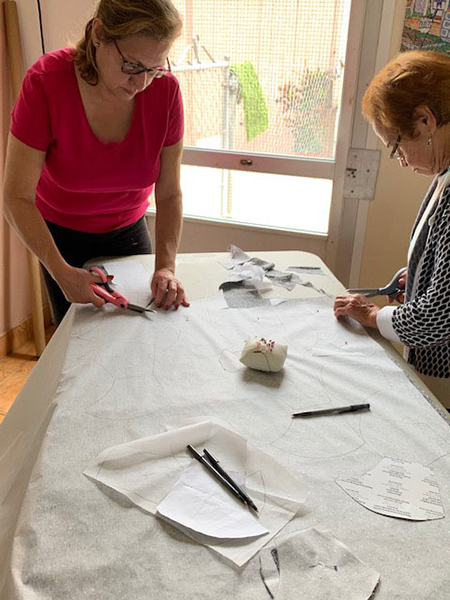 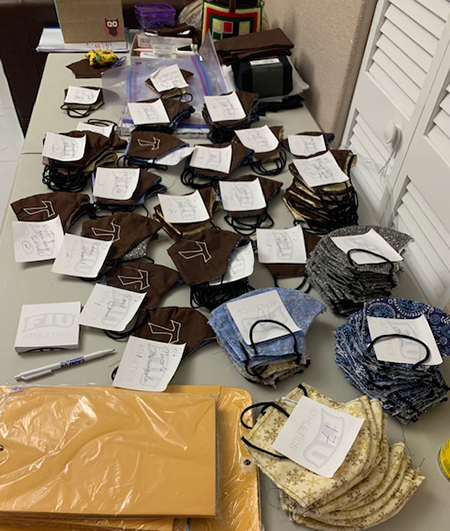 Masks embroidered with a Tau cross, the symbol of the Franciscans were made by members of the Secular Franciscan Order Mirror of Christ during the COVID-19 pandemic to sell and raise funds. 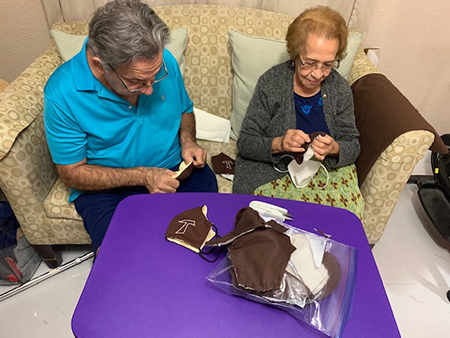 Members of the Secular Franciscan Order Espejo de Cristo (Mirror of Christ), Reny Aguilera, OFS, and Hilda Nieves help to turn the masks over after being sewn. 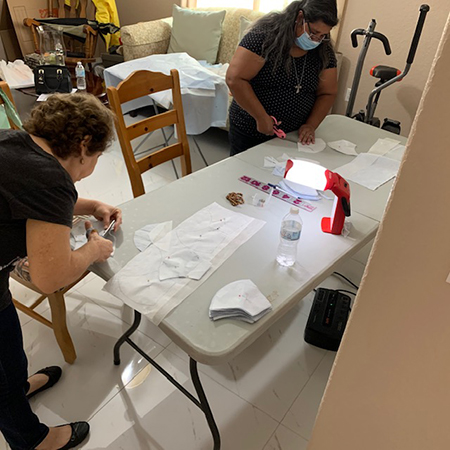 “The idea was the Lord’s, who illuminated me,” said Hilda Aguilera, a minister of the Hialeah-based fraternity. She added, “I am no seamstress. I learned to make the masks by making them.”

Concerned about the need to continue fundraising for those in need, Aguilera and the group hit on the idea of making masks to sell to other secular Franciscan fraternities in the United States. All other fundraising events, like community dinners, had to be canceled due to COVID-19.

All 10 members of the fraternity helped in the creation of the masks, which are embroidered with a Tau cross, the symbol of the Franciscans.

During the shutdown's first months, the members of the fraternity spent weekends cutting the molds and the fabric. Meanwhile, Aguilera and her mom sewed masks to fulfill orders coming from different parts of the continental U.S., the islands of Hawaii, and even Portugal.

“I never thought that they would ask from so far away. It was a small idea that prospered. We were very blessed,” said Aguilera. “God had a plan for this.”

The Hialeah fraternity is the only Spanish-speaking one in South Florida. Its masks are sold by making direct requests to Aguilera.

Seven months into the pandemic, orders have slowed down, she said. But members plan on making masks until November “because in December we have other ministries that we always do, with the favor of God,” she said.

The ministries include gathering food and toy donations for families of immigrants and farmworkers in South Florida during the Christmas season.

Throughout the year, members collect and donate packets of personal care and hygiene items that they deliver to the elderly and homeless served at the shelter of the Missionaries of Charity in Miami. Although the Missionaries currently do not allow volunteers into the shelter, the secular Franciscans continue to deliver food and water to the homeless.

Prior to the pandemic, the fraternity also delivered sandwiches and hot meals to the homeless in different parts of Miami, until a city mandate prohibited it.

“Due to COVID we found ourselves a little sad because we didn’t have the funds to help, but thanks be to God, and with much prayer, we began to make the masks, it prospered, and we were able to raise funds,” Aguilera said.

WHO ARE THE SECULAR FRANCISCANS?

The Secular Franciscan Order (which goes by the initials OFS), is part of the Franciscan movement established over 800 years ago by St. Francis of Assisi.

Secular Franciscans have a Rule of Life and General Constitutions that "guide us to live a life of penitence through the teachings of the Gospel and the Church, while at the same time, living the works of mercy,” Aguilera pointed out.

Their current rule is the reform approved by Pope Paul VI in 1978. Previously, they were known as the Third Order of St. Francis of Assisi. Fraternities are located all over the world and “are very popular in Latin America,” said Brother Lombardo D’Auria, spiritual assistant to the Espejo de Cristo community. He is one of three members of the Order of Friars Minor (the first order created by St. Francis) assigned to the recently erected St. Pio Friary located on the grounds of St. Jerome Parish in Fort Lauderdale.

The members of Espejo de Cristo belong to different parishes in South Florida. Franciscan Father Roderic Petrie, now deceased, started the fraternity at Immaculate Conception Church in Hialeah in 2003. He started it in Spanish because there was no other Spanish-speaking one in the area.

Espejo de Cristo was sponsored by the already established Queen of Peace Fraternity in Miami until its canonical establishment by the Holy See in 2009. It is one of three fraternities active in the Archdiocese of Miami. The other one is St. Joseph's Fraternity in Fort Lauderdale.