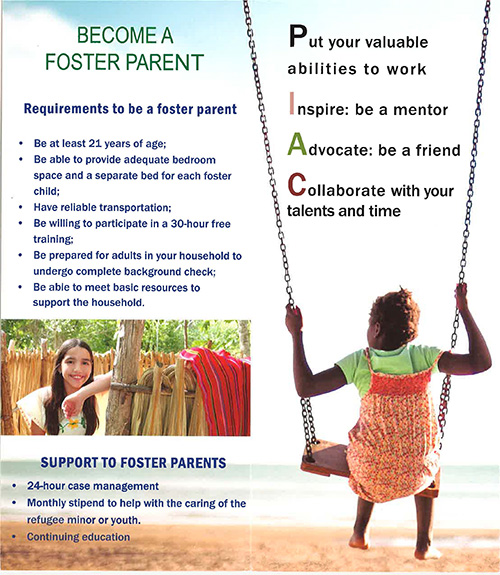 Image from Catholic Charities' brochure on becoming a foster parent for the Unaccompanied Refugee Minors Program.

MIAMI | Have you ever wondered where the unaccompanied children who are arriving at the country's southern border go? Or what happens to them once they are admitted into the United States?

According to the latest report from U.S. Customs and Border Protection, in April 2021 the Border Patrol recorded the entry of 13,962 unaccompanied minors through the southern border, mostly from Guatemala, Honduras and El Salvador. Although there has been a reduction in the number of arrivals in comparison to March of this year (15,918), it is still one of the highest numbers recorded in recent years.

Official data indicate that about 90% of these unaccompanied minors are reunited with a family member or sponsor in the United States, while the remaining 10% enter the care of the Department of Health and Human Services.

There are nearly 23,000 children in out-of-home foster care in Florida, according to data from the Department of Children and Families. "Of those, about 4,000 are ready to be placed in fulltime foster care," said Erik Dellenback, a member of the Florida Faith-Based and Community-Based Council, while speaking on the Florida Conference of Catholic Bishops' “Catholics Across the Aisle” podcast.

The podcast, which also featured Shevaun Harris, DCF secretary, was the first of two done to mark May as national Foster Care Awareness Month.

Florida is one of the top five states with the highest number of children in foster care, so DCF and Catholic Charities agencies in the state are promoting foster care and encouraging more families to consider providing loving homes for children separated from their parents.

"It's a month of recognition, celebration and awareness to educate the community, to remind others that already know and to get people excited about becoming foster parents. In our case, to become foster parents to refugee (minors)," said Monica Farias, director of the Unaccompanied Refugee Minors Program at Catholic Charities of the Archdiocese of Miami.

Farias pointed out that this program is similar to Operation Pedro Pan, which Msgr. Bryan Walsh, an archdiocesan priest, developed 60 years ago to resettle Cuban minors who left the island unaccompanied, fleeing the communist regime that was in place. Operation Pedro Pan benefited more than 14,000 minors, providing them with safe places until they were reunited with their families.

Catholic Charities can assist 37 minors, but currently assists 28 children and young adults with refugee, asylee or trafficked immigration status who are in the country without a parent or guardian. Some come from refugee camps in the Middle East or from African countries, but most are minors who came across the southern border. "The vast majority are from Guatemala and Honduras," said Farias.

With the increase in child crossings, "a lot more foster parents are going to be needed," Farias said. She explained that the minors coming to Catholic Charities are referred by the U.S. Unaccompanied Refugee Minors Program, which has been in operation since 1980.

Currently, 23 URM programs operate in 15 states. The U.S. Conference of Catholic Bishops and Lutheran Immigration and Refugee Service are the two national resettlement agencies authorized by the State Department to place migrant minors in temporary foster care. The Office of Refugee Resettlement refers the minors to the different programs nationwide.

Image from Catholic Charities' brochure on becoming a foster parent for the Unaccompanied Refugee Minors Program.

"In order for us to incorporate a child into our program, we must have foster parents who are ready and willing to receive unaccompanied children," Farias said.

Foster parents must meet requirements set by the State of Florida, including taking a training and passing a criminal background check, and demonstrating they have sufficient income to support themselves as well as adequate space to house a child, among other things.

Many families don't consider foster care because of their work schedules, because they don't have the space to take in another family member or because they are raising their own children. But "what is perhaps more restrictive and influences the decision is that it is a long-term commitment that requires a whole family accommodation to receive a person who is not part of your family, but who will undoubtedly become part of your family," explained Farias.

The program offers ongoing support. "It's a collaborative team effort," Farias noted, adding that Catholic Charities maintains legal guardianship of the child, and works at all times with the foster parents to acculturate the child and prepare him or her for an independent life in this country.

Children may remain in foster care until the age of 18, depending on their immigration status and other circumstances. For youths between the ages of 18 and 23, the program offers transitional homes to independent living. They continue to be provided with education, employment readiness and financial education.

If interested adults are unable to become foster parents, the program also needs mentors and volunteers to coordinate events and collect donations.

"I think the Catholic Church has done a great job with this program," Farias noted, adding that the program "gives the youths all the tools they need so that they can thrive when they reach that age of maturity."

But the most significant thing is "the importance of having families to welcome these refugees. We insist that we need families to help us make these kids feel comfortable and that the sacrifice of leaving their families and their countries behind is worth it. That this sacrifice has value," added Farias.