'To prepare the best priests possible'

BOYNTON BEACH | The faculty, staff and student body at Florida’s major seminary have been finding the fortitude to face the COVID-19 pandemic by keeping the crisis in a global perspective, according to the new rector/president of St. Vincent de Paul Regional Seminary.

“We have had a sense from the beginning of the importance of putting the challenges we have faced in the context of suffering the whole world has experienced,” said Father Alfredo Hernandez. “In the spring, the lockdown had its own special features, given the (pandemic’s) suddenness.”

Father Hernandez was previously the academic dean and vice rector. Since 1997, he has served in various capacities at the seminary, which is located just south of West Palm Beach. He has been acting rector since June, when his predecessor, Father David L. Toups, was named bishop of the Diocese of Beaumont in southeast Texas. Father Hernandez assumed the role of rector/president at the end of October and was formally installed Nov. 23, 2020. 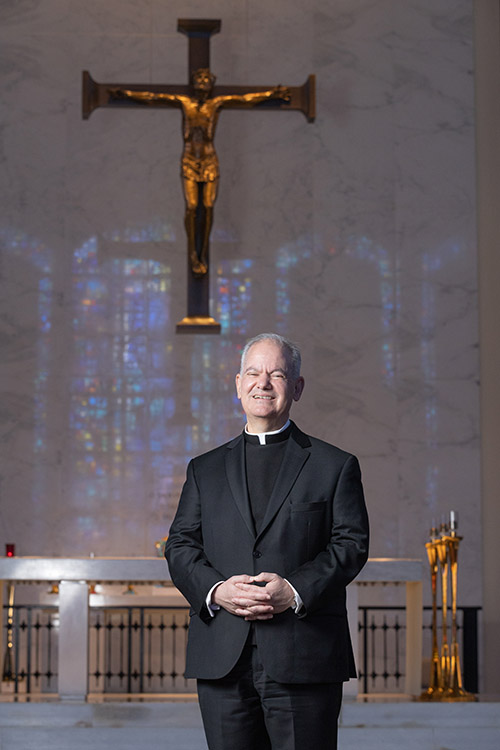 Father Alfredo Hernandez, St. Vincent de Paul Seminary's new rector and president, grew up in West Palm Beach and attended Cardinal Newman High School there. He has taught and served at the seminary since 1997, most recently as academic dean and vice rector.

“Bishop Toups certainly worked closely with the bishops of Florida and with the faculty and the seminarians to develop a response that protected our bodily health while allowing formation to continue,” Father Hernandez noted.

Since the seminary's foundation in 1963, over 600 priests have been formed and gone on to serve in parishes throughout the southeastern U.S. and the Caribbean. St. Vincent de Paul is a free-standing graduate/professional school of theology offering the Master of Arts, primarily for pre-theologians as well as lay students, the Master of Divinity for priesthood candidates, and the Master of Arts for permanent deacon candidates and interested laity. It is the only fully bilingual theologate in the country.

This fall, St. Vincent de Paul is operating with a blend of on-campus learning and activities as well as remote connection to the various dioceses.

During the spring lockdown, when South Florida was among the areas with the highest numbers of COVID-19 cases, the seminary decided to have faculty, staff and students shelter in place and form a kind of safety bubble from the pandemic.

Faculty and staff were quick to adapt to the situation, wearing face masks when appropriate, and moving into technology and online learning solutions such as Zoom video conferencing.

“It’s not perfect, and there is certainly sorrow at being disconnected, but there has also been a deeper sense of focus for many of us,” Father Hernandez said. “We had to 'Zoom' from zero to sixty in 24 hours last spring, but a lot of the faculty has gotten very adept at it.”

The Easter celebration was moved online for the wider church to share, as were the 2020 graduation and ordination ceremonies. Even the annual Mass for Friends of the Seminary in October was held virtually, with 600 people watching in real time.

In recognition that no one can live in a state of constant panic and tension, the seminarians have been hosting weekend cookouts, social events and musical projects among themselves to retain a sense of joy on campus. And many of the students took the initiative to record short, daily video messages which were posted online for the wider community.

The seminary also created a program whereby pre-theology students can minister over the phone to hundreds of supporters, outreach that has been well received — particularly during this challenging time, Father Hernandez noted.

He said the whole pandemic experience at the seminary campus has created in him a greater sense of fatherhood: looking out for the well-being of the entire student community and staff.

On March 19, on the solemnity of St. Joseph, when the school officially initiated its lockdown, Father Hernandez preached before a eucharistic procession and initiated 40 hours of devotion in prayer for the world.

“I said then the words that have come back to me often and still mark my sense of what we are about, that the Angel of the Lord tells each of us the same thing he said to St. Joseph: ‘Do not be afraid.’”

“We are all called to be, like St. Joseph, custodians of the Redeemer,” he said. “To be free of fear and to have the sense that we are caring for those who will carry on the mission of Jesus, as surely as Joseph cared for Jesus and Mary, motivates me as a priest and I believe motivates our faculty and staff and our seminarians.”

Even as St. Vincent de Paul enters its 2020-2021 academic year during a pandemic, there is reason to be hopeful. The school is reporting a record enrollment, with a total of 123 seminarians.

The campus is in good repair, with two new residence halls under construction. Most of the rest of the campus was renovated in recent years. A new power generator is up and running as well, to serve the facility in times of hurricanes and power outages.

“While we will keep on working on making sure our plant is able to support our mission, my focus will be primarily on how we are fulfilling our mission, to prepare the best priests possible to serve in your parishes,” Father Hernandez said.

In terms of formation for ministry, St. Vincent de Paul continues to focus on preparing good homilists, particularly by emphasizing biblical exegesis and the use of Verbum software, which seminary donors helped the school acquire.

“Something I would like to focus more on is making sure we are not only preparing men to be able to be fluent in English and in Spanish but also to be adept at ministry in English-speaking and Spanish-speaking communities,” said the priest, who is a Cuban-American and native of West Palm Beach.

“I know that being able to do Hispanic ministry well takes more than knowing Spanish. The divisions in the Church and in our country in the current moment challenge us even more to be able to preach clearly and lovingly, in a way that allows the Church and her ministers to bring people closer to God and to each other,” he said.

Father Hernandez said he believes the St. Vincent de Paul seminarians are learning, showing flexibility and the ability to respond to different situations, bringing the Gospel to bear on situations that require courage and “the ability to turn on a dime.”

“That bodes well for their future ministry, no matter what changes are ahead of us,” he said. “I hope that learning to trust God more deeply will mark the priests who are formed at SVDP in our time in a way that will help them to be fervent and faithful priests for their whole lives.”

As for the legacy left by his predecessor, Father Hernandez credited Bishop Toups for not only renovating and expanding the campus, but for the way he touched the hearts of the seminary community and wider seminary family.

“We can never thank Bishop Toups enough for the work that he has done here over the last eight years and also for the work he did in his earlier time at St. Vincent, when he served as dean of Human Formation from 2004–2006,” he said. “He did a lot to start building traditions here, such as with the design of our coat of arms.”