BOYNTON BEACH | At the conclusion of its annual Friends of the Seminary Mass, held virtually this year due to the pandemic, St. Vincent de Paul Regional Seminary announced the recipients of its annual award.

Father Gerald Grace, who died in 2018, received one of three 2020 St. Vincent de Paul awards for exemplary dedication to the seminary's mission. He served on the teaching staff of the seminary from 1976 to 1993.

He was incardinated into the then-Diocese of Miami in 1965 and later became a priest of the newly established Diocese of Palm Beach (formed in 1984). In July 1976, he was appointed to the teaching staff of St. Vincent de Paul Seminary, where he continued to serve until 1993. 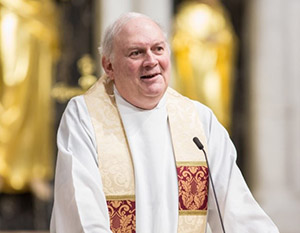 Msgr. Christopher J. Schreck, a priest of the Diocese of Savannah and pastor of St. William Parish in Simons Island, Georgia, has served as the 16th rector/president of the Pontifical College Josephinum, Columbus, Ohio, as well as professor of sacred scripture in the School of Theology (2012-2019). 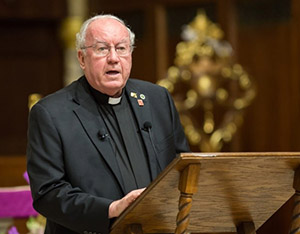 Father Michael McNally received one of three 2020 St. Vincent de Paul awards for exemplary dedication to the seminary's mission. He taught at St. John Vianney College Seminary in Miami from 1975 to 1979, and at St. Vincent de Paul from 1982 to 1993. He is also the premier Catholic historian of Florida.

Father Michael J. McNally, a priest of the Diocese of Palm Beach, was ordained in 1973 after receiving a bachelor's degree, and master's degrees in divinity and theology, from St. Vincent de Paul Seminary. He went on to receive a master's and doctoral degrees from the University of Notre Dame.

He was appointed pastor of St. Mark the Evangelist Church in Fort Pierce in 2005, serving there until his retirement in 2018. Since then, he has served as chaplain to the Poor Clare Nuns at San Damiano Monastery in Fort Myers Beach.