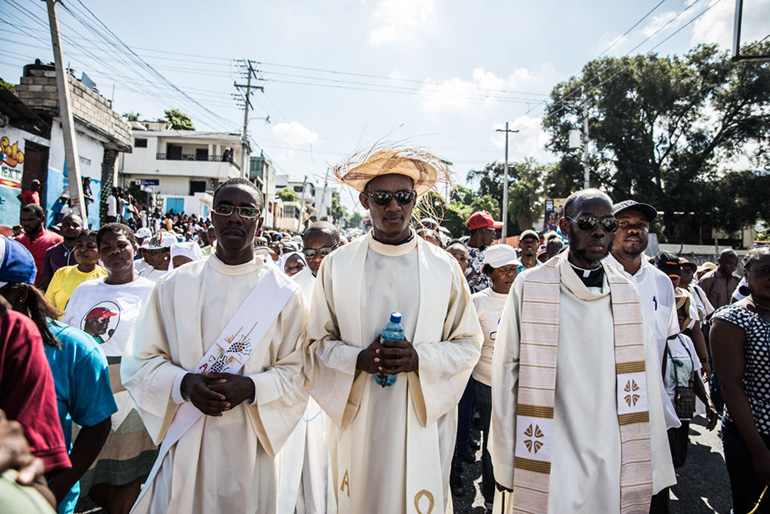 Catholic faithful demonstrate in a silent and non-violent march in Port-au-Prince against the Haitian government Oct. 22, 2019. Thousands of Catholics demanding the resignation of Haiti's president marched through the capital Tuesday, becoming the latest group to join an outcry against him. They gathered outside one of the main churches in Port-au-Prince and denounced President Jovenel Moise as corrupt and incompetent. (Photo by Valerie Baeriswyl / AFP via Getty Images)

MIAMI | A missionary group which spearheads a four-decade-old sister relationship between the Archdiocese of Miami and its sister diocese in northwestern Haiti has decided to postpone a mission trip it had planned for next month.

The lay missionary group, Amor en Accion, supports some 30 Catholic schools by funding faculty salaries and student nutrition programs. The group was planning to take a small delegation — including a clergy member of the archdiocesan Pastoral Center staff — to Haiti in November.

Frequent protests in Port-au-Prince, other regional cities and the rural areas have shut down transportation, closed businesses and hospitals, and forced children to stay home from school, paralyzing the Caribbean nation of 11 million.

“It is not just out of caution for ourselves. We don't want to be a burden on those we serve, because when we fly over there we do drive up to Port-de-Paix and we don't want them to spend that money on resources,” said Janelle Jay, mission coordinator for Amor en Accion.

Jay said she had been monitoring the situation in Haiti more closely since early October and that her board of directors recommended waiting until next spring for a site visit.

She said in recent weeks staffers had started hearing concerning reports from within Haiti. She said of one priest at the Port-de-Paix cathedral: “I have never heard him sound so preoccupied, but this was (a crisis on) another level, and he said he wasn't sure what to expect out of the situation.”

Amor en Acción is a missionary community of the Archdiocese of Miami, formed in 1976 by a group of young immigrants. The group was officially established as a lay missionary community, working early in the Dominican Republic with the blessing and sponsorship of then Archbishop Edward A. McCarthy.

In 1979, his direction and guidance led Amor en Acción to begin collaborating in Haiti, as the missionary arm of the Archdiocese of Miami in its sister diocese relationship with the Diocese of Port-de-Paix in Haiti. The group recently expanded into the Diocese of Gonaives and continues to work in the Dominican Republic.

Medical and nutrition projects there serve an estimated 2,000 adults and over 5,000 children, directly or indirectly.

“Things in Haiti are generally difficult but this is much worse. We hope that things will get better,” Jay said.

She noted that it was somewhat historic that the Catholic Church-sponsored walk for peace, held Oct. 22, called for a resolution to the crisis that has paralyzed the country.

“We always work toward a more hopeful future for Haiti,” Jay said. “We have been there for 40 years and we have been through these situations.”