People featured in 2020 campaign video were helped by ABCD, now continue to help others

If you donated to the ABCD in the 1960s, you helped provide housing for Tony Argiz, an unaccompanied minor from Cuba. You also made it possible for María Arazoza to be born at Mercy Hospital.

If you donated in the 1990s, you helped put Father Reginald Jean-Mary through the seminary.

And if you donated to ABCD in the 2010s, you helped Tracey Dominique attend a Catholic high school.

All four of them appear in the video which will be shown in churches across the archdiocese Jan. 25 and 26, the weekend when the 2020 ABCD campaign kicks off. And all four are profiled because they not only received from ABCD, they also give — perpetuating a cycle of generosity that will reverberate for decades to come.

“Getting a Catholic education really helped me to see what I really want to do in life, which is help others,” said Dominique, 22, who is studying biology at the University of Miami. “That’s why I want to go into the medical field also. It gave me a chance to be in there helping people while also getting the Catholic education.”

Dominique arrived in the U.S. from her native Haiti at the age of 8 and was able to distinguish herself academically while learning a second language and adapting to a new culture. She initially attended public schools, then enrolled at St. Mary Cathedral School in Miami for eighth grade. Thanks to scholarships, she was able to attend Archbishop Curley-Notre Dame High School, graduating in 2016. (In 2017, Curley-Notre Dame merged with Msgr. Edward Pace High School in Miami Gardens). 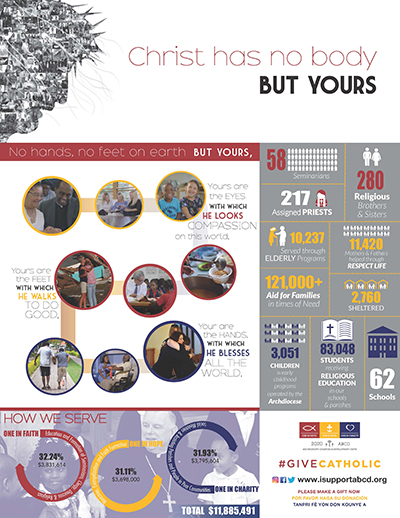 At Curley-Notre Dame she participated in the Knightingales Choir and Knights for Life. In December 2013, she received the Unstoppable Scholar Award from Miami-Dade County. Tracey also led a drive which raised over $6,600 for a summer camp in an orphanage in Haiti.

She knows firsthand the results of giving to ABCD: “They can be making a difference in someone’s life.”

Arazoza’s story certainly proves that. She was born at Mercy Hospital to recently arrived Cuban exiles. Her father, José “Pepe” Figarola, had found work delivering “cantinas” (meals) to people’s homes. When he arrived at the hospital with his wife, María Francisca, ready to give birth, he made it clear he would be unable to pay for their services. The staff told him he could pay by donating blood — so three family members donated a pint each.

It’s not a story María Arazoza heard growing up. That is, until she was in her 20s and followed her father into a career in finance. He ultimately went to work for Merrill Lynch in South Florida, becoming one of its vice-presidents.

“At first, as Cuban exiles, there wasn’t the ability to give back,” Arazoza said. “As his financial situation improved and he was able to give back, the stories came to life of why he wanted to do it.”

Forever grateful, Figarola became a steadfast supporter of the ABCD, even serving as campaign chairman one year. His daughter followed in those footsteps as well. A member of Epiphany Parish in Miami, she serves on the board of the Catholic Community Foundation, the Archdiocese of Miami Investment Committee, and the Centro Mater Foundation. In 2015, she received a “Woman of Faith” award from the archdiocese.

Although reluctant at first, she told the Florida Catholic why she agreed to being featured in this year’s ABCD, along with her sisters. “We’re happy to be able to honor our parents who are no longer with us by sharing their story. I feel they would be proud to see their legacy of giving back to the archdiocesan family continue.”

Argiz is chairman and CEO of MBAF, one of the top 40 accounting firms in the nation. A graduate of Florida International University, he arrived in Miami from Cuba in 1962, along with his 19-year-old brother, as part of the Pedro Pan exodus of unaccompanied minors organized by the late Msgr. Bryan Walsh.

Argiz still can’t contain his emotions when he thinks about that time. His brother decided he could take care of him, and they moved to Tampa. Argiz enrolled in the third grade at a public school and his brother found work — two jobs. He soon realized that left his sibling pretty much unsupervised, so he sought help from Catholic Charities.

When he looked up his Pedro Pan file — all of them are now archived at Barry University in Miami Shores — he realized the Catholic Church had paid for everything: tuition, books, food and clothing, every year.

“That’s why I dedicate so much time in helping others,” Argiz said. “The Church has played a significant part in my life. That’s why I’m always connected to the Church. It’s been there for me.”

A member of St. Augustine Parish in Coral Gables, Argiz is a past chair of the ABCD campaign and has received myriad awards for his community service, including a New American Award from Catholic Legal Services in 2014; the Silver Medallion Award in 2010 from the Miami Coalition of Christians and Jews; and the 2017 Distinguished Citizen Award from the Boy Scouts of America. He also dedicated “40 years of my life” to Carrollton School of the Sacred Heart in Coconut Grove.

“It’s part of being Catholic, taking care of others,” Argiz said. “I give not only the money but my time, which is valuable. But I could never give enough back for what they did for me those five years. It’s so meaningful in my life.”

Born in Haiti, Father Jean-Mary spoke neither English nor Spanish when he entered the seminary in Miami in 1992. He was ordained for the archdiocese in May 2001 and is now administrator of Notre Dame d’Haiti Mission in Miami. He cited multiple reasons for being grateful to ABCD.

“I am in a broader way the fruit of the generous and kind support received from the ABCD,” he said via email, noting that he attended “two great seminaries,” St. John Vianney in Miami and St. Vincent de Paul in Boynton Beach. His education at both was financed and supported by ABCD benefactors, so the campaign helped make him “who I am as priest not just for the Archdiocese of Miami but also of the universal Church of Christ.”

Father Jean-Mary praised the “great academic, spiritual, pastoral and human formation” provided by the seminaries, as well as the bilingual instruction — he now speaks both English and Spanish — “that has opened up my horizon to other ethnic groups by giving me a greater sense of Church and a greater spirit of integration.”

ABCD continues to help his community at Notre Dame d’Haiti, he said.

“Five years ago, we built the church of Notre-Dame d'Haiti that is now the greatest symbol of pride and testimony of faith for the Haitian American community in Little Haiti, that is now living under the great dictatorship of gentrification,” he noted. “Without the support of the archdiocese, it would have been very difficult to achieve such a goal.”

ABCD funds also have benefited the Notre-Dame d'Haiti Day Care Center, operated by Catholic Charities on church grounds. The center provides a safe learning environment for children from the parish community and beyond.

“Today many families find a way to go to work in order to achieve the American dream partly because of ABCD,” Father Jean-Mary noted. He called ABCD “a Christian endeavor that has been instrumental in changing lives in the Archdiocese of Miami.” 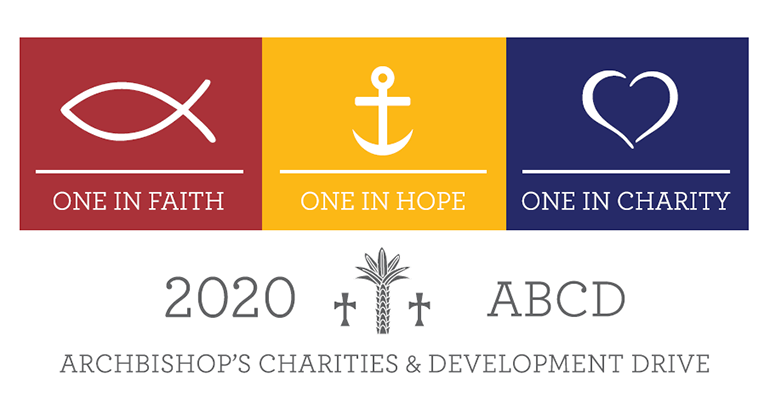