Our Lady Queen of Martyrs celebrates its 60th anniversary

English Spanish
A crown shows Mary's status as Queen of Heaven as well as Queen of Martyrs. A palm branch symbolizes martyrdom.

In The Annunciation, Mary is cast as a fleur-de-lis, a lily, to show her purity. The Holy Spirit, as a dove, overshadows her to conceive Jesus.

The Vision brings Mary, as an "M" and a cross, to the door of her relative Elizabeth, herself pregnant with John the Baptist.

The Birth of Our Lord has a manger comforting a Chi-Rho, standing for Christos. Shining on the scene is the Star of Bethlehem.

In the Presentation of the Child, a dove -- an offering by poor people -- is shown in a basket, backed by a Star of David.

A lamp and a scroll stands for the finding of the Child Jesus, a mystery of the rosary. When Jesus was a boy, Mary and Joseph found him in the Temple, speaking with elders of the law.

Holy Thursday Eucharist includes the familiar elements of bread and wine, along with the wheat and grapes that produce them. The first Holy Thursday took place the night before Jesus' death.

The Crucifixion shows the familiar images of crosses and Calvary. The initials INRI stand for "Iesus Nazarenus Rex Iudaeorum," Latin for "Jesus of Nazareth, King of the Jews."

As the first Easter dawns, Jesus' tomb stands empty, with a victory banner flying outside.

The Ascension has the Chi-Rho monogram, for Christos, rising from the Earth.

The Holy Spirit descends as a dove in the Pentecost window, bringing tongues of fire. The Bible says the fire rested on the heads of the apostles.

In The Assumption, Mary is shown as a Fleur-de-Lis, with three stylized angels bearing her to heaven.

Mary is crowned Queen of Heaven and Earth by the Trinity -- with God the Father represented as a hand, God the Son symbolized by a cross, and God the Holy Spirit as a dove.

Ornate tabernacle stands in the chancel at Our Lady Queen of Martyrs. The object is a chest that holds the consecrated bread of the Eucharist.

This mural of Little Boy Blue, in the parish hall at Our Lady Queen of Martyrs Church, was painted by teacher Martha Loftus at the church school.

This mural of Mother Goose, in the parish hall at Our Lady Queen of Martyrs Church, was painted by teacher Martha Loftus at the church school.

Our Lady of Guadalupe is given a serious, childlike look in this painting in the parish office of Our Lady Queen of Martyrs Church, Fort Lauderdale.

Jesus carries a lamb on his shoulders in a contemporary painting of the Good Shepherd theme. The lithograph is in the parish office at Our Lady Queen of Martyrs Church, Fort Lauderdale.

This statuette of Our Lady of Charity, a gift from the local Cuban community, stands on the wall at Our Lady Queen of Martyrs Church in Fort Lauderdale.

A Confirmation plaque is shown with the cross and the Holy Spirit dove, along with inspirational tongues of flame. The plaque is in the chapel at Our Lady Queen of Martyrs Church, Fort Lauderdale.

A stream flows through a Baptism plaque, flowing beneath a cross and a candle. Infusing the water is the Holy Spirit as a dove. The plaque is in the chapel at Our Lady Queen of Martyrs Church, Fort Lauderdale.

Elements of the Eucharist fill out this plaque in the chapel at Our Lady Queen of Martyrs. They include the consecrated bread over a chalice of wine, along with the wheat and grapes that yielded them. Also seen is a cross with a Chi symbol, standing for Christos.

FORT LAUDERDALE | Regina Medina didn’t want to leave Ohio. She'd grown up in a family with 13 siblings, and she knew no one in South Florida.

“I’ll stay only if we find a church and get involved with people with the same morals and beliefs,” she told her husband, Francisco.

In less than a year, they found such a place: Our Lady Queen of Martyrs Church. The Medinas and their children plunged into children’s ministries, Eucharistic ministry and church festivals. Medina currently works as the church secretary. And after nearly four decades, she can't imagine going anywhere else.

“The people are so warm and receptive,” Medina said of OLQM, which is planning to celebrate its 60th anniversary at 11 a.m. Nov. 5 with a bilingual Mass celebrated by Archbishop Thomas Wenski. “They welcomed us with open arms. They made us feel at home.”

As one of the first parishes in Broward County â only St. Anthony in Fort Lauderdale and St. Clement in Wilton Manors are older â Queen of Martyrs has raised two generations of Catholics, many of whom have peopled newer parishes as they’ve been founded. The church has also weathered changes in society and demographics, yet retained its open, welcoming atmosphere, say longtime members and alumni. 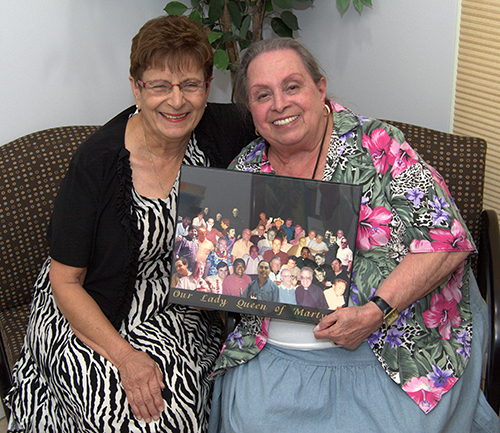 Regina Medina, left, and Jessie Chiccone hold a composite photo of former pastors at Our Lady Queen of Martyrs. The two women met four decades ago, and "We've been huggers ever since," Chiccone said.

OLQM is older even than the archdiocese, which was founded as a diocese in 1958. Starting in 1953 as a mission of St. Anthony Church in eastern Fort Lauderdale, Queen of Martyrs was established by order of Archbishop Joseph P. Hurley of St. Augustine in 1956.

Within months, Msgr. O'Looney dedicated a church-cafeteria complex, then broke ground for an administration building in 1969. OLQM school opened in 1957. The church began with 1,100 member families, then nearly tripled to some 3,000 families by spring 1959.

Nor were they Sunday-only Christians. Even in its early years, OLQM was the locus of a Ladies' Guild, clubs for men and ushers, a St. Vincent De Paul Society, a home and school association, and groups of Boy and Girl Scouts. Members have also been involved with Respect Life and the Neocatechumenal Way. A lay service group, known as St. Joseph’s Order of Franciscans, has 29 members and meets monthly.

Barbara Piersall, who joined OLQM in 1959, remembers the early times. She became an extraordinary minister of holy Communion minister and a Cub Scout den mother. Her husband, Ike, became an usher.

She remembers small, colorful details. For years, a group of retired women called the Queen Bees made jewelry and candles, selling them every month or two as church fundraisers. And the Knights of Columbus gave Tootsie Rolls for donations; then they donated the proceeds to the mentally challenged, she said.

“It was a small, warm parish, like family," Piersall said. "Everybody knew everybody. Everybody pitched in and helped.”

Jessie Chiccone, a member since 1967, has taught religious education, sung in the choir and served as an extraordinary minister of holy Communion. She's also washed altar cloths, arranged flowers around the chancel and volunteered at the rectory for 10 years. And she's an original member of a weekly home-based rosary group.

"Pretty much any church job, I've done it," Chiccone said. 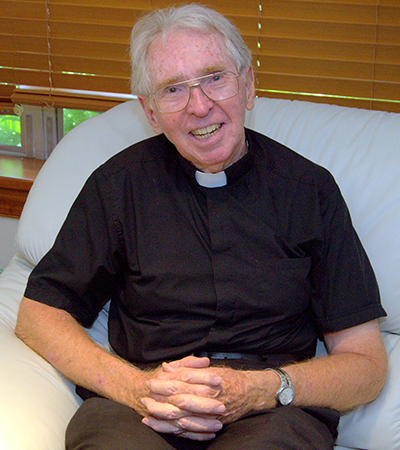 Father Michael Hoyer served Our Lady Queen of Martyrs from 1989 to 2011, the longest of any priest thus far.

She and other longtime parishioners fondly remember the tenure of Father Michael “Happy” Hoyer, who pastored Queen of Martyrs longer than anyone else. The Hoyer years, from December 1989 through June 2011, saw vigorous growth. And individual members treasure their relationships with the priest.

"I celebrated my 50th wedding anniversary along with Father Hoyer," Chiccone said. "I've had many memorable times, but that was the crown for me."

Father Hoyer, now pastor at St. Gregory Church in Plantation, returned the admiration. He reminisced over grandly presented liturgical celebrations, like Christmas and confirmation, plus community carnivals and the first Spanish Mass at any Broward parish.

"They're used to working with their hands, without resources, to build community," he said of Queen of Martyrs members. "And I didn’t have to cajole â they were willing to do whatever would move the church forward."

The Medina family alone counts three generations of service at Queen of Martyrs. Besides her work as parish secretary, Regina has served as director of religious education. She and husband Francisco have worked as a team couple for Marriage Encounter.

Their son Frank coordinates lectors and works in the church youth program, and all three have helped with Emmaus retreats. Daughter Teresa directs the youth group and serves as sacristan and extraordinary minister of Communion â and chairs the anniversary celebration.

Teresa's children, Priya and Chetan, are altar servers. And Frank's son Anthony, 12, is a lector.

"My parents taught CCD when I was Anthony's age, so it's part of our lives," Frank Medina said. "We were married here, and our kids were baptized here. Now, we teach our kids. Even if they move away, we've planted the seed." 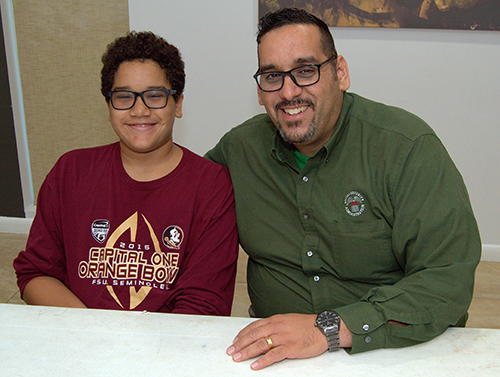 Frank Medina is in charge of lectors at Our Lady Queen of Martyrs Church. Son Anthony, a sixth-grader, is already a lector and altar server.

It seemed to work with Regina Ann Medina, Frank’s other child. Now that she's done with postgraduate classes at Florida State University, Frank has already scheduled her to serve as a lector. She'll also assist at retreats for students preparing for confirmation.

“Every time I go home, and I'm not at my actual home, I'm there [at church]," Regina Ann said. "I kind of feel like it’s where I belong.”

Also driving diversity was the merger of St. George Parish with OLQM in 2009. Members of St. George immediately began helping at Queen of Martyrs, in religious education and sacred dance.

“They had already been doing sacraments like confirmation with us,” Regina Medina said. “I think it was a gift from God to bring them to us.”

As the Fort Lauderdale area grew, Our Lady Queen of Martyrs shrank. People moved west; new cities were founded; so were new parishes like St. Bernard and All Saints. Piersall herself began attending St. Gregory in Plantation three years ago. And Regina Medina drives to church 25 minutes from her home in Plantation.

Although Queen of Martyrs is down to 600-650 families, the parish remains active under Father Flavio Montes-Colon, who was appointed in July 2016. It offers prayer workshops, religious education, and the continuing work of Respect Life, the lay Franciscans and the St. Vincent De Paul Society.

Through it all, Our Lady Queen of Martyrs has coped as it always has: with prayer, hard work and faith in its patron saint.

"I still believe in the power of prayer," Jessie Chiccone said. "For the priest, for Regina [Medina] and for the others working there."

Other News from Our Lady Queen of Martyrs Church

More articles about Our Lady Queen of Martyrs Church