St. John the Apostle parishioner fondly remembers 'Padrecito,' a priest for 67 years, as 'all love'

MIAMI | Newly divorced, with a young son, Michelle Gronkiewicz moved from California to Hialeah in 1987. She joined a prayer group at St. John the Apostle Church. And that’s where she met Father George Cardona — a friendship that lasted until his death last Friday, Jan. 15, 2021, at the age of 90.

“He was my counselor, my ‘padrecito,’” Gronkiewicz said, using a Spanish diminutive for “father” that encompassed both his kindness and his short stature. “Padrecito Cardona was all love.”

“He was the life of St. John,” said a fellow parishioner, Reina Rodriguez. “Everybody knew ‘el padrecito.’” 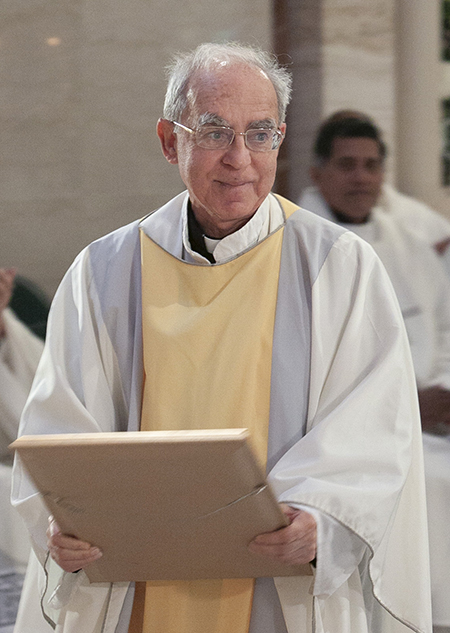 Father Cardona, a priest for 67 years, served as parochial vicar at St. John from June 1988 until his retirement in August 1995. But he remained in the area and Gronkiewicz, her sister, and other parishioners would visit him frequently — until the pandemic struck last year.

“When he saw us, he would get very sentimental and cry. But he would say, it’s out of joy,” Gronkiewicz said. In her view, the lack of visitors for the past nine months contributed to his demise. Although he was diabetic, she said, the disease was under control.

“He was my friend, my grandpa, my father. He supported me a lot. He helped me a lot,” Gronkiewicz said. “A good person with a lot of love. I love him so much and I will love him forever.”

Father Cardona also made her laugh. When he saw her and other members of the prayer group coming, she recalled, he would say, “Here come ‘las piadosas’” — the pious ones. And whenever she drove him and her sister anywhere, he would say, “Michelle is our guiding light.”

“He was really funny,” Gronkiewicz said. “He didn’t laugh but he made us laugh.”

She said it was comforting to know that he died having received all the sacraments and an apostolic blessing. “He is now in the arms of his Mother, Mary, whom he loved very much.”

Born in Mataró, Catalonia, Spain, Aug. 19, 1930, Father Cardona was ordained in Barcelona for the Piarist Fathers, May 30, 1953. After obtaining a bachelor’s degree from the seminary in Salamanca, Spain, he studied at Havana Business University for one year. He completed a second bachelor’s degree at Immaculate Heart of Mary College in Los Angeles after five years of study.

In addition to Spanish and English, he spoke Catalan, Italian and Latin and understood French, Portuguese and Rumanian.

He arrived in the Archdiocese of Miami in September 1966 and began teaching at Cardinal Gibbons High School in Fort Lauderdale. He taught there until 1968 and then again from 1973 to 1976. After spending a few months in residence at Sacred Heart Parish in Homestead, he became a chaplain at Mercy Hospital in Miami, serving there from 1977 to 1980. On Oct. 21, 1981, he became a priest of the archdiocese.

Susan Cordell - 01/27/2021 09:31 PM
To me you were a saint Fr. Cardona! You were always giving of yourself to others, always loving others, showing others your unconditional love for them. I always saw Jesus in you! You were an exceptional priest, very holy, very prayerful. You knew Jesus! You lived your life like a saint. I thank you for your wonderful example and love for the Lord, and for all of the ways that you helped me and how you brought Jesus to everyone that you encountered. I know that you went straight up to heaven! I know that God will reward you abundantly for being such a good and faithful servant of the Lord! You will be greatly missed!! We will pray for you and please pray for us! You will never be forgotten! Your sister and friend in Christ, Susan May you rest in peace!

Monica Vega - 01/25/2021 09:10 PM
The best! Padrecito, you were the light in the darkness. You led me to Christ as a young teenager. I loved you more than you knew. You are a true saint! Rest in the Lord now. Reap your Heavenly reward. You worked so hard for it.

Rita Sarmiento - 01/22/2021 11:24 PM
Dear friend, family priest, counselor, confessor, servant of God. So many beautiful & joyful memories. Thank you for journeying along side of me throughout the many stages of my life. Always reminding me of God's Unconditional Love and Mercy. Thank you for the laughter we shared too. Love youâ¤ Padrecitoð

Articles(32)
Events(1)
Our Lady of the Lakes Church