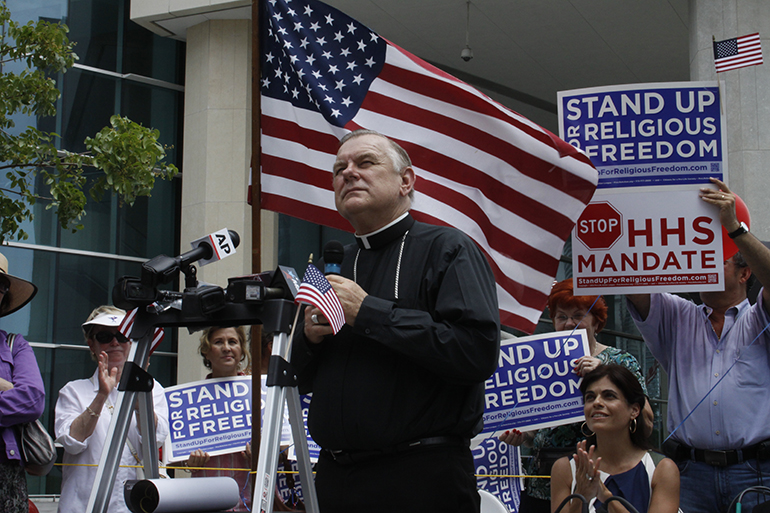 Archbishop Thomas Wenski addresses participants at a religious freedom rally in downtown Miami in this file photo from June 8, 2012. On June 22, 2020, he was named acting chair of the U.S. Bishops' Committee on Religious Liberty.

MIAMI | Archbishop Thomas Wenski of Miami has been appointed as the acting chairman of the U.S. Conference of Catholic Bishops’ Committee for Religious Liberty, following the death of Bishop George Murry, SJ, of Youngstown.

Archbishop Jose Gomez, president of the USCCB, made the announcement June 22, 2020. He thanked Archbishop Wenski for accepting the position and described him as “an energetic leader with a truly strong commitment to religious liberty and a servant’s heart for ministry.”

Religious Freedom Week began on Monday, June 22, and continues through June 29 under the theme “For the Good of All.”

“Religious freedom is under stress throughout the world. Even in our Western liberal democracies, discrimination against religion in general and Catholic Christianity, in particular, is growing — albeit in perhaps more sophisticated and less violent ways,” Archbishop Wenski said.

“Political analysts and human rights advocates do include religion on their agenda. But most emphasize ‘tolerance’ as if religion were only a source of conflict. Or, they speak about religion in terms of ‘individual choices,’ as if religion were merely the concern of an individual’s conviction and were devoid of any social consequences,” he added.

Archbishop Wenski said that protecting institutions of civil society, including libraries, newspapers, and universities is necessary for ensuring religious freedom.

“Freedom of religion ‘for the good of all’ must also encompass protecting those institutions that nourish the individual’s free exercise of religion,” he said. “The right to religious freedom has its foundation in the very dignity of the human person. Religious freedom is the human right that guarantees all other rights — peace and creative living together will only be possible if freedom of religion is fully respected.”

During the 2019 USCCB Fall General Assembly, Archbishop Wenski and Bishop Murry both ran for the position of committee chairman, and the two received the same number of votes from their brother bishops. The tie was broken by the fact that Bishop Murry was just under two years older than Archbishop Wenski, making him the winner of the election by seniority.

Bishop Murry was himself elected to fill the vacancy created by the resignation of Archbishop Joseph Kurtz of Louisville. Archbishop Kurtz had stepped down from the committee due to ill health as he continues to battle with bladder cancer.

Bishop Murry was elected for just one year, in order to keep the schedule of the committee elections and to finish out Archbishop Kurtz’s term. In November he would have been eligible to pursue a full term as chairman of the committee had he wished.

Archbishop Wenski will now finish out the remaining five months of what was originally Archbishop Kurtz’s term, and be able to run for a full three-year term at the 2020 Fall General Assembly.

He has also been part of the Committee of Pro-Life Activities as well as the Subcommittee on the Church in Latin America.