'For the good of all' 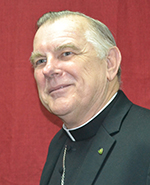 Archbishop Thomas Wenski published the following statement June 22, 2020, in his capacity as acting chair of the U.S. Bishops' Committee on Religious Liberty. The statement coincides with the annual observance of Religious Freedom Week, June 22-29.

Pope Emeritus Benedict XVI said when he visited Cuba as pope in 2012: “The Church lives to make others sharers in the one thing she possesses, which is none other than Christ, our hope of glory (cf. Col 1:27). To carry out this duty she must count on basic religious freedom, which consists in her being able to proclaim and to celebrate her faith also in public, bringing to others the message of love, reconciliation and peace which Jesus brought to the world.” (Homily, La Habana)

This religious freedom is, however, under stress throughout the world.  Even in our Western liberal democracies, discrimination against religion in general and Catholic Christianity in particular is growing — albeit in perhaps more sophisticated and less violent ways.

Political analysts and human rights advocates do include religion on their agenda. But most emphasize “tolerance” as if religion were only a source of conflict. Or, they speak about religion in terms of “individual choices,” as if religion were merely the concern of an individual’s conviction and were devoid of any social consequences. And so, in our country as in other Western countries, we see a tendency to relegate religion to the private sphere. And, in these countries, we see the courts chipping away at the original understanding of religious freedom. In order to fit new political agendas, religious freedom is being reinterpreted narrowly to mean merely “freedom to worship” but excluding the freedom to serve and the freedom to witness. 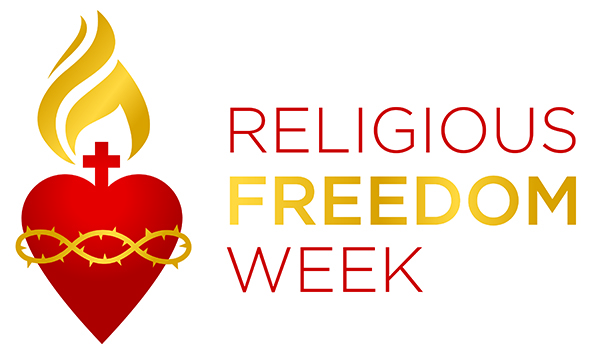 Religious Freedom Week is marked every year in the U.S., from June 22 to June 29, the feasts, respectively, of Sts. Thomas More & John Fisher and Sts. Peter & Paul.

Yet, just as freedom of speech depends not only on one’s right to say what’s on one’s mind but also on the existence of institutions like newspapers, universities, libraries, political parties and other associations that make up what we call “civil society,” so too freedom of religion “for the good of all” must also encompass protecting those institutions that nourish the individual’s free exercise of religion.

In this country, at least up till now, thanks to the religious freedom guaranteed by the first amendment, religious communities have been able to play an active role in society and to express their own vision of the human person and of the policies that rule society. This serves the “good of all."  The Civil Rights Movement of the 1960s was a religiously inspired movement; it was led by pastors, and those who marched gathered first in their churches.

Some today resent the public advocacy of religious people and communities. They accuse us of trying to impose our views on others. Yet, as St. John Paul II explained, the Church does not impose, she proposes. Dr. Martin Luther King, Jr. and his movement for racial justice could not impose their views on the American people. They understood this — and, for this reason, they opted for non-violence. But they made a proposition that touched the conscience of a nation.

The right to religious freedom has its foundation in the very dignity of the human person. Religious freedom is the human right that guarantees all other rights — peace and creative living together will only be possible if freedom of religion is fully respected.

Alexis de Tocqueville, a Frenchman who wrote approvingly about our American experiment in democracy in the early 19th century, said: “Despotism may be able to do without faith, but freedom cannot.” But even as de Tocqueville pointed out almost 200 years ago, despotism comes in both soft and hard forms. Thomas More, John Fisher, Peter and Paul and the first martyrs of the Church of Rome, whose feast days fall within our observance of Religious Freedom Week (June 22-29), were victims of despotism in its hardest form, as was John the Baptist, martyred for his witness about the truth of marriage. Today this type of hard despotism is decimating the Christian populations of the Middle East.

But in this country and in other liberal democracies, too often people of faith are being increasingly subjected to a soft despotism in which ridicule, ostracism, and denial of employment opportunities or advancement are being used to marginalize us.

For much of our nation's history, Catholics were regarded by many of their neighbors with suspicion, if not with hostility, because of the prevailing prejudice towards the Catholic faith in a predominantly Protestant America. Yet because of a healthy secularity promoted by our civil order and the Bill of Rights' first freedom, the freedom of religion, Catholics were able to prosper in America: We built parishes, schools, hospitals, orphanages and other charitable institutions; we started businesses; we served honorably in our nation’s wars and held public office. In other words, we availed ourselves of the opportunities made possible because of religious freedom and were able to fulfill our duty to engage the world and witness to our teachings, to our vision of the life and dignity of the human person.

"Authentic witness," Pope Francis reminds us, "is one that does not contradict, by behavior or lifestyle, what is preached with the word and taught to others." (Solemnity of Sts. Peter and Paul, 2015).

Religious Freedom Week is marked every year in the U.S., from June 22 to June 29, the feasts, respectively, of Sts. Thomas More & John Fisher and Sts. Peter & Paul. Look for more resources, including daily reflections, at: http://www.usccb.org/issues-and-action/religious-liberty/religious-freedom-week/index.cfm.