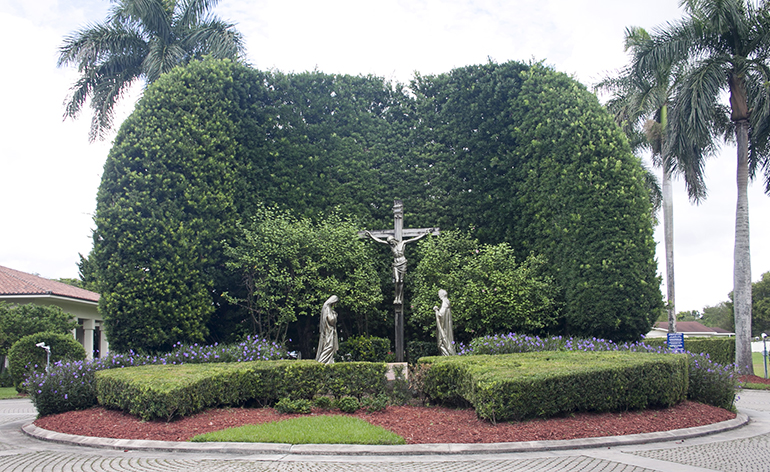 Entrance of Our Lady of Mercy Catholic Cemetery in Doral. The cemetery was consecrated in 1959 and serves South Florida’s Catholics. 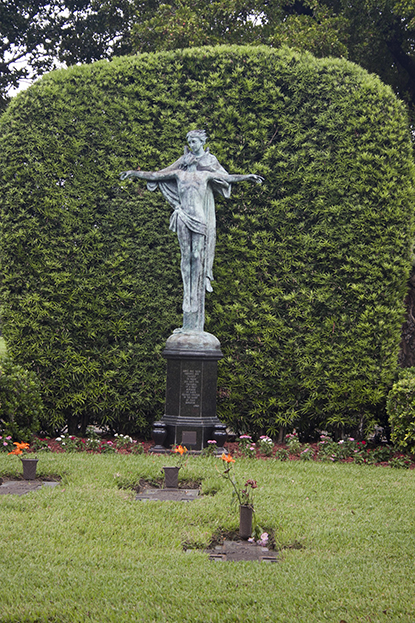 Section of Our Lady of Mercy Cemetery where rest the remains of the priests and Bishops of the Archdiocese of Miami.

MIAMI | When they were married in Cuba, he was 20 and she was 18. On the eighth anniversary of his death, Mercy James, 80, stood next to the grave of her husband, Alfredo James, at Our Lady of Mercy Catholic Cemetery in Doral.

For Mercy, visiting the cemetery means being closer to him. She said she gets very emotional when she gets ready to bring him flowers â the same ones he grew in their home garden when he was alive.

"I feel that he is always present," said Mercy, an extraordinary minister of holy Communion at Our Lady of Lourdes Parish in Miami, while stroking her husband’s tombstone. Someday, she will lie next to him, in the mausoleum of the cemetery’s chapel.

"I see this as larger than the sky, and I want to go to be in heaven with him," she said.

After the loss of a loved one, the cemetery "is where you will find comfort in a calm and peaceful environment," said Mary Jo Frick, executive director of the two Catholic cemeteries of the Archdiocese of Miami.

"My job is to comfort. I am a mother and I think we have to care for families as if they were our own,” Frick said, noting that both Catholic cemeteries are dedicated to the Blessed Mother: Our Lady of Mercy in Doral, and Our Lady Queen of Heaven in North Lauderdale.

For more than five decades â since being consecrated in 1959 by Bishop Coleman F. Carroll, shortly after the Diocese of Miami was created in 1958 â the Catholic cemeteries have served as a sacred, final resting place for South Florida’s Catholics.

"The natural beauty and the artistic beauty is what makes Catholic cemeteries different," said Father Kenneth P. Whittaker, pastor of Our Lady of Mercy Church in Deerfield Beach. 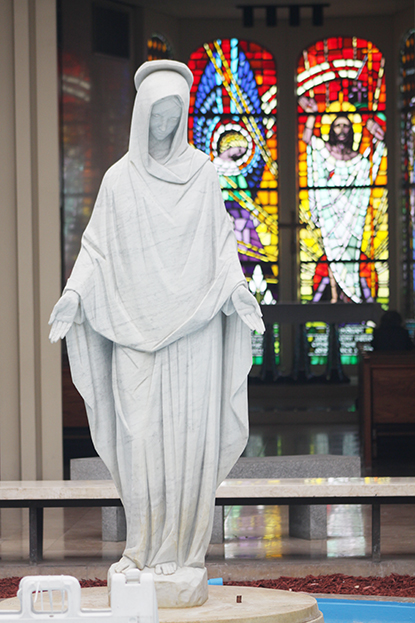 "We have great symbols and images to show our faith, and to that art, the directors who followed me have added the natural beauty we have in South Florida," said the priest, who served as director of both cemeteries from 1984 to 1996.

The first director was Msgr. James and the first funeral held at Our Lady of Mercy Cemetery was that of a priest, Father Malachy Monahan, buried in November 1958.

Originally, the cemetery was called Campo Santo (meaning Holy Ground) but it was renamed Our Lady of Mercy after its consecration.

Construction of the main chapel and mausoleum began in 1962. Then followed the Garden Mausoleums, the Mausoleums of the Resurrection, and last year the Ascension Mausoleum was dedicated.

The latter was built by one of the largest construction companies specializing in mausoleums and Catholic cemeteries in the United States. "When they help us design , they bring their experience of different Catholic cemeteries," said Leonardo Vargas, sales manager at Our Lady of Mercy Cemetery.

Currently, both cemeteries have between 120 and 150 acres of land. When they were newly opened, they only offered the traditional earthen burial.

Although "people are still buried in the ground, cremation has increased,” Vargas said. “But for convenience, the mausoleums are increasingly more popular." 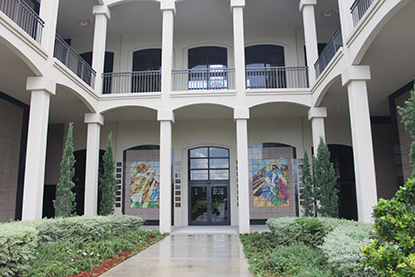 Interior of the Ascension Mausoleum at Our Lady of Mercy Cemetery in Doral, recently opened last year. 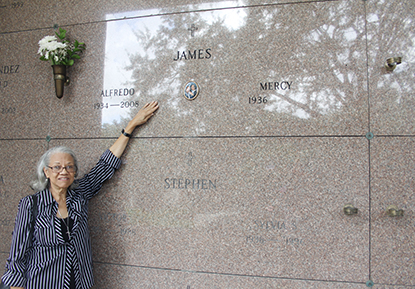 Mercy James, a parishioner of Our Lady of Lourdes Church, in Miami, stroke Alfredo James’ tombstone, her husband, at Our Lady of Mercy Cemetery in Doral. Mercy went to bring him flowers for the eighth anniversary of his death.

Some people are currently waiting for new buildings so they can be with their loved ones in death.

At Our Lady of Mercy, "we are working on expanding the Mausoleum of the Ascension of Jesus, recently opened. We will also work on the second phase of a building in the Mausoleums of the Resurrection complex," Frick said.

Cemetery staff also are working on the expansion of the mausoleum chapel at Our Lady Queen of Heaven, where a new area, called Monument Section, will open in the coming weeks. "We're almost running out of space for monuments in the cemetery," Frick added.

Although there are three chapels at Our Lady of Mercy and two at Our Lady Queen of Heaven, each cemetery is tied to a parish. The idea is to go any day to Mass and then walk to the cemetery.

The cemeteries do between 2,500 and 2,700 burials a year. "Sometimes we have up to 10 burials on Saturdays," Frick said, but each family receives its due respect and enough time to say goodbye to their loved one.

Planning the funeral and cemetery arrangements in advance is one of the most considerate things you can do for your loved ones, according to the Pre-Need Planning Guide of the Archdiocesan Catholic Cemeteries. And there are several benefits to being buried in a Catholic cemetery.

â¢ The Catholic cemetery is sacred ground. It is the only place outside the church where Mass can be celebrated.

â¢ The cemeteries are for Catholics and their families, even though all those buried there do not have to be Catholic. Families will not be separated.

â¢ The cemeteries are non-profit corporations. The money paid to be buried in a Catholic cemetery stays at the cemetery, within the Archdiocese.

â¢ Prices are competitive with other cemeteries.

â¢ Our Lady of Mercy is one of the most beautiful cemeteries in Florida.

"In addition, we offer prayer with the family on the anniversary of the death of their loved ones," said Deacon Jose Naranjo, who works at the cemetery.

At Our Lady Queen of Heaven, the Memorial Mass is celebrated on the third Saturday of the month.

Masses are celebrated at both cemeteries on Veterans Day and All Souls Day, usually by Archbishop Thomas Wenski and Auxiliary Bishop Peter Baldacchino.

Catholic Hospice also offers support groups in different parishes for those grieving the death of a family member or friend.

"People who bury their dead in a Catholic cemetery are giving their loved ones to the Church to take care of them, as we await the resurrection," said Vargas.

Exterior of the Ascension Mausoleum at Our Lady of Mercy Cemetery in Doral recently opened last year.