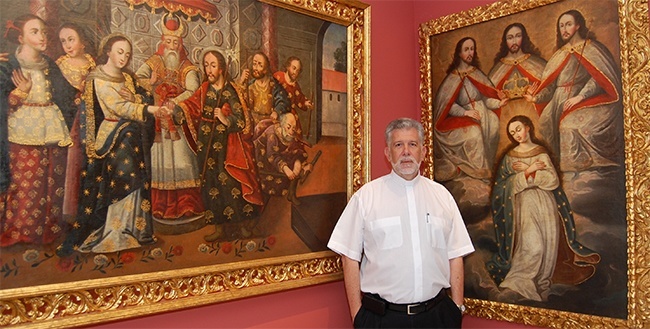 MIAMI | In a neighborhood of empty storefronts, faded paint and barred windows sits a treasure of beauty and knowledge.

For about a decade at Corpus Christi Church, Father Jose Luis Menendez has been gathering artworks from Latin American's under-appreciated colonial period, plus documents from Florida's Hispanic history â all housed in a replica of an old Peruvian church.

When finished, La Iglesia-Museo Perú de Nuestra Señora de la Merced will house one of the largest collections of art and history of its kind â 105 paintings and sculptures, plus 410,000 historical records â a grand display of family links between Florida and Latin America. 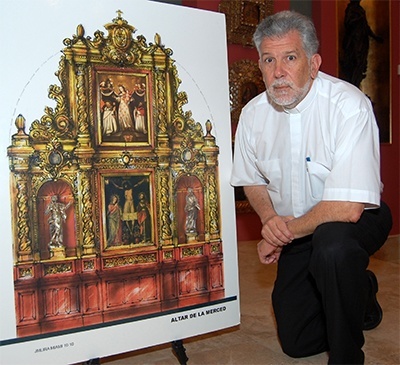 Father Jose Luis Menendez with an artist's rendering of the final appearance of altar at La Merced.

"We want to give back something to the United States for what it has given us," Father Menendez said during rapid-paced preparations for a concert at the archdiocesan museum-church this coming Saturday. "It accepts us and gives us a chance to build a new life. We give the gift of our culture."

The June 15 concert will give the public a rare opportunity to see the embryonic museum before it's finished. Frank Cooper, retired music professor from the University of Miami, will perform original pieces on a reproduction of a Baroque-era harpsichord.

Along with performers from the Frost School of Music, the concert will be a fundraiser for Corpus Christi to acquire the instrument. The price is expected to run about $18,000.

And La Merced, which seats up to 200, is the perfect venue for the refined sound of a harpsichord, Father Menendez adds.
"It's a place for people to see the beauty of Baroque art, while hearing the music of the period," Father Menendez says. "You’re surrounded by art. You can listen and watch in the environment in which it was created." 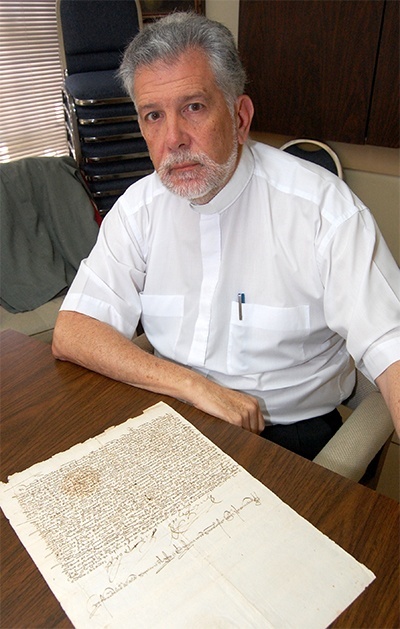 Father Jose Luis Menendez with one of the 10,000 original documents in the historical archive, which also has 400,000 digital copies of documents.

The four-story La Merced building is itself impressive during a tour with Father Menendez.

Crossing a broad plaza, you approach an ornate faÃ§ade built of coral from the Dominican Republic. You gaze up at twin spires that someday will support steeples.

You enter through towering cedar doors and walk on travertine stones from Brazil. Look to the sides to spot carved cedar columns from Bolivia. Look up to admire clerestory windows, made of translucent alabaster from Turkey.

"Nothing here is artificial," Father Menendez says with obvious pride.

The building forms an elegant setting for the oil paintings and statues, from the 17th and 18th centuries, all from a vast area including Mexico, Bolivia, Peru and Ecuador. They include:
That answer, in fact, comes close to the root of his drive to found the art museum itself: as a nonverbal conduit for spiritual truths.

"For people who couldn’t read, pictures were the catechism of their time," he says. "But the pictures showed not only facts but feelings â conveying, for instance, how Mary felt at the Annunciation. Then, people could identify with them.

"Art is spiritual. It can touch your heart, not only change your mind."

Half of the art collection is actually borrowed from an unnamed collector. To buy it for the museum will take $500,000. Whoever donates the cost will have the collection named after him or her.

"Some good Christian has to love art and history," Father Menendez says. 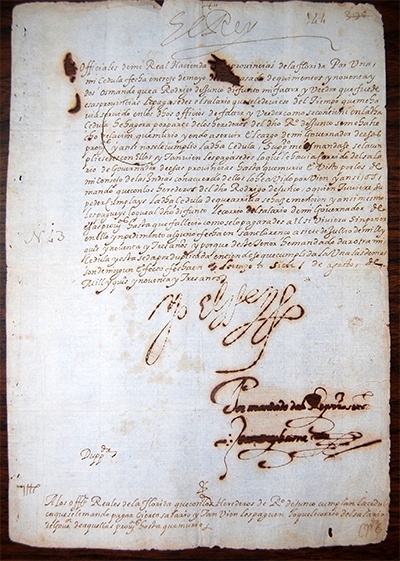 Image of a 1593 letter from King Philip II to a high official in Florida.

The museum was meant originally for Peruvian-Americans, one of the communities around Corpus Christi, the priest said. But the longer he worked on the project, the more he broadened the scope to other nations.

He wants to "change the mentality" of some South Americans who live here.  "Some people just want to come to the United States, make money and go back. Others want to come, make a home and offer the best of your home.

The historical collection is less eye-catching, but no less impressive. It includes more than 400,000 digitized documents and 10,000 originals, including:
Although he broadened the artworks to several nations, Father Menendez kept the focus to Cuba in the historical documents. He explains that from the 16th to the 19th centuries, Spain included St. Augustine and Havana in the same general region.

Spain controlled Florida until the 1760s, when it relinquished the land to England. Spain then retook Florida a decade later, only to cede it to the United States in 1821.

Just before the climactic Battle of Yorktown, George Washington's army was bogging down for lack of supplies. He appealed to France, which commissioned an admiral to help.

The admiral got donations from wealthy people of Cuba's Matanzas Province, which bought food, clothing and ammunition for the revolutionaries. The historical collection has a six-page document from the admiral with the complete account.

"After reading it, I was pleased as a Cuban-American that our people helped American independence," says Ray Zamora, manager of the Colonial Florida project.

Zamora is one of a core of influential allies who have gathered around Father Menendez's work. They also include Baptist historian Marcos Antonio Ramos, serving as a board member and historical advisor; and Carol Damian, director of the Frost, recently named curator of the colonial art collection.

Zamora, 68, began with art stores in the Washington, D.C., area, then became a private dealer for clients around the world. His focus shifted in 1975, when a Peruvian collector sold him 12 colonial-era paintings.

"Back then, you could give them away; they weren’t considered fine art," Zamora recalls. "But I looked at them and said 'My God, they're magnificent.'” He began to sell them, and they gradually caught on.

After he moved to the Miami area in 1985, a friend approached him about helping La Merced. Initially skeptical about the idea of a "church-museum," Zamora finally accepted Father Menendez's invitation for a tour â and found a couple of paintings he once owned.

Zamora first gave 5 percent of his time to the cause, then 25 percent, then "120 percent," he jokes. He even moved his office onto the premises.

"I love it; I'm giving back to the community," Zamora says. "This is a project for my kids, my grandkids, everybody. I'm happy that somehow, I helped this to happen."

It was in Spain, about 35 years ago, that Father Menendez gained his love for art and music. It's also where he got his first historic documents.

He was ordained in Madrid, where a priest had 150 documents â and gave them to him. When Father Menendez came to the Archdiocese of Miami in the 1980s, he began collecting others on his own.

By now, he feels driven to preserve and promote the historical records. Paper, after all, doesn’t last forever.

“The loss of documents is a loss of memory," Father Menendez says. "We need to know as much as possible now. History belongs to all of us."

He still needs $1 million to acquire the remaining pieces of art and finish the chapel building. He is also seeking a $2 million endowment for a chair at a university for the study and publication of the historical archives.

The third phase of the project would make an even bigger dream. It includes a language school, a convention center and a parking garage.

Father Menendez is well aware that Corpus Christi is an inner-city parish, lacking the deep pockets of more prosperous churches. Why, then, locate such a project there? He has a surprising answer: education.

"When you’re in a poor neighborhood, you have to help people leave their poorness behind. People stay poor because their self-image is poor. We want to break them out of that jail. Breaking the limitations of home and life is what art does."

At 66, the priest knows he may not see his artistic-historical Promised Land finished. He's fine with that.

"That’s the problem of the Lord, not my problem," Father Menendez says with a smile. "You have to be faithful to yourself at any moment.

"I may not see it, but I believe the Lord will finish it." 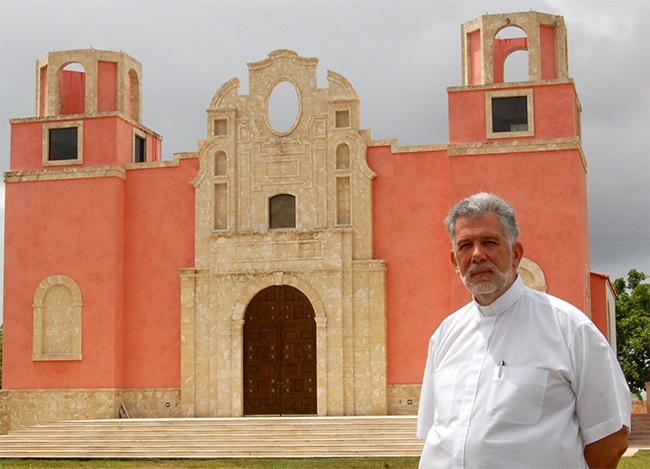 Father Jose Luis Menendez outside La Merced, the church-museum he is creating for the archdiocese.

Pat - 06/14/2013 08:05 PM
Loved the article. I can resonate with so many aspects of it...Art is spiritual... It touches the very essence of what it means to be human, and therefore God's...What a joy to have a place in the context of Church, where
we can experience this. It is where faith, culture, art merge, a space which the society in which we live, is so much lacking in...And yes, it is so appropiate to have a place like this precisely where it is, to help awaken in all, what it is a God given...

Olga - 06/13/2013 08:50 PM
That's great! is the best thing you can do to remove the blindfold of the believe that with to give food and clothing to poor have gained heaven.

D. Ann Saladino - 06/11/2013 06:10 PM
Can't wait to be surrounded by that wonderful collection in a building which is itself art and to have the added gift of the harpsichord music of Frank Cooper and Frost School of Music! Fr. Menendez, you are gift.

Mike Schwager - 06/11/2013 10:20 AM
Excellent article. Was impressed with the depth and breadth that writer/reporter Jim Davis brought to this piece. Very important historical/cultural information. Congratulations!