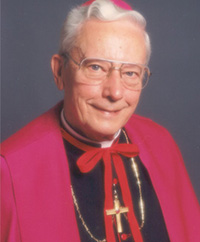 Archbishop Edward A. McCarthy, a native of Cincinnati and founding Bishop of Phoenix, arrived in Miami Sept. 17, 1976, as coadjutor, succeeding to the see less than a year later, upon the death of Archbishop Carroll in July 1977.

Whereas Archbishop Carroll was a builder, Archbishop McCarthy saw his mission as blowing Spirit into the edifice built by his predecessor. He continued to found new parishes to keep up with the growing numbers of new Catholics. But he also established a Family Life office and a Lay Ministry office that became a model for the rest of the nation. Both were led by lay people, a hallmark of Archbishop McCarthyâs tenure. He consistently strived to call forth the gifts of the laity and empower them at the archdiocesan level.

Administratively, he re-organized the archdiocese into seven major divisions and oversaw the construction of a new chancery to house them all. The renamed Pastoral Center was dedicated at 9401 Biscayne Blvd. in Miami Shores in April, 1983. 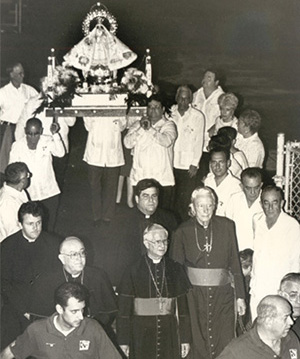 On Feb. 6, 1979, two new auxiliary bishops were appointed for Miami, including the first native Cuban to serve as a bishop in the United States in 200 years: Auxiliary Bishop AgustÃ­n RomÃ¡n. (His âepiscopal twinâ was Auxiliary Bishop John J. Nevins, another archdiocesan priest.)

In 1980, Archbishop McCarthy announced the start of a five-year plan of evangelization. That same year, the Mariel boatlift brought nearly 125,000 Cuban refugees to South Florida. Haitians began arriving in significant numbers as well.

Throughout the next decade, Archbishop McCarthy spoke forcefully on behalf of the Haitiansâ right to plead for asylum in this country, and against presidential directives that call for high-seas interdiction of boatloads of Haitian refugees.

On its 25th anniversary in 1983, the eight-county archdiocese included more than 896,000 Catholics, with 135 parishes and three missions, served by 312 diocesan and 210 religious order priests; 643 women religious and 63 men religious; and 45 permanent deacons. In 1984, the Kenedy Directory listed the Archdiocese of Miami as the second fastest growing See in the nation.