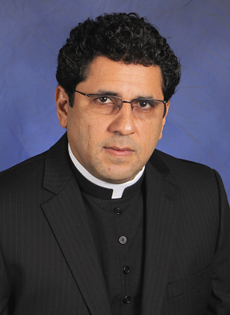 Born June 22, 1969, in LeÃ³n, Nicaragua, Father Paguaga is the oldest of four children. He arrived in the United States Dec. 1, 1989, after a one-month, $2,000 journey from Guatemala. He worked in the construction industry, at fast-food restaurants and washing dishes before entering the seminary in 1991. He was ordained a priest for the Miami Archdiocese in May 2000, and served at Our Lady of the Lakes in Miami Lakes before being assigned to Little Flower last summer.

Why he came to the United States:

"To come, work, save, help my family and go back after six or seven years." His father had died in 1984, and the family had moved to Guatemala, partly due to the political troubles in Nicaragua. The family's pharmacy had been looted; their grandfather had been kidnapped.

He was one of the first cooks at the McDonald's on S.W. 87th Avenue and 24th Street in Miami. He also worked at Burger King and as a busboy at the Radisson Hotel. At one point, he held three jobs simultaneously. "I'm very proud of it. If you want to work, you will find work. If you want to get ahead, you can get ahead."

He first asked his mother for permission to enter the seminary at 6. At 14, he attended a charismatic retreat for young people. "I remember saying, 'This is what I really want to be.'" His father's response: "Over my dead body." He tried to enter the seminary in Guatemala but his mother asked him to wait. After coming to Miami, "I knew I didn't want to stay (in the United States) to make money but to serve the people. I saw the need here. An immigrant can best understand an immigrant."

"The Golden Girls", "Touched by an Angel" and the Discovery Channel.

"It's almost like God brought me here and opened the doors because in less than two years I was in the seminary. It couldn't have been more clear that God wanted me to be here." 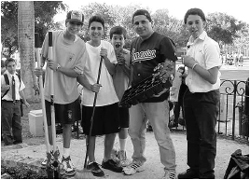 He was studying civil engineering at the University of Guatemala. "The thing is, I don't see myself doing something else other than being a priest. This is what I love. Sometimes I feel guilty that I get paid for what I do."

"Sometimes people don't see us as human beings with the same needs and feelings as others. We come from a family. We sat for many years in the pews where people sit and listened to the liturgy. We're real. We weren't born wearing vestments."

Transfers: "You get to love your people, you devote yourself to them, and then you have to move."

"That my father didn't see me ordained because, actually, he would have been extremely happy with me. My father was never able to see his son fully realized as the man he wanted to be.

"My mother - her faith and trust in God, her simplicity, her sense of humor. She has never complained to God or anybody else for all the things that she has been through in her life."