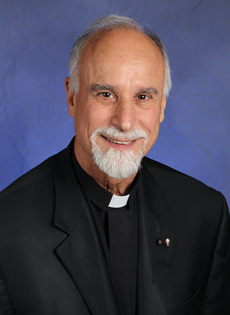 The son of a Cuban mother and Italian father, Father Alfred Cioffi was born in Havana, Cuba, Nov. 5, 1952, the older of two brothers. The family left Cuba in 1960 and lived in New Orleans and New York before moving to various countries in Central America. (His father worked for the airline Alitalia.) After high school, the young man came to Miami to study marine biology. In 1973, he received his undergraduate degree in biology from Florida International University but was not accepted for postgraduate work at the University of Miami's Rosenstiel School of Marine and Atmospheric Science.

After working at a fish farm, taking time off to care for his ailing mother and teaching at Miami's St. Brendan High School, he entered the seminary in 1980 and was ordained for the archdiocese on May 11, 1985. Father Cioffi served at Epiphany Parish in South Miami before being sent to Rome to obtain a doctorate in moral theology.

Upon his return, he taught at St. Vincent de Paul Seminary in Boynton Beach and served five years as pastor of St. Kevin Parish in Miami before being sent to Purdue University in Indiana to obtain a doctorate in genetics. Because of Father Cioffi's expertise in this controversial field, the Archdiocese of Miami has "lent" him to the church at large.

Currently Fr. Cioffi is In Residence at St. Monica Church.

Titles of his doctoral dissertations:

Moral theology: "The Fetus as Medical Patient: Moral Dilemmas in Prenatal Diagnosis From the Catholic Perspective." Genetics: "The Relationship Between the Structure and the Function of Chromosomes."

After graduating from FIU, he got a job taking care of tropical aquarium fish at a fish farm on Sunset Drive in Miami. "It was a lot of fun. I would take care of the fish all day. The weekends I would be sailing and diving and dating and dancing â and I was getting paid for it."

"My best recommendation for TV is to shoot it before you throw it out the window."

"I love nature. Through nature, I had a deeper relationship with God." As a teacher, he also "wanted to reach the teenagers at a deeper level, a more spiritual level; especially to try to help them not commit some of the mistakes that I had made when I was a teenager." Finally, taking care of his bedridden mother for more than a year "brought forth a generosity in my life." Until then, "I would have said 'I'll be a nun before I become a priest.' Those were the chances."

"That was a big sacrifice, and it is daily," although it has a practical advantage: "just being available for the people."

Confession, "because I've had to use it a lot. But seriously, to think that people, total strangers, come to us with their conscience in their hands. They tell us things they don't tell their spouse. It's a very privileged moment that we have."

What he does for fun:

"It's a Wonderful Life" and "The Passion of the Christ."

"My best recommendation for TV is to shoot it before you throw it out the window. The happiest moment of my life was when I gave up TV. I'm addicted to TV, you see, so when I turn it on I can't turn it off."

"All the sins of my life: being too wild, too young." 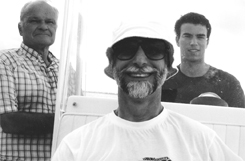 At home on the water: Would-be marine biologist Father Alfred Cioffi, center, during a diving trip with cousin-inlaw, Richard Jung, and his son, Ricky.

"I started smoking at 11." As a teenager in Central America, he and his friends would compete to see who could find a good wedding to crash and then be the first to get drunk. "It's by sheer miracle that I'm alive. â¦ I have been the cause of my parents' sanctification."

"That the scandal is not over."

"Convincing a mother not to have an abortion."

Not much anymore, but "I used to collect coins, stamps, plants, animals, women, fossils. You name it."